Fighters, Energy in Focus in India 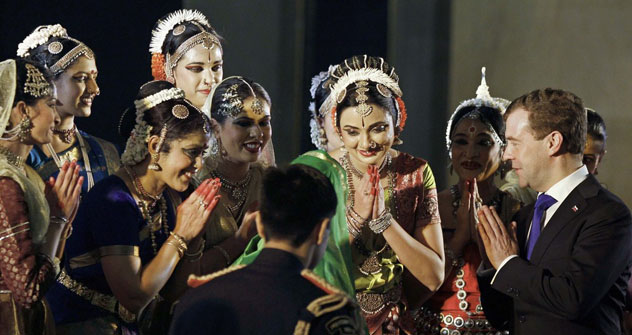 Medvedev being welcomed to an official dinner in New Delhi, December, 21. Source: Reuters/Vosock-photo

President Dmitry Medvedev and his delegation of more than 100 business leaders wrapped up the second day of their visit to India on Tuesday by signing over 20 agreements, including fine-tuning the design of advanced fighter jets that will be jointly manufactured.

Medvedev spoke of the “privileged partnership” between New Delhi and Moscow and praised the “special affinity, friendship and predictability in our relationship” during a press conference with Indian Prime Minster Manmohan Singh, who accepted the president’s invitation to visit Russia next year.

“India is a very attractive bride, and everyone is trying to date her,” said Ruslan Pukhov, director of the Center for Analysis of Strategies and Technologies in Moscow. “We used to be, we are, and it looks as if in the near future we will be the No. 1 supplier in India.”

According to the Russian Center for Analysis of International Weapons Trade, India will account for 54 percent of Russian arms exports from 2010 through 2013, estimated at more than $15 billion.

The contract signed between Rosoboronexport and Hindustan Aeronautics Limited relates to the design modifications for fighters to be bought by India. The value of the entire contract is unofficially estimated to be about $30 billion. Each of the expected 300 jets will cost between $85 million and $100 million, with deliveries to begin in 2017.

Reflecting a growing trend toward local sourcing and technology transfer, the core elements are being developed by Sukhoi while the Indian partner will be involved in some technical aspects of the project including electronics, navigation systems, cockpit displays and the development of a two-seater version of the fighter.

Indian leaders also reaffirmed a commitment to provide a site for a third nuclear power plant to be built by Russia, said Rosatom head Sergei Kiriyenko. Analysts say the new project has a potential price tag of $24 billion and will also involve local supplies and manufacturing.

Though facing competition from Japanese, French and U.S. firms, “over the next 15 years there is a significant chance that every second reactor that Russia builds abroad will be built in India,” said Anton Khlopkov, Director of the Center for Energy and Security Studies.

There are already two nuclear facilities under construction by Rosatom in India, with one reactor at the Kudankulam plant expected to be commissioned in the first quarter of 2011. There will be up to six reactors built at each site.

In the aerospace and defence sector, a deal was signed in which Russia will supply missiles to the Indian army. No financial details were released. Medvedev also highlighted Indian-Russian cooperation over the Chandrayaan-2 spacecraft and the Glonass satellite navigation system.

An energy agreement was signed by Energy Minister Sergei Schmatko and Oil and Natural Gas Minister Murli Deora committing the two countries to broader cooperation in the oil and gas sphere, including liquefied natural gas.

December, 20 Medvedev said in an interview with the Times of India that Russia was considering the possibility of participation in a gas pipeline that will connect Turkmenistan, Afghanistan, Pakistan and India.

Geopolitical discussions also touched on regional problems. The Kremlin said in a press release that Russia and India were looking “to create an anti-terrorist and anti-narcotic belt” around Afghanistan. Russia held a rare joint battalion-level counter-terrorism exercise with India in October.

The Soviet Union traditionally had very strong ties with India in the fields of defense and energy. Analysts say the relationship suffered after the breakup of the U.S.S.R. and is now under pressure because of other countries’ attention to India’s emerging market potential.

But the two countries still have a lot in common including a “deep mistrust of China and combatting Islamic militants,” said Pukhov, of the Center for Analysis of Strategies and Technologies.

“We are complimentary, and we feel very comfortable with India,” he added.

Medvedev said Tuesday that bilateral trade will increase by 50 percent over this year’s figure to reach $15 billion in 2015, but this pales in comparison with Russia’s trade volumes with Europe or China.

Other countries are getting on line for a slice of the Indian pie. British Prime Minister David Cameron visited India in July, followed by U.S. President Barack Obama, French President Nicolas Sarkozy and Chinese Premier Wen Jiabao. Each visit resulted in announcements of business deals worth billions of dollars.

Analysts assert that the Indian market is large and growing. “The sky is big,” said Pukhov, quoting a Russian proverb, “and there is enough of it for everyone.”