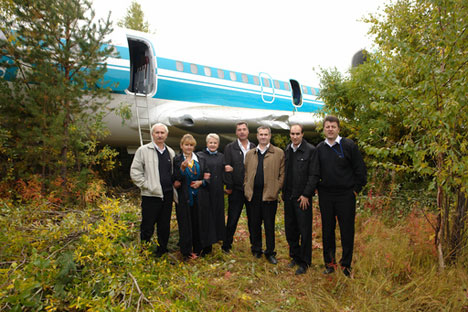 An ordinary man in the Russian taiga saved 80 lives just by doing the right thing without any expectation of reward.

It’s only natural to yearn for a miracle during the holiday season. The incredible rescue of the crew and passengers of a Russian Tu-154 jetliner was one of just such miracles this year. It all happened on Sept. 7, 2010, when a flight took off from Yakutia on its way to Moscow over the Republic of Komi. All onboard systems suddenly failed. The airliner suddenly became silent and pitch black inside. An emergency landing was in order, but where? There was nothing but coniferous forest, or taiga, for hundreds of miles all around us. There was no way to head for the nearest airport, because there wasn’t any way to know where it was. The pilots, nonetheless, decided to land anyway. To make matters worse, the sky was shrouded in clouds. Suddenly, a ray of light broke through the murky fog. The pilots were staring diligently at the ground in an effort to discern a more or less flat piece of land, when out of nowhere a runway appeared. “At first we thought we were hallucinating – a runway in the forest, are you kidding?” the crew members recalled later. They landed the plane thanks to a glass of water that they placed on the dashboard to use as an improvised clinometer. The passengers had no idea their lives had been hanging by a thread; they only realized something was wrong when they saw the plane’s wings chopping off treetops after it slightly overshot the runway. Fortunately, the landing went as planned, and not one of the 80 people aboard was hurt.

Meanwhile, air traffic controllers, who noticed the plane had disappeared from radar, were preparing for the worst. When it transpired later on that everyone escaped unscathed from such a seemingly hopeless situation, the word “miracle” was on everyone’s lips. The heroic crew was featured in newspaper headlines and a documentary was made about them. Russia’s president received the pilots and awarded them with the country’s highest honor, the Hero of Russia distinction. All as expected.

There is, however, one more hero to this story, without whom there would be no happy ending. His name is Sergei Sotnikov and he is the head of the Izhma Airport. Sotnikov has spent a full 20 years voluntarily maintaining the runway that received the ill-fated flight.

Once upon a time, Izhma had a real airport where flights took off from every day headed throughout the Russian North. There are no roads in the taiga, and transport is done either by river or air. During the Soviet era, the locals didn’t feel isolated because they could hop on a plane anytime they liked to spend a weekend in St. Petersburg. Today, few can afford this. Once Russia switched over to a market-based economy, flying became much too expensive. The Izhma airport used to employ 130 people. Today, Sergei is the only one left, employed part-time for a couple of months a year when the airport is used as a helipad. In such conditions, any runway would normally have been overgrown and would have become part of the surrounding forest. But Sergei didn’t let this happen. He cleared the strip regularly, and keep the locals from using it to stockpile firewood.

Why would he do this? At first he believed that local aviation would recover, bringing back some normality to people’s lives in the neighboring communities. Afterwards, when this hope died out, he says he kept maintaining the runway “for himself,” so that it would remain in order. As a result, he helped save 80 lives.

Sergei Sotnikov didn’t receive a state award. Indeed, why award him anything at all? He didn’t do anything special after all – he was just maintaining a runway. But Russian bloggers made him, not the pilots, the real hero; there’s logic to this, too. Granted, the pilots did a great job. But they’re professionals trained to deal with emergency situations, and you could give them an A for the job they did. Sergei Sotnikov, meanwhile, is an ordinary person who maintained the runway. He didn’t have to take care of the runway in the first place, because he had been fired several years prior and was just a part-time worker.

The gist of what the bloggers had to write about Sergei was that he’s a real hero and a real man. Such people are Russia’s hope for a better future. Is this going over the top? I don’t think so. In fact, we’re all tired of the type of hero the TV and other mass media have been shoving down our collective throat, like all those thieves, thugs and oligarchs. It would seem there are no longer any normal people around to speak of. But that’s not the case at all, and you can find them all around you, like those who keep cleaning up their planet just like Antoine de Saint-Exupery’s Little Prince did. Sergei Sotnikov let everyone trying to make the world around them a better place know that their efforts aren’t in vain, that they will certainly succeed sooner or later or even save somebody’s life. I would say that it’s good to believe this, especially should your plane ever need to make an emergency landing: there will be someone on the ground that had prepped a runway for you.

Meanwhile, the bloggers are collecting money to buy a snowmobile for Sergei; they have already raised almost $8,000. I think, however, that for him, resurrecting the Izhma airport would be the best gift.