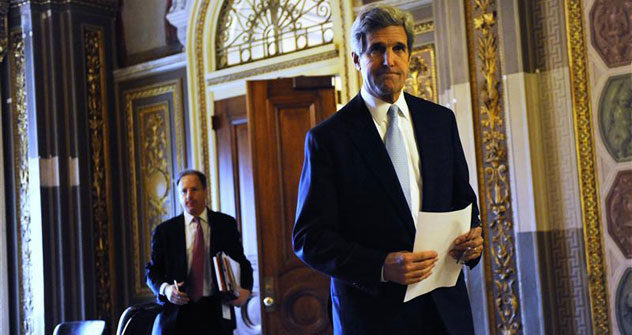 U.S. Senator Kerry walks to the Senate floor during debate over ratification of the START treaty at the U.S. Capitol in WashingtonSource: Reuters/Vostock-photo

After much deliberation, the U.S.-Russia reset gets a boost with the signing of the New Start treating and the 123 Agreement.

Many expected it would be very close, but it wasn’t. In the end, 13 Republicans joined 56 Democrats and two Independents to vote for the ratification of New START, a nuclear arms control treaty between the United States and Russia signed by U.S. President Barack Obama and Russian President Dmitry Medvedev in April.  The margin of victory, 71-26, was comfortably above the threshold of 67 votes needed to approve the treaty and to gave President Obama a major foreign policy win.

The president couldn’t have a better Christmas present. But similar to a child who eats his vegetables to please Santa Claus, the president, too, had to work hard to earn such a gift.  Over the past week, Obama has placed numerous phone calls to Republican Senators begging for their “Yea” votes. On Sunday, he sent a letter to the Senate with a pledge to fully develop U.S. missile defense system (ABM) in Europe, something that a number of Republicans asked him to do as a condition of their support. On Monday, the Senate received another letter, this time from Adm. Mike Mullen, the nation's top military officer, in which Mullen stressed that the treaty made perfect military sense.  Mullen’s letter seemed to carry a special weight for the Senate Republicans because of their traditional willingness to side with the military brass on issues of national security.

The administration’s efforts evidently paid off: One after another, Senate Republicans began voicing their support for New START.  On Tuesday, the day before the final vote, it became clear that the treaty ratification has gained a momentum that couldn’t be stopped. The Wednesday vote just confirmed that.

New START has become the first arms control treaty in U.S. history ratified during a lame duck session of the Senate. It also turned out to be the first arms control treaty between the U.S. and Russia whose ratification became the subject of such a sharp partisan divide. Yet the relatively close vote on New START compared with the votes on earlier, similar treaties such as START I and START II, shouldn’t be taken as a sign of growing mistrust of Russia.  Quite to the contrary: no mainstream politician in the U.S. would consider Russia’s strategic nuclear forces an imminent threat to U.S. national security.  The consensus among the American political class, including many critics of New START, is that there is an increasing danger of nuclear attacks originating from so-called rogue states, such as Iran and North Korea, and non-state actors, and that this danger can only be adequately addressed by the deployment of ABM.  From this point of view, the major “sin” of the new treaty, in the eyes of its critics, is that it is a distraction from ABM at best or an impediment to it at worst.

It is safe to say that in the foreseeable future, no follow-on strategic arms reduction treaty with Russia will be taken into consideration by the U.S. Congress unless such contentious issues as ABM systems in Europe and Russia’s advantage in tactical nuclear forces are resolved.

Completely overshadowed by the drama of the New START ratification process was the passage in the House of Representatives of the U.S.-Russian 123 Agreement on civilian nuclear cooperation. Initially submitted to Congress by President George W. Bush in May 2008, the agreement was withdrawn in August 2008 in the wake of the Russian-Georgian war. The Obama administration resubmitted the agreement this past May.  Such agreements don’t require formal approval of Congress and would enter into force by default after 90 days of continuous session of Congress unless Congress passes a resolution explicitly rejecting the agreement. Two such resolutions have indeed been introduced, but failed to gain traction.  Many observers attributed the failure to block the agreement in the House to Russia’s decision to ban the sale of S-300 missile systems to Iran.

The significance of the 123 Agreement is difficult to overestimate. In the short run, it will allow Russia to become the largest supplier of uranium fuel for U.S. nuclear power stations. In the long run, it will provide incentives for U.S. and Russian companies to share nuclear technology and materials, carry out joint research and development activities, and bid jointly on civil nuclear projects. The agreement will serve as a powerful building block to the foundation of full-fledged economic cooperation between the two countries, something that U.S.-Russian relations are so sorely missing.

With the 123 Agreement and New START in effect, 2010 becomes a good year for the “reset” in U.S.-Russia relations. Yet, both were “low hanging fruit,” and achieving further progress in the relationship won’t be easy. It definitely won’t help that the Obama Administration will face a more confrontational Congress, with some congressional Republicans hungry for revenge. It won’t help, either, that the administration doesn’t seem to have a coherent Russia policy and formulating one will be difficult given the plethora of thorny domestic issues (and the looming re-election campaign).

Russia should adjust accordingly and show some patience and understanding.  Its focus in 2011 should be on Russia-NATO cooperation on ABM in Europe. Any serious progress in this area will give a simultaneous boost to U.S.-Russia relations, too.  Perhaps, this is something President Obama may ask Santa Claus for Christmas next year.