Russia and Poland must face the future together 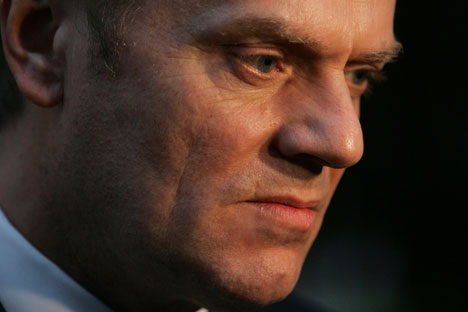 This year has been a turning point in Russian-Polish relations, but the work is far from done.

Nine months after the devastating plane crash, the aftershock of the Smolensk disaster still lingers awkwardly in Polish society. Televised images of the smouldering TU-154 wreck carrying the Polish president and most of the political elite struck a nerve with Poles – it was more than just an air crash. Many of the 96 dead are buried in Warsaw’s Powazki military cemetery alongside Poland’s war heroes and freedom fighters. Bayonet-bearing soldiers stand guard next to a Smolensk memorial, hidden behind a mountain of flowers.

The tragedy brought Poland and Russia closer, but not as close as initially anticipated. Hopes were raised that the shared suffering would propel the two countries towards a lasting reconciliation. But the raw emotional bonds created by the April 10 disaster have not been enough to cut through a centuries-long legacy of suspicion. The recent Russian investigation into the crash – which absolves Russian authorities of all blame – shows how easily the spirit of goodwill can come undone. This is a testing moment, then, for Polish-Russian relations and for Russia’s relationship with the European Union. If Russia is to cement friendly ties with its Western neighbors and the European Union, then it must go beyond the limited candor expressed in carefully choreographed moments. It is time for Russia to come clean – not only about its failings to avert the Smolensk accident but also about other chapters in its past.

The Russian plane crash report handed to the Polish leadership this month has soured the political climate. Polish Prime Minister Donald Tusk said the 200-page report was unacceptable and that some of the conclusions were “without foundation.” The Polish side has sent the Russians 148 pages worth of questions and corrections. The Poles admit that serious mistakes were made by the president’s pilot, but believe that the Smolensk authorities didn’t take the necessary precautions and shouldn’t have given permission to land given the difficult weather conditions.

It remains to be seen if the report’s findings will seriously damage relations. The investigation follows several months of saccharine relations between Moscow and Warsaw. In early December, Russian President Dmitry Medvedev came to Poland on a two-day visit. It was the first time in eight years that a Russian president has come to Warsaw for political talks. On the back of several agreements strengthening economic and cultural ties, both leaders hailed the visit as a significant step forward. President Bronislaw Komorowski went as far as to say that the bad drought in Polish-Russian relations was over. What it did illustrate was how strained contacts have been: the Russian president usually visits Finland, a smaller neighbor, twice a year.

"The Russian plane crash report handed to the Polish leadership this month has soured the political climate."

What the crash did was make it easier for both sides to shift gears in their relations. The momentum began earlier in 2009 when Russian Prime Minister Vladimir Putin travelled to Poland to condemn the Nazi-Soviet pact that sliced up the country in 1939. Another step in the right direction was made this year when the Russian leadership officially showed remorse for the Katyn massacre of about 22,000 Polish army officers in 1940. The crime had for many decades been an open wound in Polish-Russian relations, as Moscow pinned blame for the massacre on the Nazis.

As far as the Russians are concerned, the issue is now resolved. The Poles see it differently: as the hoped-for beginning of a process in which the Kremlin exhibits full candor about Soviet wrongdoings. Moscow though has still not supplied vital archive material on Katyn, and Polish commentators accuse Russia of using different voices when speaking about Katyn. Although Putin and Medvedev have acknowledged Soviet guilt for the massacre, military state prosecutors continue to shirk Russian blame and reject calls for compensation.

The course towards normalization was edged forward by the election of Komorowski in July. There is no doubt that the election of Jaroslaw Kaczynski – Komorowski’s main contender and the twin brother of the deceased president – would have given Polish-Russian relations a far more confrontational narrative.

Set to a funereal public atmosphere, the Komorowski-Kaczynski showdown was one of the most bizarre – and muted – political campaigns to date. The snap election faced numerous obstacles of Biblical proportions: from the volcanic ash that brought Europe to a standstill, to the flash floods that swept Poland in the run-up to the elections. It is a testament to the strength of the democratic process in Poland that the country returned to business-as-usual so soon after the crash.

But what exactly is “normal” in the spiky relationship between Warsaw and Moscow? It seems to come down to this: Russia has come to realize that it pays to be on good terms with Poland. Friction with its western neighbor has hampered the forming of closer ties with the rest of EU, in which Poland plays an increasingly prominent role. Close relations with the EU are crucial for Russia if it hopes to modernize its economy.

In the past, Putin by-passed Poland and chose instead to strengthen ties with Germany and France. Although Putin has not discarded his Westpolitik – as he reminded us this month with his heavily-accented rendition of Blueberry Hill to an admiring Hollywood audience – it has proved to be not enough. Facilitated by the election of a more pragmatic Polish leadership in 2007, Putin has gradually reached out to Poland. He is no longer relying solely on Germany to champion Russia’s cause in Europe.

Poland, which takes on the EU presidency in the second half of 2011, has also been changing. Buoyed by its EU and NATO membership, Poland feels more confident in its dealings with Russia. An inherent fear and hatred of Russia – felt by a string of Polish leaders, from Pilsudski to the Kaczynskis – has developed into a desire by the Polish leadership to tame Russia, to civilize it.  According to this scenario, Poland would simultaneously be a partner, a rival, but also a successful model of transformation for Russia.

What has also changed in the past decade is Poland’s political geography, a sense of what is west and what is east. Speaking in Warsaw in 1990, Henry Kissinger started a speech by saying: “I’m delighted to be here in Eastern, I mean Central Europe.” For the rest of his talk he kept saying “Eastern, I mean Central Europe.” This slip of the tongue would not happen today. Poland is confident of its position in the heart of Europe but is in a good position to supply regional leadership to the new Eastern Europe. At least two of its neighbors, Ukraine and Belarus, are in an uneasy limbo. Poland’s natural instincts are to reach eastwards. But it can only do this with, and not against, Russia. In the meantime, Poles are waiting for Moscow to face its past.

Philip Boyes is a speechwriter for a leading EU politician