Russia settles its score with history 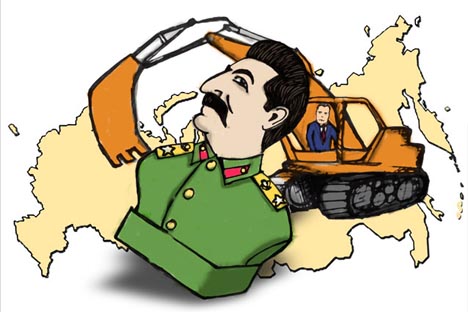 As Russia’s post-Soviet political structure continues to develop, the government is showing signs of moving irreversibly towards true democracy and away from authoritarianism.

Two of Medvedev’s recent moves illustrate the differences between himself and Putin, as well as his concern for how Russia is viewed in the world: the apology to Poland for the Katyn massacre, and the decision to engage in the de-Stalinization of Russian society. In 1940, 20,000 Poles – among them a great number of army officers – were executed by a NKVD firing squad under Stalin’s orders and in compliance with the Molotov-Ribbentrop Pact between the Soviet Union and Nazi Germany. The Soviet government kept the truth about the massacre a secret, attributing the carnage to the Nazis. By admitting who is really responsible for the Katyn massacre, Medvedev took an important step towards erasing a terrible stain on Russia’s history. This admission can be seen as part of a bigger de-Stalinization program, which, if carried out transparently and objectively, will have deep political, historical and psychological implications.

Stalin’s crimes were routinely attributed to the power struggles in the Bolshevik leadership during Lenin’s illness and after his death, which contributed to the formation of Stalin’s authoritarian excesses, including his personality cult. But Stalinism’s violence has deep roots in Russian history, reaching  all the way back to the time of Ivan the Terrible. Sociologists and historians of Stalinism assert that Ivan IV and Adolf Hitler were two politicians Stalin considered role models. Vast documentation proving Stalin’s admiration for Hitler already exists; as for Ivan, Stalin encouraged writers, filmmakers and historians to rehabilitate this historical figure in the eyes of their contemporaries.

The Stalin-era secret police—the NKVD and later the KGB—very much mirrored Ivan’s special guards, the notorious opríchnina, who were responsible for spying on citizens and quashing any attempt at rebellion. The opríchnina were under the command of Malyuta Skuratov, one of the few men who enjoyed Ivan’s complete trust. At the end of 1569, Ivan came to believe that the people of Novgorod wanted to place themselves under the authority of the Polish-Lithuanian Commonwealth. Ivan decided to make an example of the rebellious population and sent Skuratov and the oprichnina to carry out his wishes. From Jan. 6 to Feb. 13, 1570, the oprichnina threw thousands of people into the freezing water of the Volkhov river. Stalin considered Skuratov to be a great military leader and praised the opríchnina’s role and methods.

In addition to their acts of cruelty, the opríchnina encouraged Russians to denounce their fellow citizens and fueled a culture of suspicion and hostility. The same can be said of Stalin and his regime. The Molotov-Ribbentrop Pact allowed Stalin to annex part of Poland. Being suspicious of everyone to the point of paranoia, Stalin could not accept the thought of a body of Polish officers potentially capable of thinking differently from him, and even of rejecting his ideas. Stalin therefore decided to be one step ahead and eliminate them all. He was a modern-day Ivan the Terrible. Therefore, the Katyn massacre has ramifications both in the Novgorod episode, and in Russian history as a whole.

Medvedev’s challenge is daunting. De-Stalinizing Russia requires creating a new way of thinking, eliminating the psychological tendency common in Soviet Russia to glorify an individual’s role in history and to wait for this one individual to have all the answers. If he relies on democratic procedures, including allowing and encouraging an independent and free press, Medvedev certainly will contribute to releasing Russian society from the iron fist of authoritarianism deeply rooted in the country’s history and culture. Medvedev will help create something that Russia has never known before: a real civil society.

No matter what the future holds for Medvedev, his actions thus far have shown that conversations about changing the political system are no longer taboo. He has also set an example others might follow by expressing a difference of opinion from Putin, demonstrating that dissent and discourse is possible in Russian politics. Medvedev has also voiced support for all parties to have a role in the political process, no matter their number of supporters. Such is the democracy being promoted, and if it continues to grow and be reinforced, Russia may finally be able to settle the score with its authoritarian history.