Bringing sanity to a mad world 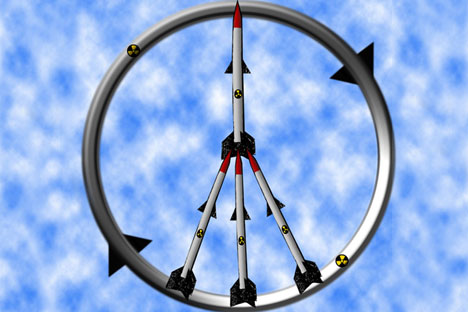 When President Dmitry Medvedev warned in his latest state-of-the-nation address that a new arms race could begin in the next decade, the hall erupted in applause. No wonder. For many of the Russian senators in the audience, that term calls to mind their younger years, something pleasant in and of itself. Added to which many people on both sides of the Atlantic, it seems, sorely miss those “good old days” when everything was clear: two worlds, two systems, and explicit rules of the game.

One finds oneself thinking of the advantages of a systemic confrontation, given the political and legal free-for-all into which the planet has been sinking ever since.

But reminiscences aside, what did the president mean? And we should consider that Prime Minister Vladimir Putin also said in his recent interview with Larry King that an arms race would lead not only to the failure of the anti-missile defence shield but also to the non-ratification of Start II. The latter is doubtful: that agreement is not of such calibre. But as for the anti-missile defences, Moscow’s logic is understandable.

The question remains: can Russia and the US break the vicious circle of mutual nuclear containment, or will this type of relationship, frankly absurd today, be preserved in future?

Whatever Moscow and Washington do, the material and technological basis of their relations remains not simply restraint, but mutually assured destruction. Another use for the vast arsenals they amassed up to the late Eighties simply does not exist. No international problem requires such a quantity of nuclear charges and missiles. The political logic of that period has long since lost its force; the whole world has changed. But you can’t argue with weapons: the logic of arsenals still dictates, no matter how often Russia and the United States reiterate that they no longer see each other as adversaries.

A quick liquidation of stockpiles will not be achieved. First of all, strategic nuclear forces are mainly political weapons and a matter of status. No one will simply give these up. This is especially true of Russia, which no longer has any other features of a superpower. And, judging by discussions underway in Washington, idealists there are being squeezed on all sides, too.

Second, one needs at the very least a qualitatively different level of trust between Russia and the United States; the first shoots that appeared during the “reset” may very soon be trampled.

And finally, the time when these two giants set the tone in the nuclear sphere has long since past. Proliferation goes on, quietly. China’s nuclear arsenal, though only a fraction of Russia’s and America’s, is becoming an increasingly important factor in that country’s growing influence. Neither Washington nor Moscow can allow the other to be in the same “league” with Beijing because then the counterweights to its influence would be even less.

Nevertheless, the needlessness of assured destruction is obvious, and this situation must be somehow overcome. The only way is a gradual rapprochement in the strategic sphere which will make the nuclear containment of Russia and the United States an anachronism. And for this, joint work on anti-missile defences would be ideal. If this is undertaken in earnest, sooner or later it will become apparent that missiles aimed at each other are patently absurd given that the “adversaries” are building a joint shield. This is a long, hard road, the success of which, though not guaranteed, is none the less possible. Especially when one realises the real threats facing both countries in the 21st century.

On the other hand, it’s obvious what will happen if, in the sphere of anti-missile defence, nothing comes together and they each go their own way. In that case, the old type of relations will inevitably recur since that same nuclear rubicon will be preserved. An American missile defence system would be built against any other country possessing missile potential, including, of course, Russia – even if Russia were not the main object. Moscow would then automatically begin searching for ways of overcoming that anti-missile shield.

No one will abolish mutual nuclear deterrence as the basis of balance so long as the two nuclear superpowers are not engaged in a common cause. All of this goes beyond the bounds of rational argument, but the burden of arsenals aimed at one another will continue to return us to the confrontation of 30 years ago, even if in a farcical form.

One must not forget that all this is a game of nerves. These gigantic arsenals are inapplicable; the anti-missile system is virtual since most likely it will never be created. The paradox is that the political effect of the idea of an anti-missile shield is more than real since it touches the heart of the problem of strategic stability.

To imagine an arms race of the classic kind that existed in the latter half of the 20th century is impossible. The entire developed world is too concerned with budget deficits and national debt: in reality these problems represent a far greater threat to stability than do any classic threats. True, in that situation nuclear weapons regain the significance they seemed to be losing. Meanwhile, Nato’s just-published strategic conception clearly states that nuclear weapons, primarily American, are that alliance’s supreme guarantee of security. So say goodbye to a non-nuclear world. And in the United States, where only recently there was talk of investing in hi-tech conventional weapons of a new generation, cost estimates now show that preserving the nuclear component would be cheaper.

Be that as it may, anti-missile defence represents a fork in the road: one way leads to a new system of relations between Russia and the United States, with both sides ceasing to view the other as a strategic threat; the other leads back to a model of the Cold War – albeit a wittingly senseless one.

Fyodor Lukyanov is the editor-in-chief of Russia in Global Politics magazine.