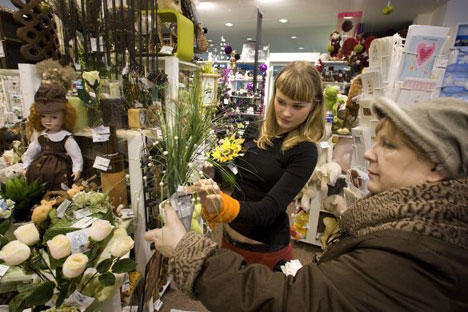 A holiday shopper picking out holiday gifts in a Moscow boutique. Russian companies are increasingly eschewing such gifts for their employees in favor of charitable donations.Photo by Vladimir Filonov / MT

New Year's is a traditional time of gift giving, but this year, at least 382 Russian companies will be making donations to charity instead of distributing the usual branded calendars, pens and vintage wines.

“It's great that we are doing something useful for Russia instead of supporting the Chinese economy and its plastic rabbits,” said one chief executive, who preferred not to be identified.

The “charity instead of business gifts” worldwide initiative was launched by Britain-based Charities Aid Foundation in 2005. In Russia, the scheme has since raised more than 217 million rubles ($7 million) for worthy causes.

Among the big companies involved in the initiative are PricewaterhouseCoopers, Troika Dialog, Alfa Bank, Renova Group and Interfax Group.

“Instead of random gifts, clients and colleagues receive a card or souvenir made by charity,” said Yekaterina Shapochka, the program's coordinator at PwC.

Some companies do not distribute New Year's gifts at all. A spokesman for LUKoil's Moscow office said that for them, “the concept of presents” does not exist.

“There are no bouquets and no bottles — we just don't do it,” he said. But he admitted that the company does arrange festive theater trips for its staff.

Nevertheless, charity donations or frugality on the part of companies remain the exception rather than the rule.

Among the gift-givers this year is state oil giant Rosneft, which has two tiers of presents, one for senior managers and clients, and the other for junior clients, staff and members of the media.

A Rosneft spokesman declined to say what the top-shelf gifts would be, but those falling into the less distinguished bracket are in line for a range of company-branded material, he said. This includes the usual calendars, notepads and diaries as well as oil-drop-shaped glass paperweights containing Rosneft crude or glass baubles featuring tiny Santa Clauses leaning against oil rigs.

A spokesman for UralSib said the company distributes calendars every year but chose porcelain pieces, produced by a partner firm, as additional gifts in 2010.

Some organizations look to imbue their Christmas gifts with elaborate meaning, though it might often be opaque for those on the receiving end.

“Our customers and partners are getting a bottle of organic wine made with grapes from a nature reserve and juniper pillows with healing properties," said SkyLink general director Gulnara Khasyanova. "Each employee of SkyLink gets a pot with a rare type of honey collected during the flowering of maple trees, and black tea with thyme.”

This is a part of “the movement to promote safety in mobile telecommunications," she said. "We decided this year to 'go green' with our New Year's presents."

Diplomats also hand out presents, though those on the German Embassy's gift list this year may have been a little baffled by Teutonic Christmas cheer.

In addition to a self-explanatory bottle of champagne, the present included a large blue bucket with the phrase “Germany without traffic jams.”

But he did not elaborate on why the writing on the bucket was the wrong way up — so that you have to turn it upside-down to read it.

Protestors use upside-down blue buckets attached to cars — and themselves — as a parody of the detachable blue sirens known as “migalki.” The flashing lights give cars priority on the road and are used by Russian officials to flout traffic laws.

The bucket is actually a wine cooler, Richter said. “You are supposed to use it for the champagne.”

But he did admit that the present was “open to interpretation.” In past years, the embassy had sent out mainly German “Lebkuchens,” a traditional gingerbread, as gifts, Richter added.

Befriending the French Embassy might be a better bet. Spokesman Thomas Buffin said they usually send out “beautiful French books” or “small bottles of cognac, armagnac or calvados” as Christmas gifts.

Natalya Grishina, a spokeswoman for the U.S. Embassy, was reluctant to speak about presents for Russian associates. “Isn't that a private thing?” she said.