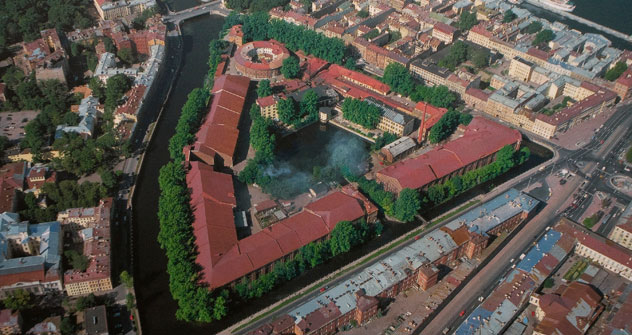 Billionaire Roman Abramovich has plans to develop an island in St Petersburg, which should make his girlfriend happy.

Though he is more readily associated with oil and football, Mr Abramovich is now preparing to complete a major project which frustrated British architect Lord Foster.

But it is the billionaire’s intention to site a branch of Moscow’s Centre of Contemporary Art on the island that has set tongues wagging.

Roman Abramovich intends to build a multi-purpose complex on New Holland that will cost £256m.

He will run the island for seven years. Thereafter, the island’s communications, two new bridges connecting to it, as well as 1,500 square yards of exhibition space, will become the property of the city. Everything else will stay with the investor.

Because its main premises, the modern art centre Garage, was founded and is directed by Daria (Dasha) Zhukova, Mr Abramovich’s 29-year-old partner, who appears to have guided her man through his recent evolution as something of an art buff, or at least a collector to be reckoned with.

The couple are known for opening cultural centres and galleries in Moscow, throwing exclusive parties with guests such as singer Amy Winehouse, and acquiring astronomically expensive paintings by contemporary masters at New York auctions. Mr Abramovich has now established himself as one of the world’s top 10 art collectors, according to ARTnews .

And now he is branching out yet again, spawning such recent headlines in the Russian press as: “Abramovich to invest 12bn in contemporary art museum in New Holland”, referring to the 18th-century architectural enclave to be found among the majestic canals of St Petersburg.

City authorities have been trying to decide the fate of the historic site since 2006, when Lord Foster’s project was cancelled and a replacement had to be found. Cue Roman. Last month a tender was won by New Holland Development, a division of his Millhouse Capital UK Ltd.

On hearing the news, the billionaire and Ms Zhukova discussed with St Petersburg governor Valentina Matvienko the seven- to eight-year project. Soon after that meeting, the couple left on their yacht.

While the couple were away, people in St Petersburg began speculating on their presence in New Holland. Recalling some of the billionaire’s previous presents to Dasha – Lucian Freud’s Benefits Supervisor Sleeping cost more than £17m, Alberto Giacometti’s Woman of Venice (more than £7.5m), and a £1.5m penthouse in west London while he builds them a £150m house behind Harrods – it was even speculated that he was investing so much in the project with its modern art components to top the list of previous gifts for his partner.

Asked if Mr Abramovich wasn’t investing in New Holland because he wanted to give another present to Dasha, his press secretary John Mann laughed in reply: “The Garage Centre of Contemporary Art has already announced that it will have a branch in St Petersburg. That’s not the main thing that will be on New Holland Island, though people are making a lot of it. It will be a multi-purpose complex including retail, commercial space, apartments, parking, a hotel and, only then, areas for the cultural projects about which there has been so much discussion.”

However you look at it, this is a huge task. Mr Abramovich is reportedly the 50th investor to want to renovate the towering galleries, vaults and arches of New Holland. Formerly owned by the Admiralty and housing tsarist fleet sailors, the site is a forbidding, derelict spectacle today that some believed to be cursed after one project after another came unstuck, and a deputy governor tasked with the scheme died in a train crash.

Veteran St Petersburg architect Veniamin Fabritsky warns that structural challenges are likely to push up current estimated cost more than threefold, as happened with Lord Foster’s initial $300m (£192.7m) plan. But if anyone can pull it off, popular wisdom says it’s Roman Abramovich. As well as a modern art museum, “hotels, boutiques and other contemporary facets of globalisation would fit in here perfectly well”, Mr Fabritsky told Ogoniok magazine recently. “Maybe we should have faith in Abramovich.”

All the plans will have to be approved by the St Petersburg government, Mr Mann stressed: “Everything will correspond to the island’s original design, so I think that there should be no problems with public opinion. We want this to be good for the city and good for people.”

Quite where Dasha’s frenetic interests in design, fashion and publishing might lead the spending spree is anyone’s guess. But, for sure, the union and its joining together of big money and a love of art is likely to leave many more dazzling spin-offs in its glittering wake.

Is this an investor’s boon or burden?

An artificial island built in 1721 by Peter the Great as Russia’s first military port, New Holland has always been a symbol of St Petersburg, especially because of its majestic 23-metre arch designed by the French architect Jean-Baptiste Vallin de la Mothe. From that arch, vessels could slip along canals to the Neva river, and from there to the Gulf of Finland and the Baltic Sea.

In the 1730s, warehouses were built for the drying and storing of timber for building ships. More recently, those warehouses belonged to the Leningrad Military and Sea Base. Off-limits to the public in Soviet times, the territory was handed over to the city of St Petersburg only in 2004.

For years, New Holland Island was a stumbling block between the public and the authorities, and the rapid deterioration of this protected architectural ensemble only exacerbated the situation.