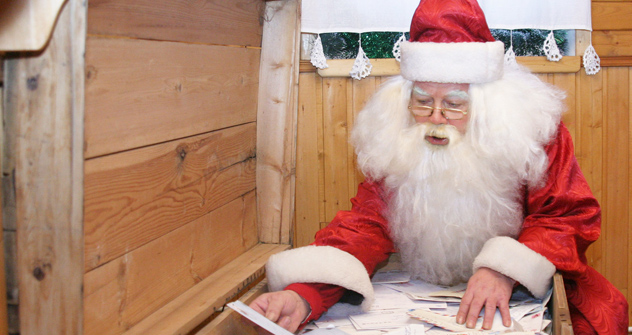 Really, the only exciting thing that happened was that Russian President Dmitry Medvedev said he wants to change the name of the militsiya to politsiya (yawn) - oh, and now we are allowed to have parties with the gays on Triumph Square, which is something I guess.

Still, without wanting to appear greedy, below is a short list of simple things we would like to get in 2011 that we think will make a big difference to living and working in Russia at almost no effort or cost. Do you think you could see your way to sorting them out with Tweedledum and Tweedledee in the Kremlin? I am sure they will listen to you, (as they seem to have a bit of problem listening to anyone else).

Paint yellow grids over every junction in the city and then ban any driver that stops in the box for six months (use cameras at junctions to police this rather than the ravenous GAIshniki). At a stroke, you would double the flow of traffic.

Get rid of the law that demands cars that hit each other have to stand where they are until the police come (at least 30 minutes), which only causes huge jams behind them.

Increase the fine for having your car towed away from RUB100 to $100. And ban parking on the pavement (again, but this time make it stick).

Ban police from drinking beer while they driving their police cars. It looks bad.

Unilaterally drop the visa requirement for EU and US citizens entering Russia. Or at the very least allow them to get a visa at the border. If you want foreign investment, the first thing you need to do is let investors into the country. Don't wait for the EU to reciprocally drop visa requirements for Russians, as this will take a decade to organise.

Oh yes, while you're at it, put up those little poles with straps between them in the arrival hall at Domodedovo and Sheremetyevo so there is a proper queue to passport control.

Poor management skills is the biggest drag on Russia's productivity, according to several studies. So instead of wasting $3bn on setting up Skolkovo that won't really function properly for another 10 years (if the Dean Wilfried Vanhonacker's track record is anything to go by), set up a fund of say $100m and pay for 2,000 young Russian managers to take MBAs in France, UK and US every year.

There are about 50,000 significant companies in Russia and in five years you could create an army of well-trained managers. You can even make the scheme self-financing if you force the students to repay the money after their studies end.

Act now. Pensions and social spending already account for a quarter of the budget deficit and this is only going to get worse. What is so hard? You can take anyone one of the three Baltic state's systems (all successful, but all three taken slightly different models) and just adopt it wholesale.

Close all the shell companies that were set up in the last attempt and do nothing. Make pension investments into legitimate funds tax-free. The programme to make Moscow an International Financial Centre will fail unless pension reform is successfully implemented. Make Sberbank set up western-style mutual funds.

And while you are thinking about social issues, change the constitution to fix the amount of budget spending on education at something high like 4-8% of GDP, like the Taiwanese did.

• Do a Georgia on red tape

Take a deep breath. Swallow your pride. And get Kakha Bendukidze to come back to Russia from Georgia to cut red tape. Bendukidze, who made his first fortune as a Russian industrialist, was given the power to slash the bureaucracy and chuck out stupid rules in Georgia's legislation and has made the tiny Caucasus republic the easiest place to do business in the CIS.

If Bendukidze is a bridge too far, then get someone else to this job - preferably someone Finnish, like Ilkka Salonen, former deputy chairman of Sberbank.

Talk, talk, talk and no action on setting up a central securities depository. Everyone wants this and with T+3 settlement (trade plus three days), it would at a stroke greatly reduce the cost of trading and so the cost of capital. It is only a question of will and this reform will materially make everyone's life easier and cheaper.