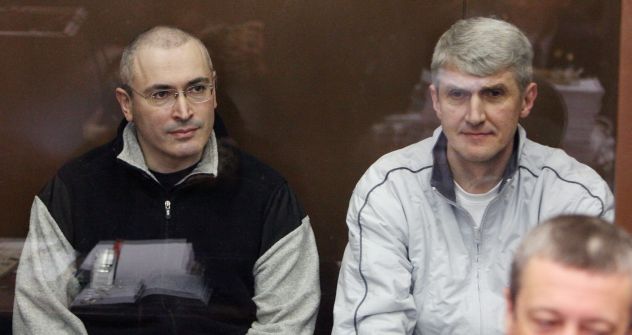 Former Yukos head Mikhail Khodorkovsky and his partner Platon Lebedev have been found guilty of organizing a criminal group in the oil business, embezzling 218 million tons of oil from Yukos’ subsidiary companies and money laundering.

No more charges can be brought against them over this case.

The reading of the verdict started at about 11am Moscow time (8am GMT) at the capital's Khamovnichesky court. Judge Viktor Danilkin has  announced that the men have been found guilty of registering off-shore companies “to facilitate the criminal business”.

As for Yukos' oil extraction subsidiaries, Ugansneftegaz and Samaraneftegaz, the judge said they were initially put in “economically unfavorable conditions”, in which they had no opportunity to run their own business activities.

Money-laundering from oil misappropriation was carried out through “complicated contracts abroad and on the domestic market”.

In an attempt to hide the misappropriation, Khodorkovsky, Lebedev and other members of the criminal group made fake purchase and sales deals through front companies.

Platon Lebedev has been found guilty of organizing financial transactions in the affair.

Khodorkovsky’s lawyer Karina Moskalenko has said the defense will appeal the guilty verdict.

She also said that given the crimes the defendants have been found guilty of, the prison term is likely to be quite long.

There is no live broadcast in a special room for journalists, it is only possible to listen to the verdict in the court room, which does not have enough seats for all those wanting to witness the event.

“The fact that the broadcast was stopped at the beginning of the reading is a very meaningful symptom for justice,”Karina Moskalenko told journalists.

“Even if hearings are held behind closed doors, the reading of the verdict should be public. Otherwise, this places the judge out of the public control,” she added.

Also, after a 15-minute break in the middle of the reading, even those journalists that were in the court room at the beginning, were not allowed in again.

Mikhail Khodorkovsky’s wife Inna has been removed from the court room. Interfax has reported that ushers demanded she leave as she was talking during the reading of the verdict.

Police have detained at least 22 activists who rallied outside Khamovnichesky court for refusal to wrap  up banners they brought with them.

Officers reportedly resorted to using force to detain the protesters. The activists were shouting “down with the police state”.

On December 15, the reading of the verdict in the second criminal case against Khodorkovsky and Lebedev was postponed until the end of month. Both businessmen are serving their first eight-year prison term after they were found guilty in 2005 of fraud and tax evasion.

Khodorkovsky, the former Yukos company head, was Russia’s richest man before he was arrested in 2003. Prosecutors are now demanding 14 years in prison for him and his business partner Lebedev in the second criminal case – to be backdated to include the eight years served. During the second trial that has lasted 19 months, prosecutors accused Khodorkovsky and Lebedev of embezzling 218 million tons of oil from Yukos’ subsidiary companies.

Khodorkovsky said his actions were legal. He claimed that the prosecution has not managed to prove their position. The businessmen have always insisted on their innocence. Last month Khodorkovsky said before the court, “My principles are worth my life.”

Prosecutors said the charges against both defendants “have been substantiated.” They also claim they had asked for“a lesser punishment for the defendants” in accordance with new amendments regarding economic crimes.