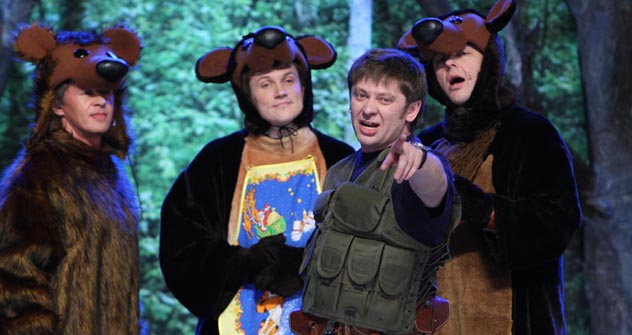 'Merry and Quick-Witted' show will celebrate 50 years in 2011; Putin even laughed at jokes aimed at him.

Dmitry Medvedev’s rise to the presidency was, in a word, unexpected. But as it became public that Russia’s Deputy Prime Minister would be Putin’s likely successor, a team from Moscow State University performed a skit on television, with Medvedev in the front row, roaring with laughter. The students portrayed Medvedev’s fictional high school reunion. His former classmates fawned over the president-to-be, asking if he remembered them and laughing uproariously at his lame jokes. A clueless former classmate arrives, boasting: “I’ve been in the woods for the past five years – no TV, no radio…nothing!” Oblivious to Medvedev’s fame, the guy smacks him on the back and says “What’s up, Dima?” When they pose for a class photo, the unknowing hero gives the future president bunny ears. Tell this story to any Russian, and he’ll respond, “only on KVN”.

The KVN is as recognisable a Soviet brand as the Bolshoi Ballet or astronaut Yuri Gagarin’s smile. When it debuted on national television in the 1960s, KVN, or Klub Vesyolykhi Nakhodchivykh (The Club of the Merry and Quick-Witted), was the only legal form of unorthodox thought. Today, this humorous survivor from the Soviet civilisation is a one-of-a-kind show, an original creation that wasn't borrowed from the West.

The games and skits between teams of college students is played out in front of a live studio audience. At first, it consisted of competitions involving general knowledge, but it evolved into contests of wits that favoured the player who made the smartest joke. The key to the show became improvisation, jokes and put-ons.

It began in its first incarnation in 1956. Like a bolt from the blue, Khrushchev delivered his secret speech denouncing Stalin at the 20th Congress of the Communist Party. His unmasking of the personality cult was like a breath of fresh air — and freedom. Next year, Moscow hosted the World Youth Festival. The Soviet intelligentsia was brimming with hope, creative projects and brilliant ideas. It was then, during the so-called “Thaw”, that producers came up with the idea of “enlivening” Soviet television, still largely controlled by the ruling regime.

The message was completely new for Soviet TV: the participants included not only the hosts, but also members of the audience. Filmed live, they took part in various contests. The show helped to demonstrate that after decades of being stifled in the name of the party and state, every person could be interesting on his own and, more significantly, have his own opinion. This was a fantastic breakthrough, a revolution of sorts.

In the beginning, the show was not yet KVN, but VVV — or Vecher Vesyolykh Voprosov (An Evening of Merry Questions). After only its third show, VVV was taken off the air by the Soviet authorities in the wake of an “incident”. VVV had decided to award a prize at the next taping to any audience member who arrived at the studio dressed in a fur coat, hat and felt boots (it was then the middle of summer) and carrying a newspaper dated December 31 of the previous year. Unfortunately, when the show’s host announced the conditions, he forgot to mention the newspaper. When the next show was scheduled,the studio was stampeded by hundreds of people in fur coats and felt boots. Chaos ensued. The show was yanked. All evening, televisions tuned to VVV showed the message: INTERRUPTED FOR TECHNICAL REASONS.

This interruption lasted four years until KVN was reborn in 1961. It was originally filmed in black-and-white and became hugely popular overnight, eventually becoming the longest-running show on both Soviet and Russian TV. KVN soon became a social movement. Copy-cat “KVNchiks” were put on at universities, factories, schools and pioneer camps. KVN went around the country auditioning teams, the best of which wound up on television.

Since the teams often made ironic remarks about Soviet reality and ideology (those were the jokes the audience liked best), the show was soon no longer live, but taped. And ideologically dubious humour was often edited out.

In the old days, KVN had been a sort of valve through which — along with laughter — the steam of social tension was released. The media atmosphere in Russia has since changed, and KVN has become one of many comedy sketches. Putin even appeared on the show several years ago to congratulate the team on its 45th anniversary. However, it is still one of the few places — perhaps the only one — that has brought former president Vladimir Putin to laugh at a satirical dig aimed at him.

The related story: They have their own Santa-Banta jokes