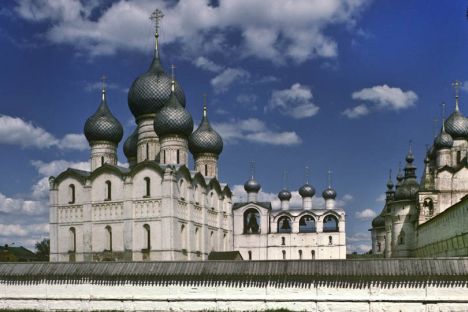 Although Rostov Veliky has yet to find its footing as a tourist destination, it remains a wonderfully preserved example of medieval Russian architecture.

The highway from Moscow to Yaroslavl still passes through groves of birch, pine, fir, and aspen that convey not only the beauty of the landscape but also thoughts of the rich history that unfolded in this part of Russia. Along this ancient path, which passes through the medieval towns of Sergiev Posad and Pereslavl-Zalessky, there is no sight more imposing than the towers and cupolas of Rostov Veliky, Rostov the Great.

At the southern approach to this small city (population approx. 31,000), a road splits off to the right through a grassy marsh on the fringes of Lake Nero.  In the distance gleam the restored cupolas of the Savior-St. James (Spaso-Yakovlevsky) Monastery, situated on the shores of the lake.  From there, the road turns into quiet streets that lead to Rostov's main architectural ensemble, the majestic kremlin or, more properly, the Court of the Metropolitan.  Although most of the ensemble was not built until the 17th century, this citadel conveys an unforgettable sense of Rostov's importance for medieval Russia.

Rostov is one of the earliest historically attested towns in Russia, first mentioned under 862 in the ancient chronicle "Tale of Bygone Years."  Throughout the 10th century, Slavic settlers—primarily from the Novgorod lands—moved into this area, already sparsely inhabited by Finno-Ugric tribes. In 988, Prince Vladimir of Kiev, the Christianizer of Russia, gave the Rostov lands to one of his sons, Yaroslav, who subsequently became the Kievan prince known as "the Wise."  By the middle of the 11th century, the Rostov area had passed to Yaroslav's son Vsevolod, and Christian missionaries intensified their attempt to convert a still largely pagan population. The consolidation of church authority was symbolized in the mid 12th century by Prince Andrei Bogolyubsky's Cathedral of the Dormition of Mary, rebuilt by Prince Konstantin in 1213.

Although the Mongols captured and burned much of Rostov in 1237, the cathedral and monasteries remained. Rostov gained new significance as a center of church-supported culture during a time when so much else had been destroyed. In the 14th century, Rostov continued to be a center of religious learning and missionary activity, producing such pioneers as St. Stephan of Perm and Epiphanius the Wise. The most impressive example of Rostov’s religious heritage is the Cathedral of the Dormition of Mary, created in brick on the site of two earlier limestone versions. The rebuilding of the Rostov Cathedral, perhaps begun in the reign of Ivan III and continued by Vasily III and Ivan the Terrible in the 16th century, was an event of much significance, a demonstration of Moscow's dominant political position in Russia as well as its determination to enhance the ancient centers of Russian religious culture. The cathedral’s wall paintings, damaged during the Soviet period, have undergone extensive restoration. Fortunately, the frescoes of the surrounding churches were relatively well preserved.

In 1609 Rostov was sacked by Polish forces during the dynastic crisis known as the Time of Troubles. In the second half of the 17th century, this quiet town would witness another transformation, set in motion by an ambitious, dynamic church leader, Jonah Sysoevich (ca. 1607-90). The son of a country priest, Jonah rose through the monastic structure in Rostov, and in 1652 was appointed Metropolitan of Rostov by the newly elected Patriarch Nikon. During this period, the Russian church embarked on the lavish building projects that would be the final expression of church power before the curtailing of its wealth by the state in the 18th century. Jonah had at his command 16,000 serfs as well as the best craftsmen of his large and prosperous diocese. Within 20 years—between 1670 and 1690—Jonah's builders erected not only several large churches and other buildings for the Metropolitan's Court and residence, but also magnificent walls with towers and gate churches situated on the north shore of Lake Nero.

The older Dormition Cathedral is linked visually to the Metropolitan’s Court by a great belfry (1682-87).  It is composed of two adjoining structures, of which the taller contains the largest of the bells—the 36-ton "Sysoy," named after Jonah's father.  The other segment of the belfry, with three bays, contains twelve bells with names such as "Swan" and "Ram." From the great belfry, the northern entrance to the citadel is marked by two domed towers and the Church of the Resurrection (1670), whose interior is covered in bright frescoes.

The Metropolitan’s Court centers on the Red Chambers (1672-80), used as the residence of the prelate. Near the Red Chambers is the Church of the Savior on the Stores, built in 1675 above a provisions cellar.  It served as the metropolitan's chapel for devotional purposes and for the performance of sacred music. The interior of the church was decorated with the richest of wall paintings in the entire kremlin. Beyond the palace on the west wall is the citadel's second major gate church, dedicated to St. John the Divine and flanked by large towers (1683).

After the death of Jonah in 1690, his work was continued by Metropolitan Josephat, who over the next decade commissioned a number of buildings, including the colorful Church of the Icon of the Mother of God Hodegetria, covered on the exterior with the diamond pattern imported to Muscovy by the Italians in the early 16th century.  After the death of Josephat in 1701, little else of note was built in the Rostov Kremlin. Skilled masons throughout Russia were being dragooned into the construction of St. Petersburg, founded in 1703. The Rostov ensemble had been conceived as a complete architectural environment, and further development would most likely have damaged the original vision.

In addition to the Archbishop's Court, Rostov has remnants of other churches and monasteries that formed an imposing silhouette. Near the kremlin is the Nativity Monastery, and about a kilometer to the east is the Monastery of St. Avramy, one of the oldest in Russia.  According to legend, it was founded in the late 11th century by Avramy, a fierce opponent of paganism.  In 1552, Ivan the Terrible took St. Avramy's monks with him in the victorious campaign against Kazan, after whose capture the monastery benefited from lavish gifts. In the 17th century, Jonah began his rise to power as abbot of this monastery.

To the west is the St. James (Yakovlev) Monastery, founded in the 14th century and enlarged by Jonah.  In 1709, the renowned Bishop Dmitry of Rostov, a strong supporter of Peter the Great, was buried here, and the monastery became a pilgrimage site patronized by prominent families such as the Sheremetevs, and by Emperor Alexander I. Most of its large churches were rebuilt in the early 19th century. Nearby is the beautiful Church of the Savior on the Sands, now restored.  It is the one remnant of a monastery founded in the 13th century by Princess Maria and merged with the St. James Monastery in 1764.

During the late 18th century Rostov's status diminished. During the reign of Catherine the Great, Rostov, like most other provincial towns, received a new, geometric city plan (1779). Rostov's decline became so severe, that the church considered razing many buildings in Jonah's kremlin and turning the rest into warehouses for the adjacent trading rows. Fortunately, one of the earliest preservation groups in Russia during the 19th century rallied to save the great works of art and architecture, and Rostov became a symbol of the conservation of Russia's medieval culture. Rostov also became famous for the delicate craftsmanship of its painted enamel icons and portraits, a tradition begun in the 18th century and maintained to this day. In 1953 a storm caused tremendous damage to the city, and destroyed most of the church cupolas.  Once again, restoration experts rallied and the kremlin was repaired under the supervision of Vladimir Banige, one of the leading specialists in the history of Rostov.

In 1970 Rostov was designated a historical preserve with the idea of turning it into a tourist destination such as Suzdal. Although the town center has an extensive 19th-century ensemble of houses and commercial buildings, the necessary tourist infrastructure has been slow to develop.  But the most important goal is the preservation of the city's unique monuments of art and architecture. With this priceless resource, Rostov will remain "the Great."