The Irony of Russian Fate, or Happy New Year! 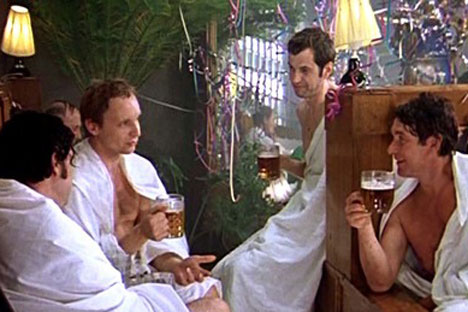 If you ask any Russian what was the good of perestroika, most would probably mention the opportunity to travel around the world and the long holiday break over New Year’s holiday. All the other supposed benefits—freedom of speech, democracy, or the chance to make a lot of money—have some drawbacks, but New Year’s vacation is an indisputably good thing.

You may be shocked to hear this, but during the Soviet era, there was no New Year’s holiday break at all. Dec. 31 was a regular workday, maybe cut short by a few hours, Jan. 1 was a day off and on Jan. 2, everyone happily went back to work. But then came perestroika, and the rest is history. First, Jan. 7, Christmas according to the Russian Orthodox calendar, became a public holiday; then the authorities put their heads together and decided that, since the gap between New Year’s and Christmas was pretty small anyway, why not close that gap with days off from work. The people were only too happy to oblige. It’s a miracle that they didn’t extend the holiday period to Jan. 13, New Year’s according to the Julian calendar used in Russia before the 1917 revolution. The Russians still celebrate it out of tradition as “Old New Year’s.” All told, every foreigner working with Russians should know that it is pointless to schedule any meetings during the entire month of January.

Of course, not everyone is happy. Some have called time and again for canceling the holiday break altogether, citing an assortment of scary facts. For example, many people run out of things to do and resort to drinking; or, husbands and wives grow so sick of each other that once the holidays are over, they run out to file for divorce rather than report to work. These deplorable facts may be grounded in reality, but the idea of abolishing the holidays has failed to attract many supporters. When backed into a corner, most Russians will admit to the real reason the holiday break must continue: Russians become so lazy during the winter break that making them work again would be all but impossible. The myth of Russian sloth is so entrenched that it deserves special attention, especially as it’s rooted in the popular embrace of celebrations. Russians indeed love their holidays, which they tend to celebrate in style, with lots of friends and a great feast. But are Russians really so lazy?  Could a nation full of do-nothings have been able to develop such a huge country stretching from St. Petersburg all the way to Siberia, filling it with cities and highways along the way? As a matter of fact, the difference between the European and Russian attitude toward work is the key. For a person from the West, especially one who grew up in a Protestant family, labor is above all a virtue, a way to earn honor and respect. For a Russian who is accustomed to toiling all year round in rather harsh climatic conditions, labour is not valor, but rather a necessity for survival.

What can distract a person from days of hard work better than a holiday? If given an opportunity to enjoy even the shortest possible break from work, a Russian will use it to the fullest. It would take another socialist revolution to make him pass on it.

But back to New Year’s. This holiday has a number of must-do rituals, such as drinking champagne when the Kremlin clock strikes midnight. This tradition goes back to the 1960s, when Russia started producing its own sparkling wine. At first, the unspoiled Soviet people perceived this as “la dolce vita.” But now everyone has grown accustomed to it and plays along, even if they would prefer a different type of drink at any other time of the year.

A more inexplicable New Year’s tradition also started in the Soviet Union: Watching the movie “The Irony of Fate, or Enjoy Your Bath!” on New Year’s Eve. If any foreigner would like to understand the “enigmatic Russian soul,” this film is a must-see. The plot is as follows: four friends go to a public bathhouse on New Year’s Eve; this is also a popular custom rooted in the washing away of all the problems of the passing year. At the bathhouse, the friends get absolutely plastered and mistakenly send the main character, Zhenya, on a plane to Leningrad (now St. Petersburg). The one-hour flight isn’t enough time for him to sober up, and as he exits the airport completely sloshed, he tells the cab driver his Moscow address. It so happens that the same street address exists in Leningrad. Not only that, the key also fits the lock, which is no wonder, given the Soviet Union’s so-called standardized housing, which meant that many housing blocks were literally identical to each other. Still drunk, Zhenya doesn’t realize he’s in someone else’s apartment, and goes to bed. Naturally, the real owner of the apartment, a pretty young woman, Nadya, shows up soon afterwards. Instead of calling the cops, she starts talking up the tipsy intruder. Then she takes pity on him, grows to like him, and lets him stay. And all the while she has a fiancé – a respectable, reliable man. At the end, Nadya, dumps her proper but dull husband-to-be and boards a flight to Moscow to be with Zhenya.

When an Italian friend of mine first saw this movie, his reaction was, “what a load of bull!” From a Western standpoint, it’s impossible to understand why you would substitute a drunkard for a teetotaler fiancé or destroy your already laid out plans in life for that matter. But the Russians prefer emotions to logic when it comes to guiding principles. And from an emotional point of view, Nadya preferred a sudden love with obscure implications to a predictable routine. Frankly, every Russian dreams of just that deep in their heart. Perhaps not necessarily of love, but of a miracle that would disrupt their habitual but so ordinary lives. Men dream of meeting a beautiful and understanding woman like Nadya on New Year’s Eve. Women dream of finding in their bed not a familiar and boring guy, but a charming Zhenya, even though he might be drunk at first. That’s why the Russians seldom plan far ahead. Westerners working in Russia call it unpredictability and get very irritated. But all Russians do is leave room for a chance to strike, or for fate to do its magic.

So I raise my New Year’s toast to the irony of fate, thanks to which all happy changes in our lives occur! As the popular saying goes, “All’s for the best in the best of all possible worlds.” We just may not understand it at first.