A rally to bring people closer together 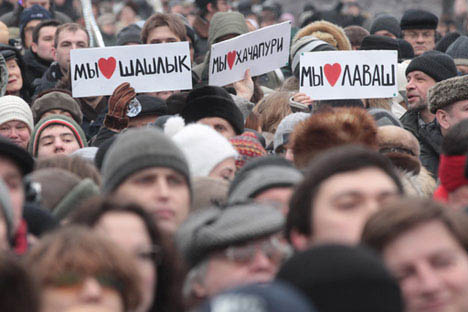 At a recent meeting to confront the nationalist riots in Russia, speakers asked participants to appeal to reason and focus on improving the country for everyone.

Moscow’s Pushkin Square is not very big. On Dec. 26, it could accommodate only about 2,000, who showed up to denounce the recent nationalist riots by soccer fans. Icy rain had hit the day before, turning frost on the trees into a thick crust of ice so heavy that it bent and broke the branches. The ground was covered with slippery slush, in which young people stood shoulder to shoulder with older ones, and it was evident that, despite many differences and perhaps opposing political views, they had decided to stand united that day.

Indeed, the rally was not political at all. There were no slogans in the“Down with the president, down with the government” vein. Instead, some respected and popular people spoke almost intimately about what was important to them: how to bring up children, what Russia means to them, their hopes and dreams for a better future, and why they believe it is their duty to fight against aggressive nationalism in Russia.

The rally was addressed by many intellectuals, including journalists, writers, film directors and actors, and also civil rights activists and politicians. They are all accomplished public speakers and their words were very dramatic and energizing. Yet what impressed me most were the words of Magomed Tolboev, the famous test pilot, Hero of Russia, a brave and dignified man, who is one of the very few people universally respected by everyone, no matter what their political affiliation. A native of Dagestan, he spoke in Russian with a heavy accent but also with the utmost sincerity. He said that he had taken a military oath of allegiance to Russia, and that Russia is for all those who love her and work for her. I know some people who skipped the rally because they do not subscribe to its Russia for Everybody headline message—yet they are all for theRussia for Everybody Who Loves Her slogan. Many others could identify with that, too.

In fact, the trump card played by the nationalists is to blame all troubles on one ethnic group or other. Yet, if we look closer, no ethnic community is really homogenous; the majority consist of ordinary citizens who want to live and work in peace rather than those who try to impose their own ways. I thought about this recently as I watched the excellent movieAmerican History X by Tony Kaye, which deals with racism in the United States. During a breathtaking scene in which white and black teams play basketball against each other, I suddenly realized I was rooting for the white team! This is just a sport; everything is almost innocent and even beautiful. But when this beauty turns into a disgusting rampage through a store and humiliation of defenseless people, it becomes abundantly clear that the white thugs are the true criminals here, rather than the Latino shop assistants.

For this to become clear in real life, sometimes you need a rally—especially one that does not urge the participants to rise up and attack their opponents, but that brings to light their strongest delusions, which we nonetheless have to defeat. Igor Vinogradov, the 80-year old editor of the magazine Kontinent, said what needed to be said: You cannot shut out some of the people, however deluded they might be, by pretending that they just do not exist, and that the intelligentsia must educate those who are not so developed intellectually. His words reminded me of the famous Russian poet Alexander Blok. Soon after the 1917 Russian Revolution, in a speech entitled The Intelligentsia and the Revolution, he called on Russian intellectuals to become more active. He said: “Arrogant politicking is a great sin. The longer the intelligentsia continues in its acrimonious one-upmanship, the scarier and bloodier everything around us will become.”

There was no “arrogant politicking” at Pushkin Square last Sunday. Talking to people in the crowd, Vladimir Ryzhkov, a leader of the democratic movement, promised that the proverbial quarrels within the ranks of the Russian democrats would subside. I hope this is true. What Russia needs right now is for all healthy forces to be united.