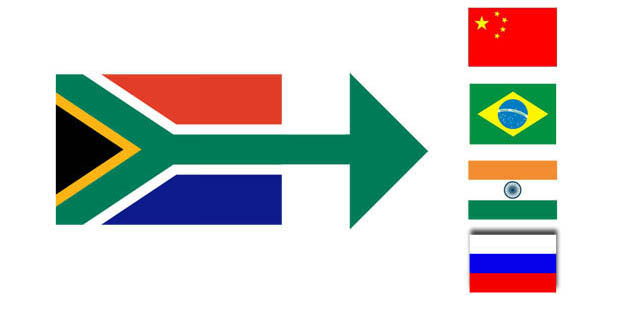 Chinese President Hu Jintao wrote a letter to his South African counterpart, Jacob Zuma, to inform him of the decision and inviting him to the BRIC's third heads of state meeting in Beijing next year, Chinese Foreign Minister Yang Jiechi said in a statement on his ministry's web site Friday.

South Africa, which has a population of 49 million compared with China's 1.36 billion, is betting on raising its clout on the world stage by joining BRIC, while strengthening political and trade ties within the bloc. The country accounts for about a third of gross domestic product in sub-Saharan Africa and will offer BRIC members improved access to 1 billion consumers on the continent and mineral resources including oil and platinum.

Joining the group is "the best Christmas present ever," South Africa's Minister of International Relations and Cooperation Maite Nkoana-Mashabane told reporters in Pretoria. "We will be a good gateway for the BRIC countries. While we may have a small population, we don't just speak for South Africa, we speak for Africa as a whole."

Zuma has made state visits to all of the BRIC nations since coming to power in May 2009 and the government has "lobbied very hard" to be included in the group, which will now be known as BRICS, Nkoana-Mashabane said.

Africa's biggest economy is a "powerful country," even though it's small compared with the other BRIC nations, Alexei Vasiliev, President Dmitry Medvedev's envoy to Africa, said Dec. 22.

South Africa has an economy of $286 billion, which is less than a quarter of that of Russia, the smallest of the BRIC nations. Its population is also dwarfed by India's 1.2 billion, Brazil's 191 million and Russia's 142 million.

Goldman Sachs Group economist Jim O'Neill coined the BRIC term in 2001 to describe the four nations that he estimates will collectively equal the U.S. in economic size by 2020.

"South Africa's economy is very small," O'Neill, who is now chairman of Goldman Sachs Asset Management International, said in an interview from London. "For South Africa to be treated as part of BRIC doesn't make any sense to me. But South Africa as a representative of the African continent is a different story."

At their first summit in Russia in June last year, the BRIC heads of state called for emerging economies to have a greater voice in international financial institutions and for a more diversified global monetary system.

"South Africa as a country is small, but if we go there as a regional market, that's a different story," said Martyn Davies, chief executive of Johannesburg-based Frontier Advisory, which provides research and corporate finance services on emerging markets. "For South Africa, it's nice to be associated with the big boys."

South Africa is the only African nation represented in the Group of 20, and will take up a two-year seat on the United Nations Security Council along with India and Brazil next year, resulting in all BRIC nations being represented on the council. The African nation is also part of a trilateral group with India and Brazil, known as IBSA, created in 2003 to coordinate action between the three emerging economies in global forums.

"We bring the most diversified and most advanced economy on the continent," said Nkoana-Mashabane. "We may not be the same size, but we can open up opportunities for them and through that, we can complete our economic integration on the continent.