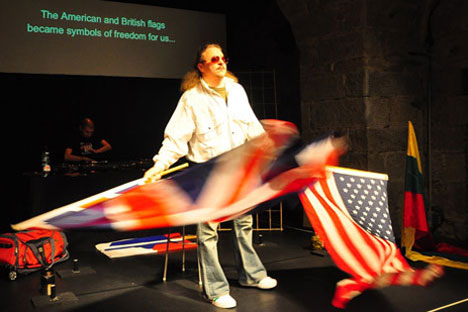 In recent days, the activist thespians of Belarus Free Theater went underground after one of their founders was arrested in Minsk, which became a hotbed of protest after the presidential election. It looked like the group would not make it to New York for its highly anticipated performance.

But Natalya Kolyada and Nikolai Khalezin, the founders of Belarus Free Theater, are quite often underestimated. The husband-and wife duo brought their troupe to New York Jan. 4, under the radar of the Belarus regime.

Kolyada, 37, and Khalezin, 46, tour the world, yet they have gone great lengths never to be apart: They wrote their highly acclaimed play, “Discover Love” together, winning The European Theater Prize. The two have only one cell phone between them.

If they are not together, it is quite possibly terrible news. Their painful separations have been when they were under arrest. Khalezin, a former journalist, spent two weeks in prison after participating in a march for freedom of speech in 1999. Two weeks ago, Kolyada was arrested for being a member of the post-election opposition protest in Minsk. Today, 22 opposition leaders are still imprisoned in Minsk.

The Belarus Free Theater performs this week during the Under the Radar Festival at La Mama theater in New York (Jan. 5 to 15). On the eve of their tour to the United States, Khalezin and Koliada were in Moscow and spoke to Anna Nemtsova, Moscow’s Newsweek correspondent, on special assignment for Russia Beyond The Headlines.

RBTH: The international media and human rights community followed the Belarus presidential elections and mass arrests. Tell us how the events in your own life became so closely involved with politics?

Nikolai Khalezin: For the past 16 years, life in Belarus has been pure political struggle. We have been together for ten out of these 16 years. So our love story occurs during the most dramatic time, a time when our friends were murdered or “disappeared”: Dima Zavadsky, a journalist; then Viktor Ganchar, the head of the election commission; Yuri Zakharenko, former minister of Interior Affairs, Anatoly Krasovsky--his wife is the godmother of our younger daughter and our best friend. Most recently, Oleg Bebenin, the leader of presidential candidate Andrei Sannikov’s headquarters, was found hung, dead…

That is the horrible background we live with. It might sound like just background for outsiders, but for us this is a part of life we live, life that permanently stays dark, as if in theatrical drama.

RBTH: Were you on the square during the last protest? What happened to you?

Natalya Kolyada: Kolya [Nikolai Khalezin] and I became separated. I found myself in a police bus. It was absolutely dark. The Omonovets (special police unit) used words that I could not quote here. He told all six of us to lie down on the floor. The softest word the police used for us was “animals”. So “animals” were lying on the floor, as the police bus continued to fill up with people until we were 70 people, like herrings in a barrel.

RBTH: Today Belarus Free Theater is probably as well known as the Belarusian President Alexander Lukashenko. (Former Secretary of State Condoleezza Rice called him “the Last Dictator.”) You have traveled all across Europe and the United States. Where do you perform at home?

Natalya Kolyada: At home we first performed at cafes, in private apartments and even in the woods. Until our friend let us play in his little private village house. That’s where we play and teach our day students alternative modern theater –the only contemporary theatrical education in Belarus.

RBTH: Why do you need to work in such conditions? Are the authorities scared of you?

RBTH: Is your theater a political theater?

Nikolai Khalezin: No, Free Theater  is not a political theater, we do not promote any political ideas. We are a post-dramatic theater that discusses acute problems. That is what makes the authorities lose their tempers. As soon as social issues are dealt with in the artistic sphere, they immediately attract massive attention. This happened with the most recent Russian play about the last moments of Sergei Magnitsky’s life–it became very popular.

RBTH: Why did your play, “Discover Love,”  garner so much international attention?

Natalya Kolyada: Those, who live life loving each other, have no idea how politics—which people avoid talking about, especially artists--can affect  their lives. So our play helps the audience understand that the “disappearance” of Anatoly Krasovsky, and the plight of his wife Irina could happen anywhere, not just in Belarus. Similar tragedies happen all around the world. With that play we began a global campaign to support a United Nations Convention for the Protection of All Persons from Enforced Disappearance.

RBTH: Free Theater is not just a theater but also a campaign. How did you become so well known in such a short time?

Nikolai Khalezin: We need to go back to 2005, when we realized that the authorities would not let us work in Belarus and that, just as most writers and musicians, we would suffer from their oppression. So, we asked Vaclav Havel and Thomas Stoppard, two famous playwrights, for help. Havel was still Czech president, the other one was a Sir, Sir Stoppard… And they both agreed to support us. Tom introduced us to Harold Pinter, the Noble Prize winner, then we met Mick Jagger and Steven Spielberg – each of them tried to help our country.

RBTH: I know that support from the West caused some painful episodes for you at home. What happened when Mick Jagger spoke in support of the opposition?

Nikolai Khalezin: Ten days after we recorded Mick Jagger addressing (https://www.youtube.com/watch?v=NAuB7EwfE3g) our theater was arrested together with 60 people in our audience. We were all taken to police department by bus and kept in detention from 6 hours to 15 days. That was a special act to threaten us.

RBTH: Why does the world embrace your dramatic message?

Natalya Kolyada: I think because our plays discuss topics that concern us personally and we hope everybody else too. For six years we have been talking in our plays of our childhood and why we in Belarus have become what we are; why a child of an African man, or a gay person, or somebody who’s grown up in an orphanage gets beaten on a daily basis in Belarus – these are issues existing all over the world.

RBTH: What are the Free Theater’s plans?

Nikolai Khalezin: We are not going to change anything about our plans. We’ll perform, travel abroad, work and make noise in the artistic community. If the authorities believe that their business is to arrest us, our business is to perform. If the authorities want to play this game, it is up to them. We cannot guarantee that the arrests are not going to cause international sanctions for Belarus.