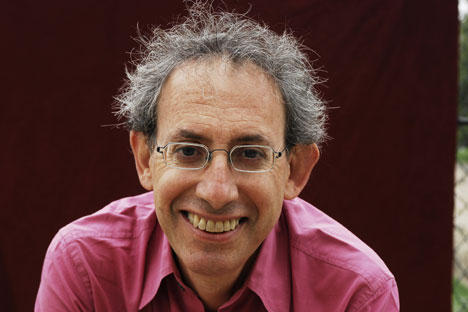 Author Ken Kalfus, who has set two of his works in Russia and lived in the country for four years, talks about the current state of Russian and American literature.

American author Ken Kalfus has a long-standing fascination with Russia. Two of four works of fiction are set in the country: "Pu-239 and Other Russian Fantasies" and a novel, "The Commissariat of Enlightenment." His short story "Pu-239" was adapted into a film in 2007. "Narkomat Prosvetleniye," a Russian translation by Tatiana Borokovaya, was published by Eksmo in 2006. Kalfus also wrote an introduction to the new recent American translation of Yuri Olesha's "Envy." He lived in Moscow from 1994 to 1998 and now lives in Philadelphia. Tatiana Shabaeva recently interviewed him for Rossiyskaya Gazeta.

Rossiyskaya Gazeta:What do people in the United States know about classical and modern Russian literature?

Ken Kalfus: A typical American reader will be likely to have read a greater number of 19th century authors from Russia than from any other country, including the U.S. Soviet-era authors are known less well, but Babel, Zamiatin, Pasternak and Solzhenitsyn are perennially in print. You may judge the wide interest in Russian letters by the wide acclaim received by a recent collection of essays on the subject, "The Possessed," by an American critic, Elif Batuman.

Post-Soviet writers are less well-known, but every year several of their books are published and receive critical attention. Vladimir Sorokin and Ludmilla Ulitskaya are among the writers I myself have reviewed recently for the New York Times; the Times frequently reviews new Russian authors, as does the New Yorker and the New York Review of Books.

Who promotes Russian literature in the United States? Why do people there come to know one or another author? Who makes the choice? How does cooperation with publishers happen?

There are no organizations that I know of that specifically promote Russian literature - but if there are, please tell me!

As an author, I don't know much about how publishers acquire their titles - sometimes they seem to do so with their eyes closed, in the dark, underwater. And drunk. But I presume that an acquisitions editor needs at least a chapter and a summary of the book, in a decent translation. Usually it's submitted through an agent. I would think contacts made at the London and Frankfurt books fairs would be useful.

Foreign authors and their translators can also make themselves known through publication of articles and stories in literary journals, including the New Yorker, Harper's, the Paris Review, Granta, Agni and n + 1. I imagine that it would be the translator, with a finished copy of the translation, who makes the submission to these publications.

What is necessary to do in order to help the translators in their work, and, also, to assist promotion of Russian literature in the United States, and, of course, to find new, interesting authors? Is it useful for translator to live in the country of his author?

It's certainly not necessary for a translator to live in the same country as the author, but he or she should definitely consult and stay in touch with the author. The most crucial aspect of a translation is the grace, fluency, and expressiveness of the translator's writing style. Perhaps the greatest bar to the publication of more foreign literature in America is the poor quality of the available translations. It's usually better to have a translator whose native language is the language of the prospective reader, and not the language of the writer.

Which person in Russian literature today is most interesting for you? What American writers should Russians know more about?

My favorite contemporary Russian writers include Tatiana Tolstoya and Ludmilla Petrushevskaya, whose recent collection of stories, published here as "There Was A Woman Who Wanted Her Neighbor's Baby" was electrifying. I also recently read, in Snob, a compelling story by Vikotoria Tokareva. I'm hoping Snob will continue to publish more fiction and literary work.

For me, Snob is the most exciting recent development in Russian print culture, and I'm very pleased to subscribe. It's lively, it's colorful, it publishes fiction, it's good practice for my Russian. The magazine is of course addressed to a Russian-language readership, but its presence raises awareness of Russia's contemporary life everywhere.

Modern American writers: The American novel that made the biggest splash in 2010 was Jonathan Franzen's "Freedom," which measures the difficulties of liberal individualism in a society of boundless choice, political stagnation, useless affluence and environmental degradation. These themes should resonate with Russian readers. I know that Gary Shteyngart's novel, "Super Sad True Love Story," has already been published in Russian—it's one of the truly hilarious dystopian novels.

I also recommend another novel from last year, "The Russian Dreambook of Color and Flight," by an American writer, Gina Ochsner, whose limited experience of Russia is more than made up for by her powerful imagination. (My review of it is available on the New York Times website.) The novel is set in Perm, in the mid-1990s, and it rings true to me. I think Russian readers will be very entertained by it.