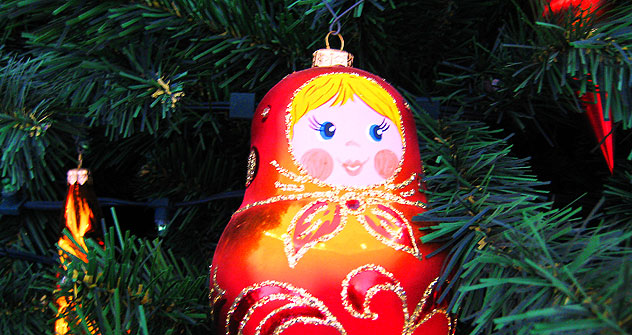 A quick day trip from Moscow, Klin could be called the birthplace of Tchaikovsky’s Nutcracker.

The old town of Klin, 70km (43 miles) north of Moscow, is a good, wintry destination. Pyotr Tchaikovsky composed the Nutcracker in a wooden house in the suburbs and you can visit the Museum of Christmas Decorations, as well as churches, cafes and monuments on either side of the winding River Sestra.

“I can’t imagine myself living anywhere else,” wrote Tchaikovsky in 1885. “I am unable to do justice to the charm of the Russian landscape and the silence, which I need most of all.” Since Tchaikovsky’s day both the charm and the silence have been somewhat eroded by Soviet tower blocks and the thundering Leningrad Highway, but the house-museum itself, in its wooded park, is still very much worth seeing. In the gray wooden mansion where Tchaikovsky spent his final year, 1892-1893, the composer’s furniture has been lovingly preserved, including the grand piano. The museum hosts regular concerts, but only winners of the annual International Tchaikovsky Competition are ever allowed to play the composer’s own piano.

In one particularly atmospheric outbuilding, there is an exhibition about the nearby Demyanovo Estate, which Tchaikovsky frequently visited, about half an hour’s walk away in the countryside. The young Alexander Pushkin stayed at Demyanovo in 1811 on his way to Tsarskoe Selo. In the late nineteenth century, the house belonged to the musical Taneev family, hosts to such diverse characters as symbolist poet Andrei Bely and botanist, Kliment Timiryazev. The composer and pianist, Sergei Taneev was a student of Tchaikovsky’s at the Moscow Conservatory.

All that is left of the Demyanovo estate now is an old ornamental lake and the ruined brick shell of the mansion. A scattering of ponds and outbuildings beyond the house complete the desolate, but atmospheric scene. The church, recently restored for its 300th birthday, has information panels inside with a map of the former estate.

Klin’s oldest church, the lovely, single-domed sixteenth century Church of the Assumption, stands on the riverbank beyond a valley full of wooden houses. More centrally, the imposing, but dilapidated Trinity Cathedral, converted in the 1950s into a Palace of Culture is now slowly being turned back into a church. Nearby are the old, red brick elementary school and the late nineteenth century trading rows, which still house shops and cafes.

Entrance to the trading rows in Klin

In a muddy courtyard behind the Trinity Cathedral, are the remains of another church and its concrete-covered bell tower. This is the site of the medieval, earthen-walled kremlin, in a strategic position above the river. A statue of Tchaikovsky stands in a square nearby.

Across the Leningrad Highway is the town’s Historical Museum. This gem of a local museum (open Wednesday through Sunday) is cheap and friendly. The usual chronological display of local artifacts and stuffed wild animals is given a distinctive flavor by relics from the post road that passed through the town after St Petersburg was founded and a great selection of old photos. These include the air balloon that carried scientist Dmitry Mendeleev to a neighboring town in 1887 and records of Klin’s three-week occupation by the Nazis in 1941.

The red brick and white stone Church of the Consolation of All Sorrows across the road, was built in the mid-nineteenth century. It now stands in a park full of war memorials.

Ulitsa Gaidara, to the north, is named after Soviet children’s author, Arkady Gaidar, who lived at number 17. The charming wooden house is now a museum. Gaidar, like Tchaikovsky, was attracted to Klin by the pre-war quiet and wrote his popular stories about “Timur and his Gang” in the modest study-cum-bedroom before being killed by the Germans.

Nearby is the green-roofed Museum of Christmas Decorations, one of Klin’s highlights. There are regular tours of the workshops and collections. Besides twelve exhibition rooms with decorations from the last 150 years, you get a chance to see skilled workers blowing and moulding new ornaments, stretching the molten glass like toffee, painting on seasonal designs or adding the final touches of glitter. Each tour comes with a free souvenir bauble. Afterwards, you can pop into the shop at the front of the building where the finished decorations and artificial Christmas trees are for sale.

Alternatively, you can catch bus 437 from metro station Rechnoi Vokzal, which stops right outside Tchaikovsky’s house on its way into town.

You can find more information about the museum at http://www.museum.ru/MscReg/e5_hist2.htm

The “Russky Club” in the old trading rows is a good place for lunch and there is a decent coffee shop on Ulitsa Gagarina.