Solikamsk: salt on the Kama 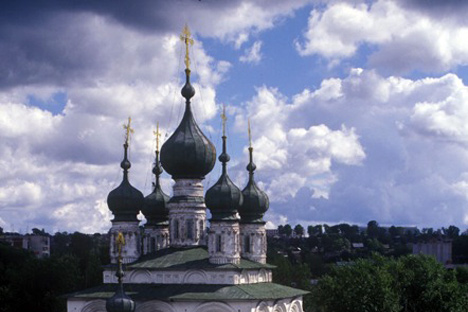 Perhaps the most impressive ensemble of regional Russia

For historic architecture in Perm province, the city of Solikamsk (current population around 110,000, located near the Kama River some 370 kilometers to the north of Perm, has perhaps the most impressive ensemble. Solikamsk, whose name means "salt on the Kama," was founded in 1430 when the Kalinnikov merchant family (from Vologda, in the Russian north) established a salt works there. To this day the economy of Solikamsk depends heavily on the mining of potassium and related salts.  By the end of the seventeenth century Solikamsk also served as a major transit point not only to Siberia but also to China.

The combination of salt refining, administration, and transportation of goods to market created the economic base necessary for major construction in Solikamsk, particularly of churches. Despite the losses suffered during the decades-long Soviet suppression of religion, Solikamsk (current population ca. 110,000) has preserved many of the buildings of its historic center.   These and other architectural monuments are all within walking distance of the main market square, which to this day defines the center of Solikamsk.

Among the monuments of religious architecture in Solikamsk are the late 17th-century Trinity Cathedral, with its adjacent 60-meter bell tower and spire that looks like some odd transplant from St. Petersburg--as well it might, due to its construction in 1713.  Not far from Trinity Cathedral is the picturesque Epiphany Church with its colorful ceramic tile decoration. The interior has a superb early 19th-century icon screen miraculously intact.

The fourth major element of the central ensemble in Solikamsk was the Cathedral of the Elevation of the Cross, begun in 1698 and consecrated in 1709.  From its location on the left bank of the Usolka River, this church anchored the view of Solikamsk from the west.  Simple in plan and unusually broad in proportions, the church had one large cupola, originally covered with wooden shingles. During the Soviet period, when the building was converted into a brewery, all elements above the roof were removed.

There are other churches and monasteries in Solikamsk, most of which are grouped in easy walking distance to the central market square. The extraordinary architectural ensemble at the center of Solikamsk forms one component of a creative surge at the end of the seventeenth century and the beginning of the eighteenth.  Some 200 meters to the east of the central ensemble stands the Transfiguration Convent, endowed in 1683 by Evdokiia Shchepotkina, the widow of a Moscow merchant who had enriched himself through trade with Solikamsk. Despite its endowment, the convent was poor, and contemporary accounts note that it had no fields of its own or fishing rights. For daily support the convent depended on the alms gathered by the nuns, who lived in modest log dwellings typical of the central area of Solikamsk.  Nonetheless, from its inception the convent was endowed with a pair of brick churches, one for use in winter and the other a "summer" church.

The opposite, western end of Solikamsk is marked by the Monastery of the Ascension, which existed as early as the second half of the sixteenth century.  Rebuilt in 1608, the monastery consisted of wooden buildings until the end of the seventeenth century, when work began on the Church of the Ascension (1698-1704), another peculiar masterpiece in the Solikamsk repertoire. Its one cupola and simple roof surmount a white-walled structure that is among the most richly decorated in Solikamsk. A second masonry church in the Ascension Monastery was completed in 1731 and dedicated to the Saint Michael Malein .  Although more simple in decoration, the church flanks the main, east, gate to the monastery and served as the base for the monastery bell tower.

The farthest architectural dominant on the western fringes of Solikamsk is the Church of John the Baptist, situated in what was formerly known as the village of Krasnoe.  Located near the banks of the Usolka, the soaring forms of the church and its six-tiered bell tower could be seen from the Kama River, and thus served as a beacon for boats headed toward Solikamsk via the Usolka River. The tall forms of the Church of John the Baptist arose in two stages.  The first stage, the "lower temple" dedicated to John the Baptist, was begun in 1715 and completed in 1721 with the support of a donation by the salt merchant Ivan Surovtsev.  The upper church, dedicated to Saint John the Warrior, was completed in 1772 with a donation by Count Aleksei Turchaninov, who owned the village of Krasnoe as well as a large copper smelting factory. The facades of the Church of John the Baptist display the decorative flourishes typical of the Solikamsk style.

During the reign of Catherine, however, the path of further mining and industrial development in the Urals shifted to the south, to the newer settlements of Perm and Ekaterinburg, which were served not by the Babinov Road, but by the newly opened Siberian Route. Nonetheless, Solikamsk experienced modest growth in the latter part of the nineteenth century, a revival evident from a number of brick buildings whose design is typical of Russian provincial towns. The major reason for this positive turn was the renovation in the 1870s of local salt works under the ownership of the Riazantsev family. Indeed, salt continued to be produced at the former Riazantsev works (under Soviet ownership) until 1972, and a number of the massive 19th-century log buildings have survived--a rare surviving example of log "industrial" structures.

Fortunately, mining enterprises continue to give Solikamsk a reasonable prospect of economic stability and growth. On that basis the city's architectural heritage--with the support of the Orthodox Church--will survive as one of regional Russia's unique historic ensembles.