12 (Russian) ways to end your holidays 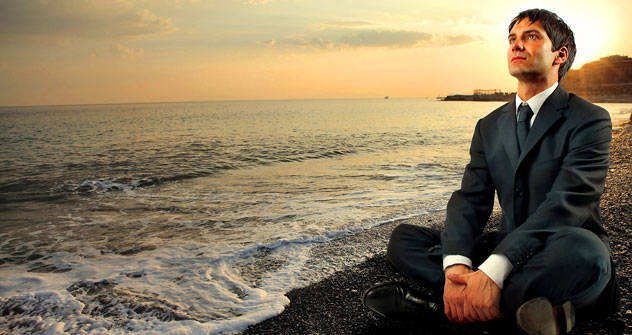 Sooner or later, every holiday comes to an end. Russia’s New Year celebrations, which last 10 days, are no exception. A reluctance to interrupt the "dolce vita" may affect even the most diligent of workers. On Jan. 11, millions of Russians had to solve their first problem in the office: How to adjust back into work mode.

Neither Soviet anti-alcohol campaigns nor modern propaganda about healthy living has made much progress in overcoming the Russian tradition of marking the New Year celebrations with strong alcoholic drinks; vodka remains the favorite. Returning to normal work patterns after such celebrations is not always easy. However, Russian cuisine, having absorbed various culinary embellishments from a range of cultures, has already worked out a few recipes to help free one’s body from any adverse effects of alcohol. Borshch (a hot beetroot soup) is particularly popular, as is the Armenian dish of khash (a fatty soup made from leg of beef). If celebrations weren’t too heavy and your hangover isn’t bothering you too much, then some ayran (a slightly salty cultured milk drink, fairly similar to drinkable fat-free yogurt) won’t go amiss. These options have rescued many a thousand Russians from hangovers and returned them to everyday normality.

After the fall of the Iron Curtain, millions of Russians suddenly had the opportunity to travel abroad. There is already a tradition among many of them now to celebrate the New Year in warmer climates – Egypt, the Maldives, Thailand – a little further away from the predictable Russian snow. But there is a flip side to this tradition. Often Russians are forced to return from temperatures of 30 degrees (or higher) to frosts of minus 30 degrees (or lower). Putting such a colossal burden on your body is rare. The number one rule for tourists in this situation, therefore, is not to catch a cold in the first few hours or days of their return – or the rest of January will be overshadowed by a need to drink mixtures and medicines. When ordering a taxi at the airport, Russians request the car to be heated before they get in, and reduce the amount of time spent waiting outside to a minimum. As for the problem of an empty fridge when you get back home, either relatives or delivery services, which are already actively used in Russia’s large cities, are helpful options.

How to avoid Groundhog Day

In order to wash faces and bodies clean of all the traces of festive parties, Russians head for the banya (or if there isn’t one nearby, a contrast douche will also do). We’ve already written about the merits of the Russian banya in a previous feature (’12 Russian Wonders’). In case you intend to go back to work in the next few days, there’s one rule you need to remember: Never give in to provocation and incitement from your bath-mates to add to the ‘banya effect’ with beer or any other form of alcohol. These days, herbal tea from a samovar is an acceptable substitute at a Russian banya.

The bear, Russia’s oldest symbol, sleeps practically the entire winter. When he wakes up in spring, he is hungry, but full of energy and determination to fill his stomach with fresh delicacies. One Russian method of preparing for the new working year... is also sleep. Making up for lost sleep over the course of the 10 days’ holiday can be very attractive.

Winter sports are yet another way of shaking off holiday sleepiness for Russians. In three years, Sochi will play host to the Winter Olympics, but even now sporting hopefuls are able to test their strength at Alpine skiing or ice-skating. What’s more, sessions don’t take place in stuffy indoor halls but in the open air. A sportsman can relax and take things easy during a warm summer, but during an icy winter it’s only by moving that he can stay warm and not catch a cold. After this kind of exercise it’s difficult not to feel better: flushed cheeks and relief of headaches are guaranteed, and you can go back to work with confidence.

A note for the careerist

Russian careerists will have planned their program of post-holiday rehabilitation and readjustment to working mode long ago. The first steps are generally taken even before the holidays begin – they’ll develop detailed plans for the year ahead and name their aims for the first working week or month. And there was no chance of departing from these plans – they’ll have acquainted their bosses with them and obtained their approval. Career-crazy managers simply force themselves to believe that going to work is an unavoidable part of life (because their work, as they persuade themselves, actually is their life), and that relatives and close ones can wait, even on holidays.

A note to the bosses

Bosses in Russia also have their tricks for how to get themselves and their employees back into working mode. Rule number one: Remove everything from the office which could remind your colleagues of the recent festivities, in advance. Even better if this is done by a cleaning person on the weekend and not the employees themselves on their first day back. Photos, posters and balloons should all be cleared – they may have looked lovely when everyone was feeling festive together, but are completely superfluous in the daily grind. Greeting cards from business partners must also move on from the information stands and reception area to the office archives. Particularly strict directors give their subordinates assignments over the holidays, even if relatively uncomplicated ones – while not especially onerous, they prevent the worker from relaxing too much and losing his form.

In Russia, chatting on the phone is traditionally considered one of the favorite pastimes of women. And if men, as a rule, limit their words to describing their holiday as as "alright" or "great," with a small selection of details, then representatives of the fairer sex are ready to discuss the details for quite a while. The tradition of hanging on the phone  came into being long before the world knew of mobile phones. Russian women aren’t afraid of sitting in one place – in Soviet times there wasn’t a great deal of entertainment and so many ladies turned out to be practically chained to the telephone set. Nowadays, in order to reset themselves into working mode, many women call their colleagues, asking how the holidays went, what surprises they discovered under the Christmas tree and so on. In the excitement of the conversation even work-related themes begin to be mentioned, which prepares them for getting back to business, and allows them to establish more trusting relations with their business partners.

This is a relatively new method among Russians. In Soviet times there wasn’t really much selection in shops, and so wardrobe updates occurred only very occasionally. Now it’s not only possible to find things to suit any taste, but to find them under various sales and discounts. So it is that many Russians getting ready to go back to work after the holidays don’t deny themselves the satisfaction of buying something new in the shops and boutiques. Many believe that this is one of the most pleasant ways of readjusting to working mode. An aspiration to improve your business appearance combines very well with career-building.

Yet another method which is characteristic not so much for the New Year holidays as for an extended break in general. Psychologists advise turning up at work a day earlier than the given date. You don’t need to work – it’s enough simply to call in at the office, find out the news, estimate the extent to which your affairs have accumulated over the holidays and chat with colleagues. In this age of information many people are substituting this with the opportunity to socialise via an Internet messaging service. (True; you do need to take into account that use of these programs is forbidden in a host of large Russian companies.) However, there is not much sense in going to back work on the last day of the holidays – there won’t be anyone there anyway. So some arrive at the office an hour earlier than the specified time. As soon the working day has started, your colleagues’ questions about the recent holidays won’t allow you to organize your affairs in peace.

There is another way of putting yourself back into working mode – self-motivation. Russians remind themselves that it used to be possible to blow off work, but the arrival of a brighter future in the form of Communism has now been postponed indefinitely. Workers who use their initiative and are competent in their jobs now receive all their rewards simply by working hard – there’s no wage-leveling. Therefore it does pay to give yourself a shake and start engaging with your profession, as if you didn’t actually want to be wallowing on a beach. All the more so, given that your wife has long said the tiles in the bathroom need changing and she would like a mink coat for her birthday, and the children want a more advanced computer or new gadget, all of which can add up.

As Confucius once said: "Do that which you love to do, and in your life there will not be a single working day." If none of the above-listed methods helps you readjust back at work, then there is only one option left – turn your work into a holiday. If you enjoy your work there won’t be any particular problems. If your work no longer brings you satisfaction and the mere thought of dragging yourself into the office on Jan. 11 evokes disgust, it’s time to look for a new job.