Anna Chapman to reveal the “Secrets of the World” 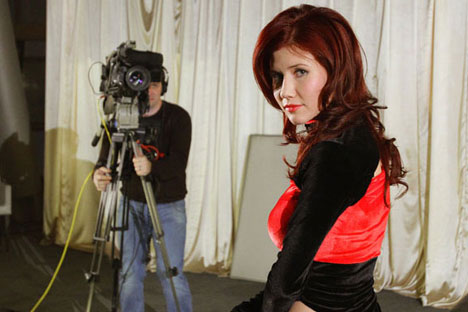 The former spy capitalizes on her popularity by trying her hand at showbusiness.

Russia’s Anna Chapman, an international celebrity since the spy scandal last summer in the United States, will not allow her fans and critics to forget about her. As predicted earlier, it would be odd if Anna didn’t take this chance to convert her fame into money and a career. And indeed, the full throttle of her career in the six months since she returned from a U.S. jail to the Motherland recalls the blast-off of a spaceship. Incidentally, the former secret agent was spotted recently at the Baikonur launching site during the send-off for a Russian-American crew about to launch into orbit. Her secret mission while there remains a mystery.

And before that Chapman and her fellow spies were received by Vladimir Putin himself. The prime minister described the meeting to journalists: “We talked about life and sang the song Where the Motherland Begins.” This song from a Soviet cult film about spies called “Sword and Shield” is the unofficial anthem here of all members of the spying profession. And then there was an even grander reception for Chapman & Co. in the Kremlin where the Russian president decorated them with the Motherland’s highest awards.

This celebration in honor of the exposed spies was disagreeable to many. Russian bloggers split into two camps. Some raved about Anna: “Bravo! Our country needs patriots like her!” But others were indignant: “What has she ever done to deserve a medal?” If you consider that just before the awards ceremony a pistol-packing Anna managed to appear in just her underwear in a men’s magazine, then you can see why emotions were running high. One popular Russian newspaper growled: “A bare bottom and a medal do not go well together and indeed they should not go together at all.”

It is puzzling to the innocent observer. Why should Russia suddenly lavish so much attention on a bunch of failed spies? Why should Russia turn them into heroes of our time? But it’s not that simple. To people brought up in the traditions of Soviet patriotism (and they are still a majority in Russia), the image of the spy has always been truly heroic. It inspired many films. Soviet moviegoers knew nothing of James Bond, but they took genuine pride in their own Shtirlitz — the hero of a popular TV series about a Russian officer in the German Gestapo. They say that when the first installment premiered in 1973, Soviet nightlife came to a halt: Everyone rushed home from work to watch. Even today the series remains a favorite and is constantly rerun on television.

The Soviet Union’s Shtirlitz, as opposed to Britain’s Bond, rarely used physical force. The focus of this series was a highly engaging duel between two outstanding minds: the Russian spy and the Gestapo chief. It was assumed that the Soviet officer should vanquish his German opponent by means of his moral superiority, not by physical might. Given that, there could be no discussion of the hero’s sexual escapades. In the entire Shtirlitz series there is only one personal scene, and that is with his wife: They are sitting in a café at different tables and looking longingly across at each other while piercing music plays in the background. Women always cry during this scene. True, Shtirlitz does resemble James Bond in one way, he’s tremendously good-looking. Spies in Soviet films were always played by sex symbols.

In the 1990s the image of the Russian spy didn’t just lose its luster, it literally disintegrated before our eyes. We were forever reading about the latest Russian spy to defect to the West. Those defectors gave long interviews and sold Russian secrets without demur. The very concept of a “Russian intelligence agent” seemed spent and unlikely to revive. We desperately needed a new Shtirlitz. Enter Anna Chapman.

This enterprising young woman has squeezed everything she could out of the spy scandal — as indeed she should have. But Russia’s Foreign Intelligence Service (SVR) has also received unexpected dividends from all the publicity surrounding this new heroine of our time. As they say, every cloud has a silver lining. It was soon discovered that there had been no failure as such, that the spies had been exposed by another defector/traitor, which meant that the spies themselves were not to blame for their blown cover. In which case Chapman’s revealing pictures with pistol could be seen as part of an ad campaign. The days of the ascetic Shtirlitz are long over. The ordinary person raised on Hollywood films knows that the life of 007 is all fantastic adventures in still more fantastic locations. Far be it from us to disappoint that person: now Russia has its own James Bonds and Mata Haris! I won’t be surprised if the SVR suddenly finds Anna Chapman wannabes lining up outside the door.

As for the awards ceremony in the Kremlin and the tea party with Putin, that too is a sort of message to the concerned public: The Russian state takes care of its own. If need be, the state will get its citizens out of jail, give them medals and find them good jobs. Incidentally, all of Chapman’s former fellow spies have received good positions in banks and oil companies. As for Anna, she spent a long time looking — and eventually settled on a job as an advisor to the head of a bank. But everyone knew that that wasn’t for her. Indeed, why after all that worldwide fame should she vegetate in some bank? Sort of small potatoes. So here’s the latest: Anna has been recruited to host a weekly TV show called “Secrets of the World.” According to the show’s creators, “the most mysterious woman will host the most mysterious program.” It’s a fail-proof moved. I’m not sure the whole country will be watching the first show, but certainly the TV channel can count on high ratings. True, fame alone can’t carry a show. If it’s not a success, it won’t matter how much Anna did for her country. But she’s a seasoned fighter — if she doesn’t make it on television, she’ll try film. Why not? What we’re now witnessing is a genuine reality show from the life of an ex-spy in whom millions of people continue to be interested. Stay tuned!