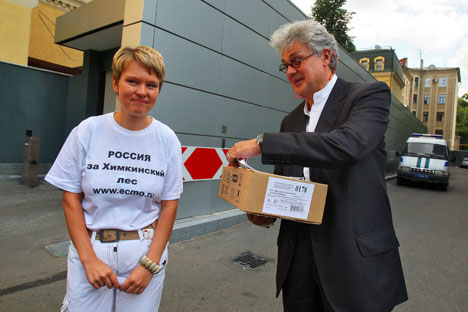 EBRD abandons plans to finance the highway through Khimki forest.

The EBRD estimated the total required investment at $6 billion, of which it was were ready to commit up to $1.5 billion together with the European Investment Bank.

The first section of the new highway, between the 15 km and 58 km marks, will be a toll road planned to run through a forest in Khimki, a Moscow suburb. The section could be completed in three years, according to an announcement made by the first deputy chairman of the Avtodor executive board, Sergei Kelbakh, on Jan. 13.

The construction of this particular section has caused mass protests by environmentalists, who have accused the contractors of destroying the ecosystem there.

“The EBRD is not a participant in this project. There are financing arrangements together with a pool of other banks,” Wallace said, without specifying if his bank is considering financing other sections of the highway.

But Alistair Clark, EBRD Corporate Director for Environment and Sustainability, said in a letter to Russian environmental organizations dated Jan. 12 that any future participation in the project was “unlikely.”

The North-West Concession Company (NWCC), co-owned by the N-Trans Group, together with companies owned by the entrepreneur Arkady Rotenberg and the French corporation Vinci Concession, is carrying out the highway project. State-owned Vnesheconombank (VEB) and Sberbank are financing the construction of the controversial 15—58 km section. Both banks have allocated 29.2 billion rubles for the project. Besides obtaining bank loans, the NWCC has placed a total of 10 billion rubles in state-backed bonds. VEB has bought close to 70 percent of the offering. State financing from the Investment Fund amounts to 22.85 billion rubles. NWCC has more than 8 billion rubles of its own cash. Sergei Kelbakh has estimated the required investment in the first leg of the highway at 66 billion rubles, of which 4 billion rubles has been allocated to compensate for any environmental damage. As a result, NWCC could end up paying more than 95 percent of its investment needs from the government’s pocket.

EBRD participation in the project was called into question after a harsh crackdown on public protests by activists defending the Khimki forest. The demands of the environmentalists for an alternative route were ignored, but the Central and Eastern European environmental NGO BankWatch supported its Russian colleagues and convinced the European Commission to freeze financing talks. EBRD rules prevent the bank from taking part in projects that damage the environment.

At that point, the consultations were suspended but not yet terminated. Now the EBRD has made a final decision.

Richard Wallace said the highway is still an important project for Russia’s economy. “Its promoters, however, decided to move forward without the EBRD,” Wallace said. “We always ask our counterparties to comply with many conditions, and receiving financing from the EBRD is a complicated thing to do. We did a lot of work on this particular project but eventually didn’t take part in it.”

The EBRD’s withdrawal from the pool for financing the highway won’t affect the bank’s other projects, Wallace insisted. He said that Russia remains a priority area for the EBRD. “We make around a fourth of our investment in Russia. The preliminary total for 2010 is close to $2.5 billion,” he noted.

“This is a telling sign; the EBRD has very high standards, and their participation in any project is like a seal of approval. We hope Vinci will withdraw as well once they realise the project is rife with corruption, damaging to the environment, and anti-social to boot,” an activist for the Defend the Khimki Forest Movement, Yaroslav Nikitenko, told Gazeta.Ru. “The project has been promoted as an international one, but everybody’s pulling out. We will be letting the French public know what kind of project their company is involved in. The French green activists support us. They picketed the Vinci headquarters and had a set-up in front of the Louvre in defense of our forest.”

Andrei Margulev, the coordinator of Russia’s Public Environmental Organizations Union, expressed no surprise at the EBRD’s decision. “The bank was planning to participate in the project, but they changed their mind. A respected organization doesn’t want to be involved in a dubious project. But this is important only in terms of moral support to our position. The lobbyists have found the money domestically. Sberbank and Vnesheconombank will be investing in this supposedly lucrative project.”