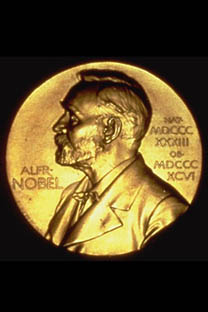 The peace prize could become far more effective if it were awarded not for past accomplishments but as an advance for future moves toward peace and freedom.

The old slogan of “no justice, no peace” still rings true. Since a monumental miscarriage of justice was perpetrated at the end of December, when former Yukos CEO Mikhail Khodorkovsky and his business partner Platon Lebedev were found guilty of trumped-up charges and sentenced to 14 years in prison, there has been persistent speculation that the Norwegian Nobel Committee will award this year’s peace prize to Khodorkovsky.

Indeed, the former oligarch, who has been in jail since he was arrested in October 2003, has transformed himself into a courageous opponent of lawlessness and corruption in Russia. He is now a symbol of dissent almost as potent as an earlier Nobel Peace Prize laureate from Russia: physicist and human rights advocate Andrei Sakharov.

The Kremlin is already making preparations in case Khodorkovsky is chosen by the Norwegians. Russia joined China and a handful of other oppressive regimes in boycotting last year’s peace prize award ceremony, when the prize was given in absentia to imprisoned Chinese dissident Liu Xiaobo. Just like when Sakharov received the Nobel Prize in 1975, Russian leaders will likely dismiss the Nobel committee as irrelevant, meddlesome and reactionary, which is what Beijing leaders have just done.

But the anger and vitriol directed at the Nobel Peace Prize by politicians who stymie dissent, oppress their citizens or commit injustice is the best proof that the award remains relevant. Over the years, it has drawn international attention to the plight of prominent human rights activists and dissidents and kept the heat up on unsavory regimes — causes that Nobel laureates such as Martin Luther King, Desmond Tutu, Lech Walesa and others championed have eventually triumphed.

But many laureates still languish. Myanmar dissident Aung San Suu Kyi remains under house arrest two decades after winning her Nobel Prize. Moreover, some awards have been an embarrassment, such as the peace prizes given for the Paris accords that ended the Vietnam War, or the Oslo agreement between the Israelis and Palestinians that went nowhere. The peace prize could become far more effective if it were awarded not for past accomplishments but as an advance for future moves toward peace and freedom.

Imagine if the 2011 Nobel Peace Prize went to President Dmitry Medvedev as an advance to issue a pardon to release Khodorkovsky and Lebedev, who could be named as joint recipients of the award. But Medvedev’s award would be conditional: if by the time the award ceremony takes place in early December Khodorkovsky and Lebedev remain in jail, the Russian leader doesn’t get his prize.

For all their hostile rhetoric, every political leader, no matter how egregious, dreams of leaving his mark on history as a man of peace. Medvedev surely would work hard to get Khodorkovsky and Lebedev freed to avoid the embarrassment of losing the prize.

If it works for Khodorkovsky, the peace prize could then go to Israeli Prime Minister Benjamin Netanyahu and Palestinian Authority leader Mahmoud Abbas to see whether the prospect getting and then losing it doesn’t spur their enthusiasm for negotiating peace.

The Nobel committee has already taken steps toward encouraging good behavior when it gave the 2009 prize to U.S. President Barack Obama only months after he was elected. The Obama administration didn’t end the wars in Iraq and Afghanistan, but on the contrary stepped up U.S. drone attacks in Pakistan. I wonder if Obama wouldn’t have worked a lot harder to bring peace to those countries if he had run the risk of losing his Nobel Prize.

Alexei Bayer, a native Muscovite, is a New York-based economist.