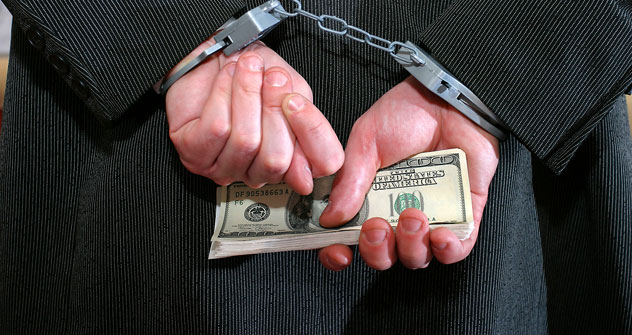 New proposed criminal statutes will increase the punishment for giving or accepting bribes.

According to an official close to the Anti-Corruption Council, the presidential administration has drafted a new anti-corruption bill. Proposals include new corruption fines in multiples of the amount of the bribe; laws to cover a new type of bribe-taker—an officer of a public international organization; a new punishable offense—mediation in bribe-taking; and finally, a new way to fight institutional corruption— investigations conducted by Russian authorities abroad. These new proposal may be a reaction to President Dmitry Medvedev’s recent parliamentary address, in which he called for higher fines for bribery and tougher punishment for middlemen.

Views on the fines within the Presidential Council differ, confided an official close to the presidential administration. Some believe them to be an effective stand-alone measure, while others think the fines should only be combined with prison terms. The Council of Europe’s Group of States against Corruption (GRECO), which monitors corruption in Russia, subscribes to the latter view. GRECO believes it is wrong for the same offense to be punishable by either a long prison or with a fine.

Viktoria Burkovskaya, a lawyer with Yegorov, Puginsky, Afanasiev & Partners, believes the inevitability of punishment is important, rather than the size of the fine: “For one thing, I cannot recall a single company being prosecuted administratively for corruption, despite a series of corruption scandals, such as the Daimler case.”

The Criminal Code will be expanded to cover a new type of offense – bribery mediation. This includes not only handing over a bribe on the instructions of a bribe-giver or taker, but also facilitation of conspiracy to bribe. An intermediary will either be subject to a fine 20 to 90 times the bribe and stripped of the right to hold certain positions, or a find plus imprisonment for up to seven years. Businessmen who report attempted graft or middlemen who cooperate in investigating an offense may be exempt from punishment.

Burkovskaya is certain, however, that the amendment to the Criminal Code will not solve the problem. Bribe-taking is often classified as fraud, because those who get caught with cash in hand tend not to be those who are in a position to make good on whatever had been promised. She thinks, however, that even now such people could be charged with mediation if it can be established that they are linked to those who can actually deliver. The problem boils down to shoddy investigative work.

The presidential council has also defined new type of corrupt official – an officer of an international public organization, including any appointed or elected official of a legislative, executive, administrative, or judicial authority of a foreign country, as well as any person carrying out a public mission for a foreign state, any of its agencies, or a foreign public company, and any employees or authorized persons of an international organization. The punishment described for this category is slightly more lenient than that for Russian public officials.

The objective is to fight corruption overseas: If a Russian businessman pays a bribe to a UN employee or an official in Angola in exchange for a lucrative contract, he will be punished in Russia, too, explains Transparency International Russia Director Elena Panfilova. Introducing this sort of liability is a pre-requisite for Russia to accede to the OECD Anti-Bribery Convention.

Administrative liability for paying or offering an illegal remuneration on behalf of a legal entity will be increased to a fine equivalent to100 times the amount of the bribe. Currently, the punishment is three times the amount, but a minimum of 1 million rubles. The proposed mechanism for legal aid in cases of administrative offenses is designed to investigate corruption by Russian companies overseas. The Prosecutor General’s Office, the Supreme Court and Supreme Arbitration Court, the Justice Ministry, the Ministry of the Interior, the Federal Security Service, and the Federal Drug Enforcement Service will be entitled to send queries to foreign colleagues independently. Those agencies will be able to request personal data and information about the whereabouts of persons of interest, any documents or other evidence, or statement of facts of an offense, and even to subpoena witnesses or victims to come to Russia (with guaranteed immunity from criminal persecution). Russia will, in turn, accommodate similar requests from other countries.

Ilya Rachkov, a partner at the Noerr law firm, said that, although Russia’s international treaties currently do not provide for legal aid in cases of administrative offenses, Russia could still submit such requests on a reciprocal basis under the general principles of international law.