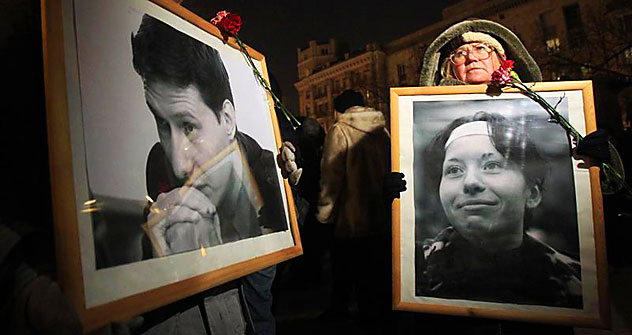 Audio tapes emerge in the investigation into the murders of lawyer Stanislav Markelov and journalist Anastasia Baburova.

New evidence has come to light in the high-profile murder case of human rights lawyer Stanislav Markelovand Novaya Gazetacorrespondent Anastasia Baburova. Taped conversations at the apartment of Yevgenia Khasis and Nikita Tikhonov, who have both been indicted on murder charges in the case, are expected to play a crucial role, although defense lawyers claim that the tapes do not contain incriminating proof of their clients’ guilt.

Markelov and Baburova were gunned down in Moscow on Jan. 19, 2009. Public outrage over the murder caused President Dmitry Medvedev to take the case under special review.

Markelov represented Anna Politkovskaya and Elza Kungayeva as well as the family of Alexander Ryukhin, an anti-fascist stabbed to death by a gang of neo-Nazis in 2006. During the trial, several neo-Nazi websites posted photographs of Markelov online, calling for the killing of “the terrorists lawyer.” At the close of the trial, the court sentenced those accused of Ryukhin’s murder to lengthy prison sentences and put several suspects, including Nikita Tikhonov, on the wanted list. Tikhonov was a prominent right-wing nationalist leader who took part in launching the journal “Russky Obraz” (Russian Image)in 2004. His girlfriend, Yevgenia Khasis, attended the court hearings in the Ryukhin case and was friendly with the neo-Nazis convicted of the murder.

According to the indictment against Tikhonov and Khasis, in November 2008 they conspired with several other unidentified people to kill Markelov. Tikhonov masterminded the entire plan and acquired a 1910 Browning pistol with ammunition. This weapon was later found in the apartment he shared with Khasis. Upon being detained, Tikhonov’s said that he had been tracking Markelov’s movements long before the day of the murder, although he later retracted his testimony, claiming it had been forced out of him during questioning.

Tikhonov said that the group decided to kill Markelov on the day Yuri Budanov, Elza Kungayeva’s murderer, was released in order to direct suspicion onto people from the Caucasus. Budanov, a Russian army officer, was convicted of killing Kungayeva, a young woman from Chechnya, and was paroled after serving eight years of a nine-year sentence.

The investigation into Markelov’s death indicates that Yevgenia Khasis was shadowing Markelov during Budanov’s press conference and signaled Nikita Tikhonov when Markelov left the courthouse. After receiving the signal, Tikhonov allegedly walked in the opposite direction of the lawyer and the journalist, but then turned around, caught up with them and shot Markelov in the back of the head near 1 Prechistenka Street in central Moscow. When Baburova turned around, he shot her in the head and then shot Markelov again to make sure he was dead. Hiding his face behind a scarf and hat, he fled toward the metro. En route, some people who had heard the shots witnessed him hurrying along and were later able to identify him. Khasis lingered around the scene of the crime until she was sure Markelov was dead, her behavior arousing the suspicions of some passers-by who remembered the woman well.

After the murder, Tiknonov kept a low profile as his accomplices supplied him with cash. By fall 2009, Tikhonov and Khasis were under surveillance. At the end of October, they decided to move to a new apartment. Shortly after the rent contract was signed, investigators planted bugs in the apartment. Over the following weeks, operatives listened to every word Tikhonov and Khasis said. These tapes are thought to provide some of the main evidence incriminating them in the murders.

In the tapes, the accused discussed again and again how they would hold a standoff with the police should they try to be detained, and said that killing Markelov had brought them nothing but trouble. They were planning to flee Russia, but not until committing several more murders, according to the criminal investigation. For example, Khasis allegedly wanted to personally kill an athlete from the Caucasus; she said that would be a “blast.” Some close to the investigation believe some of Khasis’s accomplices carried out her wishes by killing world Thai boxing champion Muslim Abdullayev in December 2009.

Nikita Tikhonov for his part liked to tell his girlfriend about his previous and future plots, including how he wanted to murder an Orthodox priest who was “fairly influential in the Russian Orthodox Church.” When Khasis asked him how many people he wanted to kill, he replied that, if he could, he would do nothing but go around killing cops all day long.

Tikhonov and Khasis were detained quietly on Nov. 3, 2009. An arsenal of weapson, including explosives and a Kalashnikov, was discovered in their apartment.

After the police took Tikhonov and Khasis into custody, investigators began questioning nationalists, neo-Nazis and other acquaintances of the couple. They claimed a big victory when Ilya Goryachev, the leader of the Russky Obraz nationalist group, provided damning evidence against Tikhonov. However, Goryachev may refuse to testify in court because he fears for his life. Another prominent right-wing radical told police that Tikhonov had shown him a vintage pistol and was keeping a backpack with weapons at his home.

Yevgenia Khasis’s lawyer, Gennady Nebritov, admitted that the audio tapes do indeed exist, but claimed they “did not contain any direct evidence.” Nikita Tikhonov’s lawyer, Anatoly Zhuchkov agreed, saying: “The tapes have been declassified and included in the case. The conversations do not contain any incriminating information…The tapes merely show Nikita Tikhonov’s involvement in illegal arms trade.”

In contrast, Vladimir Zherebenkov, who represents the victims’ families, is sure the tapes prove the nationalists’ guilt. “There are tapes of them discussing the murder, their desire to kill other people, really mow some people down. The case contains a bulk of direct and tangential evidence. How it is all sorted out is up to the jury,” said Zherebenkov.