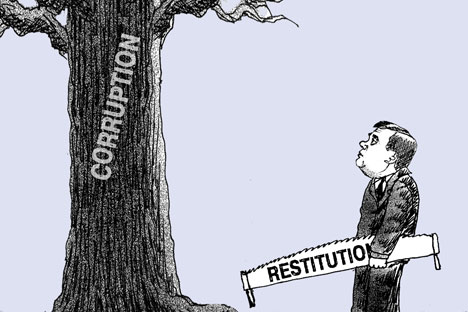 Is the Russian government trying to cash in on the sale of worthless media properties? President Dmitry Medvedev has announced plans to divest the state of its assorted media holdings. But, what’s a Russian media outlet worth? Newsweek magazine sold for just $1 last year. I wonder how much the Russian outlets will bring in.

Some insiders may already be anticipating a bonanza from the mass sell-off, but it is first worth asking whether all these media companies have any real commercial value.

From my experience, it is rare to find a profitable indigenous media company. More commonly, a business with an inadequate audience and advertising revenues will sell propaganda that masquerades as news to compensate for the revenue shortfall. Who’s going to buy into such a corrupt business?

Arkady Dvorkovich, economic adviser to President Dmitry Medvedev, said he’d like to keep the sold-off media companies out of the hands of “dishonest investors.” Interesting concept. The purpose of a commercial enterprise is to produce profits. Given that, what’s the value of one that produces losses?

Newsweek was put up for sale by The Washington Post Company because the publication was incurring losses. But before last year’s sale, Newsweek made a valiant effort to rehabilitate itself. Managers changed the audience makeup, did a graphic redesign and editorial repositioning, and attempted to boost revenues. But they made serious mistakes in judgment. Maybe the magazine’s new owner will have a better go at it.

Can the state-controlled unprofitable media companies in Russia be rehabilitated? Can they become legitimate businesses that will attract “honest investors”?

Some circumstances will make this difficult. First, there are too many media companies in Russia — more than the economy could support as legitimate businesses. Second, the media field generally has a deficit of business acumen. And finally, the ingrained corrupt culture of paid-for news would be a difficult institution to eradicate.

In addition, there is the question of whether the government really wants to get out of the media business. Some predict that the media outlets will end up being acquired by friends or supporters of the current political owners. Others suggest that the sell-offs are just a ruse to wrest control of the outlets from regional leaders and put them under the power vertical. Legislating “subsidies” to aid the “transition away from government ownership” seems consistent with that supposed scheme.

Medvedev’s initiative to get the government out of the media business is commendable. In his televised December interview, he asserted that news decisions should be made independently of governmental influence.

But this will be very difficult to accomplish. It doesn’t seem practical to assure absolute transparency of ownership or to know the allegiances of the new owners. What’s more, it is hard to define what is a government-owned outlet. The owner of record may appear to be an independent company, but the beneficial owner may be a politician or state entity.

Closing down hack media outlets is something that consumers can do. All they need are some good media outlets to choose from. That’s where the administration’s focus should be. It must create the conditions for truly consumer-centered media outlets to emerge and thrive. Those will be the outlets of consumer choice. The existing crop of self-censoring purveyors of dishonest news will be put in their place and marginalized, if not closed completely.

There is a good Russian proverb to characterize the original plan to sell the governmental media outlets: Beer without vodka is money thrown to the wind. Perhaps the same could be said about media enterprises without profits. They will be very tough sells.

William Dunkerley is a media business analyst and consultant specializing in Russia and the former Soviet Union.