Lenin anniversary marked with renewed calls to empty his mausoleum 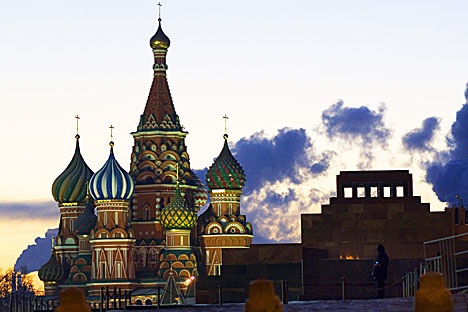 To mark the anniversary of his death, plans are once again afoot to move Lenin out of his Red Square mausoleum.

The latest proposal comes from the ruling United Russia party’s Vladimir Medin, though party leaders have distanced themselves from any official standpoint.

Medin argues that it is “blasphemous and satanic” to keep Lenin in his city centre resting place, and also has designs on shifting the funereal alley of Soviet heroes from their spots under the Kremlin walls.

He said that venerating a figure as controversial as Lenin in this way was “an extreme absurdity”, adding that it is wrong to have a cemetery which doubles as a venue for rock concerts and similar events.

It’s a familiar story, and the battle lines have been drawn up in predictable fashion. In the red corner, Communist leader Gennady Zyuganov dismissed the idea as “political provocation”.

And left-wing splinter group, the Communist Party of Leningrad Region (KPLO), was even more outspoken.

It’s ideologue, Sergei Ovanisyan, railed against the “tribal homegrown pygmies”, incapable of comprehending Lenin’s greatness, who demanded his eviction from the mausoleum.

But a Kremlin official told Vedomosti that there may be a gradual move towards reinterring Soviet heroes away from Red Square.

The establishment of a military memorial cemetery near the Moscow Region town of Mytishchi could, in due course, provide a permanent resting place for at least some of those under Kremlin wall.

And that would please Medin’s allies, such as Alexei Chesnakov, who described Lenin’s tomb as an “insulting and unacceptable pagan cult”.

Even if Vladimir Ilyich is eventually rehoused – an outcome which would also reflect his own reported wishes as relayed by his widow Nadezhda Krupskaya – the little red pyramid is set to remain.

Mikhail Fedotov, chairman of the presidential council for Human Rights, said that the building is a valuable work of 20th –centry architecture and should be preserved as a museum.

And even that prospect seems remote, according to Viktor Khrekov of the presidential property administration. He told Interfax that there have been no decisions and no discussion is planned at the moment.