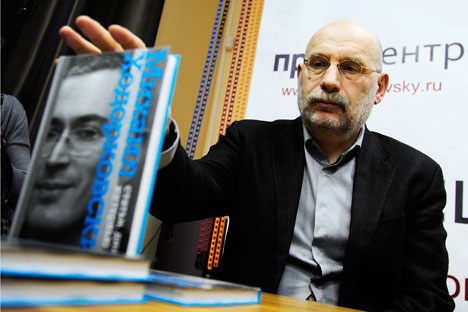 Russia's literary elite show their support for Mikhail Khodorkovsky by supporting his writings.
Less than a month after jailed Russian oligarch Mikhail Khodorkovsky was sentenced to remain in prison until 2017, a book of his writings and interviews has been launched in Moscow, at an event attended by some of Russia's top writers and human rights figures.

The book, titled “Mikhail Khodorkovsky: Articles. Dialogues. Interviews,” includes a series of essays which the former Yukos chairman wrote from prison for Russian publications about the future of the country, as well as interviews with leading contemporary writers such as Boris Akunin, Lyudmila Ulitskaya, and Boris Strugatsky.

Khodorkovsky, who was once Russia's wealthiest man, was sentenced to 14 years in prison last month together with his former business partner, Platon Lebedev, after both men were convicted of theft and money laundering. It was the second conviction of the pair. The new sentence was backdated to 2003, when Khodorkovsky was initially arrested -- meaning that he and Lebedev will stay in jail for another six years.

One of the much-hated oligarchs who made billions in the 1990s, Khodorkovky’s plight received little public sympathy in Russia after his first trial, but his writings from prison, backed by a well-organized publicity campaign and his second trial, widely seen as Kremlin retribution, has seen his support visibly increase, especially among writers and artists.
Akunin, author of the best-selling "Erast Fandorin" detective series, interviewed Khodorkovsky by mail for the Russian version of "Esquire" magazine. He says the fallen magnate’s fate appeals to him as an author.

“It is in some ways a classical story," Akunin says. "It is a story about what a hero is, what an antihero is, what is a model of decent behavior and what is a model of horrible behavior and how to behave in one or another situation. The longer it goes on, the more people understand this. It is not literature. It is life.”
Ulitskaya, whose correspondence with Khodorkovsky originally appeared in the journal "Znamya" and is reprinted in the book, says she had many disagreements with Khodorkosvky in their correspondence. But she notes she has been impressed with him and hopes to one day meet Khodorkovsky in person.

“It is a different person than the one who was arrested. There has been an unbelievable internal change during those years. The stature and depth of that person has increased in incomparable ways," Ulitskaya says. "I hope that there will be a time when we will sit and drink tea and discuss the problems of government, power, and the state and relations between individuals and the state.”

Ulitskaya previously described December 30, the day Khodorkovsky was sentenced in his second trial, as a “day of shame for the motherland.”

In the introduction to the book, broadcaster Leonid Parfyonov describes the Khodorkovsky case as historic and says that when he is released, it “will, as everyone understands, mean the end of an era.”

Parfyonov wrote that readers can see the evolution of Khodorkovsky in the articles. Akunin says Khodorkovsky has become a stronger writer since the former oligarch first wrote to him, and he predicts that some of Khodorkovsky's writings will be taught in schools in the future.

Khodrokovsky’s parents, former Prime Minister Mikhail Kasyanov, and film director Eldar Ryazanov were among those who attended the January 20 book launch. When asked why he came, Ryazanov told RFE/RL’s Russian Service he wanted to be "in the company of decent people.”

“A person who ends up in a situation like Khodorkovsky -- a break, a change in life, it always interests people," Rubis said. "In Soviet times, you were one person and in post-Soviet times, to put it crudely, you had everything. Now you have absolutely nothing. I think tracing that path through the example of Khodorkovsky is interesting for many people.”

The publisher says profits from the book will support a children’s home in the Moscow region.