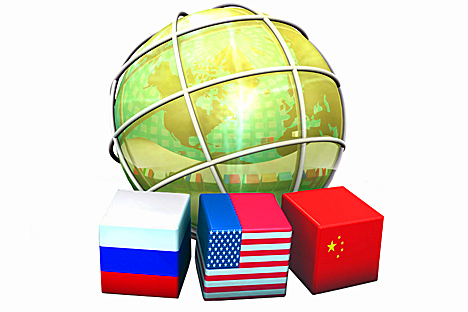 The recent state visit of Hu Jintao to Washington didn't register much reaction in Moscow, but the meetings could still provide Dmitry Medvedev with some food for thought.

A survey of Russian media over the past few days has revealed that folks in Moscow were paying little attention to Chinese President Hu Jintao’s visit to the United States.  This is understandable: Nothing that Hu and his U.S. counterpart, President Barack Obama, have said in public was of immediate relevance, much less concern, to Russia.  A faraway visit in a faraway country, so to speak.  And yet, a careful look at the Sino-American summit in Washington may give some insight into future developments in Russia’s relations with both China and the United States.

Over the past couple of years, relations between China and the U.S. have been deteriorating.  In addition to traditional irritants, such as trade and currency issues and U.S. arms sales to Taiwan, China stirred a lot of concerns in U.S. intelligence circles with a rapid progress in the military arena.  China’s recent high-profile spats with its neighbors and U.S. allies, Japan and South Korea, and Beijing’s bold claims of sovereignty over large parts of the South China Sea have further poisoned the atmosphere of the Sino-American dialogue.

With its Chinese plate seemingly full, the Obama administration nevertheless decided to focus the summit agenda on yet another issue: China’s human rights record, a topic that, according to many administration critics, was underplayed during the past two years.  So President Hu was treated to a series of lectures, by Obama himself and then by Congressional leaders, aimed at persuading him that only expansion of civil liberties in China (and revaluation of Chinese currency, of course) can guarantee China’s future economic development.

The importance of economic ties between China and the U.S. is well recognized by both sides, and this fact alone, even without accounting for President Hu’s trademark poise and politeness, could have prevented the Washington summit from sliding into an ugly shouting match.  Yet, as much as China depends on exports to the U.S. and U.S. foreign investments, it also needs energy to ensure its steady economic growth.

And that is where economic relations between China, the world’s largest energy consumer, and Russia, the world’s leading exporter of oil, come to the forefront.  Last fall, Hu and Russian President Dmitry Medvedev presided over the launch of a 625-mile oil pipeline from Eastern Siberia to China.  Although it accounts for only a tiny fraction of China’s total oil consumption, this pipeline has a benefit of providing a secure land delivery route – as compared to the bulk of China’s oil imports delivered by potentially vulnerable sea shipments from the Middle East.  This thought will undoubtedly cross President Hu’s mind the next time he discusses China’s oil needs with the Russian leadership.  And he can be very sure that the subject of China’s domestic politics will not be raised in response.

The newly renewed emphasis on human rights by the U.S. in its relations with China provides an unexpected opening for Russia, and Moscow would be wise to take full advantage of this opportunity.

At first glance, U.S.-Russia relations lack many complications that mar the interaction between Washington and Beijing.  Yet, as the much talked about “reset” is gradually losing its honeymoon appeal, and tough issues – such as further nuclear arms control negotiations or situation in the post-Soviet space – begin dominating the U.S.-Russia agenda, the Obama administration will likely begin raising the issue of human rights in Russia – as Washington always does when it has nothing to offer to its interlocutor (or when the White House wants to mollify its domestic critics).

What could be Moscow’s reaction to this potential development?  First, it should come up with a list of specific, positive, steps defining the “post-reset” stage in U.S.-Russia relations.  Second, Moscow should push back every time it is faced with spurious accusations of its domestic conduct.  To this end, President Medvedev could lift a line from President Hu’s response to his American critics: “China and the United States should respect each other’s choice of development path and each other’s core interests.”

Or Medvedev could ask his prime minister to help compose something more forceful.