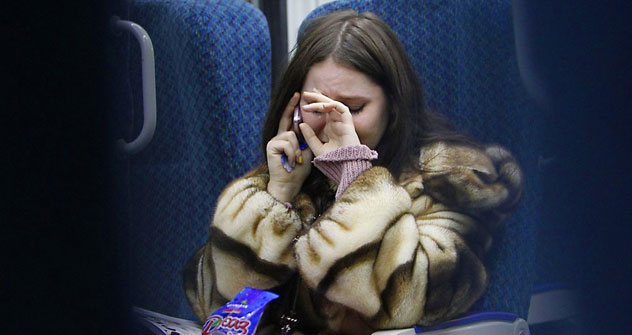 Time and time again, Russian leaders have vowed to track down and punish terrorists responsible for deadly bombings, yet after every attack, safety is hard to find and the real problem is ignored.

After this week’s deadly bombing at Moscow’s Domodedovo airport, Russian President Dmitry Medvedev ordered authorities to “bring the culprits to justice and destroy their organizations. ”And after last year’s bombing in the Moscow Metro, Medvedev vowed to “continue the operations against terrorists without hesitation, and to the very end.” Medvedev is trying to imitate the harsh tone of his mentor, Prime Minister Vladimir Putin, who famously promised in 1999 to “wipe the terrorists off of their toilets,” and recently said it was “a matter of honor for the security services to drag the terrorists from the bottom of the sewers into the light of God.” These are strong words, but they have produced week results.

After the airport attack, the police in Moscow announced additional security measures, but in practice they mean next to nothing. Shortly after the bombing, passengers inside Domodedovo, afraid of missing their flights, easily walked around screening devices. A metal detector located at the entrance to the airport is a show of security, but in reality it hasn’t worked in about six months. In the aftermath of the bombing, security was worse than ever, according to eyewitnesses. Arriving passengers wandered through the departures terminal. No branch of the security apparatus wanted to take responsibility for lax procedures at the airport, although former employees of the airport security service at Domodedovo told The Moscow News that cuts first in wages and later in personnel had damaged the ability of the service to provide adequate screening.

Classifying the bombing as a terrorist attack “means that someone responsible for security at Domodedovo or in the interior ministry of the Federal Security Service is going to be fired,” said Newsweek correspondent Anna Nemtsova, who was at the airport shortly following the attack. “Unfortunately, the lessons do not seem to be learned. There is still a lack of security in public places.”

Unable or unwilling to face the hard questions of what happened and why, politicians are left taking the hard line rhetorically, and the attacks keep coming. In fact, in the Caucasus itself, they happen every other day. The Muslim population of the problematic regions of Dagestan,
Ingushetia and Chechnya know all too well what the hard line in Russian politics means. Corruption and fear reigns in the North
Caucasus, where power resides in a complicated system of clan loyalties and corrupt political appointees. Moscow ships endless amounts of cash to keep things quiet, but the money never finds its way to the impoverished, unemployed population; it disappears in the deep pockets of regional officials. While many people can't even afford a car, the traffic police in Dagestan patrols the roads in Porsche Cayennes. The real terrorists walk free, and the local population pays the price. The disparities have caused an increase in local support for terrorism. Hours after the airport bombing, messages of support were posted on Russian extremist websites. Throughout the Caucasus, people have turned their heads away from the Kremlin. Among locals, rumors are rife that federal security representatives don’t even try to hunt down the real terrorists, they just “symbolically” blow up buildings; after all, if the real terrorists are found, the money from Moscow to fund security operations will stop.

The loneliest man in Russia may be Alexander Khloponin. The economist and businessman was appointed almost exactly a year ago as presidential envoy to the newly-created North Caucasus Federal District. Immediately after taking office, he embarked on a new route to improving the situation in the region by encouraging economic development and offering an alternative to whatever is being offered by fundamentalist Islam. Last summer, Khloponin announced a program to combat clan and ethnic conflict along with Islamic extremism starting with a series of priority economic development projects: constructing an oil refinery in Chechnya, redeveloping ports in Makhachkala and Derbent, along with the development of tourist infrastructure. But investment has been hard to come by, and in the crowded rhetoric of warlords, security service officials, military leaders and local political figures, Khloponin’s voice has gone unheard. “The approach of using jobs and economic development to halt terrorism does not seem to be working,” said Newsweek’s Nemtsova the day of the Domodedovo bombing. “There is a lot of frustration in society.”

After the airport attack, President Medvedev delayed his departure to the World Economic Forum in Davos, Switzerland, where he had intended to give a speech touting Russia as a safe place for investment – particularly encouraging foreign interest in the development of the North Caucasus as a sports resort. Russia still dreams of its Caucasus mountains as a tourist destination to rival the Swiss Alps. Every attack moves this dream further from reality.