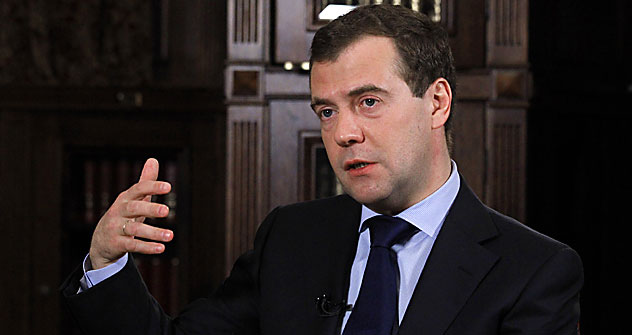 Despite the terrorist attack, which raised difficult questions about Russia as a safe country for investment, President Dmitry Medvedev headed to Davos to network, promote and brainstorm.

On the eve of his departure for the World Economic Forum in Davos President Dmitry Medvedev outlined to the Russian business daily Vedomosti what he expects from the annual event and what topics will dominate his agenda there.

Dmitry Medvedev: I apologize for the delay it was because of the recent events at Domodedovo. I just had a working meeting with the heads of law enforcement agencies, and the transportation minister. This was obviously a terrorist attack, planned in advance. They used the worst scenario possible.

Judging by the location and other indirect signs, the attack was well planned and aimed at killing as many people as possible. Unfortunately, in our country we have a system for this kind of work in place, because we know what terrorism is. Such things happen in other countries as well, and there are a number of procedures that need to be done here.

Also, basically all transportation hubs are on high alert. This causes inconvenience for people, because their luggage is searched thoroughly.

But it is a necessary measure. Sometimes we slack off here, whereas some countries are very diligent in this respect. Passengers from other countries complain, saying that this is humiliating. But as we can tell from our experience sometimes this plays a key part, becoming an issue of life and death.

Vedomosti: From my experience, I can say that in many airports the procedure of luggage checking is longer and a lot more serious than in our country.

D.M.: You are absolutely right. We can use Israel and the U.S. as examples. We need to be extra careful with everything related to transportation. After the events that took place some time ago, when planes flying out of airports, including Domodedovo, were attacked by terrorists, legislation was changed. It is a lot stricter now. But unfortunately our problem is that we don't always apply even the most important laws.

So I commissioned the Prosecutor General to investigate how Domodedovo applies this legislation. Everyone admits that Domodedovo is a good, new, modern airport, but what happened proves that there were violations of security measures. It is not that easy to bring in such a huge amount of explosives. Everyone who is in charge and makes decisions in the company, the airport’s management, must be punished. It was a terrorist attack, a tragedy. I hope that law enforcers will quickly establish the main lead and conduct an investigation.

Well, we met to talk about economics, let’s do that.

Vedomosti: This week you will take part in the World Economic Forum in Davos. It is the first time in the history of the forum that Russia will be represented at the top level. Why did you want to take part in the forum personally and what are you going to talk about in your address at the opening ceremony? Maybe some key ideas?

D.M.: Because of the recent events, my agenda for Davos will most likely be shortened, but the important issue remains the same. I made this decision to take part in the forum as the president of the Russian Federation, because I think that it is a very important international forum where we can address our position. We established a very good forum in St. Petersburg. I think it is very successful and well promoted.

But we still need to talk to our colleagues – leaders of countries and governments, businessmen – in other places. In this respect Davos is the most popular place. I first went there when I worked in the government, because the atmosphere at the forum was very good, informal, you don't even need to wear a tie. At the same time, you can easily run into a major or not-so-major businessman, a president or a prime minister, grab them by the sleeve and ask about things. It is important, because they have a good business atmosphere there.

As for my decision, I think Russia should be represented at these events by top-level leaders. For different reasons neither President Yeltsin, nor President Putin went to this forum during their presidencies. We need to fill this gap.

And we also have something to say. We are not going there to chat with people or even solve serious but individual problems on the sidelines.

Our task is to promote the knowledge of Russia's capacities, strengths and advantages both in the spheres of the economy and legislation by talking openly about them. But we also should be talking about our flaws and difficulties, about the unsolved issues.

I think that only such an open dialogue can help people understand the current state of things in Russia. And we are indeed expecting more investments, we are hoping for quick growth and recovery from the crisis, and we do have pre-conditions for this, therefore without jumping ahead to my future speech I'd like to say now that it will certainly address everyone who comes to the forum, on the one hand, but not only them – it will also address anyone interested in developing economic relations with Russia, in investing into Russia, in setting up joint ventures, in looking for new growth points, and ultimately in implementing together with us what we call modernization – and here I mean modernization of our country's economic and political systems.

These are the things I will talk about, but I will also address some global issues, as this is the nature of this forum, it's a global forum, and in general you just can't talk solely about Russia, as this might not be of interest to everyone. No doubt, Russia is an important player on the global market, but it doesn't all come to us only, and as it's become clear over recent years what really works is coordinated decisions worked out by groups of countries, such as by the G20.

In this respect, I'd like to make my speech interesting to other heads of state and representatives of business circles who will attend the forum, and thus this speech must address topics of general interest, such as the world we live in, what we are doing, what issues we have confronted over the last 10 years, and what are the outcomes we are taking with us into the second decade of the 21st century. And when I say “we,” I refer to all the states on our planet, all participants and contributors to the global economy.

Vedomosti: If we consider the issues of the last decade, then on the global scale the main issue has probably been the financial crisis that started in the United States and folded across the rest of the world, and as far as I'm aware the agenda of the Word Forum in Davos includes a relevant discussion and there is also a possibility that an even closer format of cooperation of the countries, aimed at addressing issues with such global impact can be established there. Could you possibly talk, perhaps briefly, about what Russia has to offer in terms of such cooperation?

D.M.: In general, global tools are a very complicated matter, because there are things you need to reach an agreement on and this is something I've talked about many times and would like to say again, I was quite a convinced skeptic on the subject of the global community's capability to influence any sort of global crisis, as there are too many different interests, too many different countries, each one with issues of its own. But the recent crisis changed my conviction

I’m convinced that our countries, though very different, are capable of coming to an agreement, of working out an economic policy on the planet's scale and of exerting influence over it, and among other things of making some unpleasant decisions – for example, the decision that changed the IMF and World Bank quotas was very favorable for developing countries, while it was not for developed economies, because the latter had to give away some of their share, and in general it's just hard to give away something that's yours. And Russia is also a part of this global process. We are offering our ideas. Some of them address the future of the international financial institutions and what is known as the financial world order, and some are very specific proposals: to set up new, speaking conventionally, Bretton Woods institutions – although that's a large area on its own.

There are also some quite specific initiatives that are still very important. I'll give you an example. The Louisiana oil spill incident raised the following concern – to what extent are the world community's interests protected in cases like this? On considering this, I came up with the idea of the global protection and risk insurance system for such incidents at sea, because this particular issue is not addressed by any of the international conventions.

There is the Safety of Life at Sea convention, a convention on environmental protection and on how to tackle oil spills, but there is no system that would reimburse for the damage.

It's a good thing – at least partially – that what happened to a large oil producer capable of paying off its debts and staying afloat despite this – although there are different opinions on this, and there was a risk – but what if it were a smaller business? What if it was a situation where the state was claiming reimbursement and the offender was refusing, if the company said, “No, we're not paying you.” What would they do then? While the damage is huge, it's of global impact. Therefore we need to consider establishing certain economic institutions that would allow the prevention of, and in some cases eliminating, the damage caused by a global accident.

How can this be achieved? I think there are a few ways to do it, including by setting up relevant funds, and these might be set up by the world's largest oil and gas producing companies. That's one option.

Another option would be to think through a special risk insurance system – this is quite complicated as such risks can't be covered either by any insurer or any re-insurer. But that's where responsibility of all the global community and all the countries lie. This is the initiative I have proposed, and it's being currently reviewed quite closely by the G20, and that's an example of our participation in global affairs—just one example.