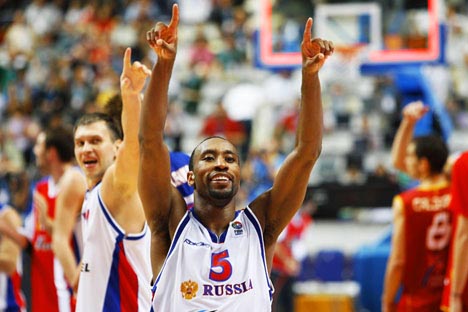 For the first time, Russia has begun to hand out passports to international athletes with Olympic potential. Yet even sports officials give Russia’s recruitment drive mixed reviews.

Long known as the ultimate exporter of athletic talent, Russia is finally inviting foreigners to help replenish what has amounted to a serious talent drain. With the 2014 Winter Olympics in Sochi drawing closer, and the dark specter of losses at the 2010 Winter Olympics heavy on its shoulders, the country is changing its attitude toward foreign athletes.

As sports officials begin to realize that naturalization has its benefits, more athletes are coming to Russia, and some are finding success. But the new strategy is getting mixed reviews inside Russia and abroad.

American athletes John Robert Holden and Rebecca Hammon, the most famous naturalized Olympic hopefuls, have become leaders of their respective Russian basketball teams. Figure skater Yuko Kawaguchi, a native of Japan and now a fluent Russian speaker, has become a national celebrity after representing Russia at the Vancouver Olympic Games.

Becoming a naturalized Russian in order to compete here is fulfilling, the athletes say, but not without heartache. Athletes face a steep learning curve in language and culture outside their Olympic training. Even more taxing sometimes is the barrage of criticism from all sides.

“Most of my friends and family were surprised I was accepted by the Russians to receive a passport and play for the national team. People like the press and media were very critical of me. But hey, that is life and with a lot of great opportunities there is a lot of good and bad to deal with,” Holden said of his decision to represent Russia in the Olympics.

Holden said he started his life here with his own stereotypes: He thought that Russia was a cold place with cold people. “Like most Americans, I thought Russia would be like the movie Rocky,” Holden told Russia Now of his move to Moscow in 2003.

A native of Pittsburgh, Holden was picked up by several European basketball teams after failing to make the NBA. Eventually, he settled on CSKA Moscow, which reportedly pays him $3.5 million annually, and acquired Russian citizenship for the opportunity to play on the national team. Holden went on to lead CSKA to two Euroleague championships, and Russia’s national team to the European Championship in 2007 with a last-minute basket against Spain.

I’m No Spy, I Just Want to Play Olympic Basketball

Hammon, who plays on the women’s national basketball team, came to Russia to become an Olympic champion. After eight years playing for American teams, she failed to get selected to play for Team USA. She received a lot of backlash in the United States for her decision. U.S. women’s team Head Coach Anne Donovan even called Hammon “unpatriotic” and “a traitor.”

“Oh, the things I had to hear back home! I was almost accused of treason. I explained to everybody at home: Guys, I’m not a spy, I just want to play Olympic basketball. And if I were selected for the U.S. national team, I would’ve given it my all for America,” Hammon said in an interview to Sovetsky Sport.

But it’s not all about money and fame. Kawaguchi came to St. Petersburg to train under the famous coach Tamara Moskvina. Kawaguchi was so impressed by the performance of Russian pair Elena Berezhnaya and Anton Sikharulidze at the 1998 Nagano Winter Olympics, according to Reuters, that she wrote to Moskvina asking her to coach her too. Soon afterward, she was granted Russian citizenship and started competing for the national team.

Back home, Kawaguchi’s decision wasn’t exactly welcome either. “I read a lot of spiteful comments on the web,” she told Reuters. “Those who don’t understand the laws of international sports even called me a traitor, but I’m not offended. Those who know how the sport works understand that I’m not a traitor. I still consider myself Japanese. I decided to compete for Russia because I didn’t have a [good enough] partner in Japan.”

Alexei Kravtsov, the Head of Russia’s Speed Skating Federation, said that foreign athletes are invited to join short-track teams for the same reason. “We are currently naturalizing two Korean women for our short-track team, 17-year old Lee Mi-Yeon and the 16-year old Star Shin. We are not doing this for them just to win medals in Sochi under the Russian flag before sending them home. We want talented athletes from a country where short track is a national sport to become a benchmark for our girls in day-to-day training, to help them heighten their own level.”

Russia’s Olympic Committee President and Deputy Prime Minister Alexander Zhukov also believes there’s nothing wrong with case-by-case naturalization of foreign athletes. “There will be instances of naturalized foreign athletes competing for Russia, and this is nothing to be ashamed of. But I don’t think this should become the norm,” Zhukov told RN.

But not all Moscow officials are on the same team. “In global terms, naturalization of foreigners to compete for a national team is the wrong choice,” Sports Minister Vitaly Mutko told journalists at a press conference.

Yet handing out passports to foreign athletes has long been the norm in some other countries; for example, 22 percent of Germany’s national football team players are not native Germans. And some sports officials believe a transfusion of foreign athletes will improve Russia’s lagging athletics:

“Foreigners are being naturalized not only for Russia’s chances to perform well in Sochi, but also for creating a good, competitive environment for Russian athletes,” said Russia’s Olympic Committee press-service chief Sergei Averyanov. “When they train together with stronger opponents, their own skill level will inevitably increase.”