Somasundaram Subramanian: “To succeed, work hard and believe in yourself” 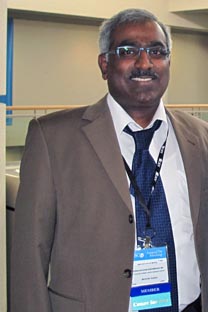 As the ancient Indian saying goes, “the world is tired of big words”. The oncologist Somasundaram Subramanian, who has been making a successful medical career for himself in Russia, believes actions are louder than words. He first came at 17 years of age to the USSR, where he proceeded to obtain his medical degree. After the collapse of the Soviet Union, he co-founded the Eurasian Oncology Program, an initiative of great importance that brings together oncologists from 40 different European and Asian countries. In an interview with RIR, Somasundaram talked about his life in Russia.

Somasundaram was born in Coimbatore, also known as the Manchester of Southern India, and moved to Madurai with his parents when he was young. He considers Tamil to be his native language but is also fluent in Hindi. He has also learned English and, subsequently, Russian.

Who are your parents?

My father is a doctor, a pathomorphologist. He used to be a professor at the medical institute. My mother, meanwhile, is an economist. They are both semi-retired now: they own a diagnostics centre. I am the middle child in the family; I also have two sisters. When we were growing up, mother didn’t have any time to work, so she stayed at home and raised us. She went back to work only after she finished raising us and putting us through school.

How did you end up coming to Russia to study?

After graduating from high school, I took and passed my college entrance exams. But after I received my admissions letter, my father strictly prohibited me from traveling to the state where my college was located because it was known to be a very dangerous place. This got me to start gathering information on universities abroad, including Soviet ones. I was soon invited to Delhi to meet representatives from the Soviet State Committee on Higher Education and the Ministry of Health. They were asking me some general questions and I would answer them. Then, miraculously, I was unexpectedly told that I… had been admitted: “Get your passport ready. You have been accepted to the Moscow State Dental Institute.”

Did you think well of the USSR?

Yes, as a child I saw the Soviet Union in a very positive light. As I learned later, many of my peers in the USSR felt the same way about India. Our countries were so close politically that I felt almost like a Soviet citizen. I used to buy the magazine “The Soviet Union” all the time and was an avid reader of Soviet history and science books.

Did you speak any Russian when you first came to the USSR?

No, I didn’t know a word, or a letter for that matter. When I came to the Soviet Union in October 1989, I was sent to Vinnytsia (a town in what is now Western Ukraine) to learn the language, and ending up spending almost two years there. I came back to Moscow in the summer of 1991 at the time when the collapse of the USSR had already begun. Incidentally, in 1995 I became the first foreign student to take part in the National Young Scientists Competition and to be awarded a medal from the Russian Academy of Medical Sciences. To make a long story short, it was here, in the capital of post-Soviet Russia, that I graduated from what is now the Moscow State University of Medicine and Dentistry.

And that’s where you stayed to work in your profession…

I am primarily a cancer surgeon, but I have more than one profession. I do many other things apart from surgery, such as chemical research (testing new drugs) and organisational activities. I founded the Eurasian Federation of Oncology to bring together eastern and western specialists in this field. The Eurasian Oncology Program, where I am the Executive Director, cooperates with people from more than 40 countries. We work with many former Soviet republics, China, India, Japan and countries all over Europe. We are making a lot of serious progress, and I’m confident that before long we will achieve a lot.

You must have had some bumps in the road when you were just starting out in your career?

Twenty years ago, when I was just beginning my work at the Oncology Center, many of my colleagues did not trust me; they considered things that I said to be ridiculous and my plans to be incompatible with Russia. Fast forward to today, and you won’t hear a peep out of these same people.

I have a very wide circle of people I am in contact with, in medicine as well as in politics. As a matter of fact, I’m the only foreigner who is a member of the State Duma’s Anti-Tobacco Expert Council. At work I obviously often talk to many Russian specialists and scientists. One outstanding example is Mikhail Davydov, the General Director of the N.N. Blokhin Russian Cancer Research Center, President of the Russian Academy of Natural Sciences and member of the Russian Academy of Sciences. He is also in charge of the Eurasian Oncology Program.

Do your parents visit you in Russia?

Yes, they have visited many times. We go sightseeing in Moscow, take tours of the Kremlin, Christ the Savior Cathedral, the Diamond Fund… Sometimes we even travel to St Petersburg to visit the Winter Palace and Peterhof…

Do they ask you to come back home?

They tried to at first, but then realised that I am in high demand here in Russia, and I have many acquaintances and business ties… Once my parents visited our oncology centre and met with my numerous colleagues and friends. At the end of the day, my mother said: “Soma, any mother wants for her soon to be comfortable and to enjoy what he does. It doesn’t mean he must stay by his mother’s side all the time, especially since there are many people here who know you and like you; you’re successful and work at such an amazing medical centre…”

Where do you like to relax in Moscow in your free time?

In the summertime I like to take an occasional cruise down the Moskva River. In the past, particularly when I was a student, I liked to go for a walk along Old Arbat avenue or stop by Dom Knigi book store. I also enjoyed dropping in at the Praga restaurant’s bakery and getting a bite of their Praga cake or of another, no less delicious milk soufflé cake called Ptichye Moloko. These were two popular Soviet delicacies at the time. I also never passed up the chance to order the restaurant’s Chicken Kiev, their hands down signature dish. I liked to shop at the Novoarbatsky grocery store and the Irish House on New Arbat street. Since then I haven’t been to these places for fifteen years. What’s more, I have stopped shopping altogether; my life has changed that much.

There’s a Russian proverb that says “he who laughs best laughs last.” What Indian proverb would you say describes the Russian reality best?

As the Buddha said, other people’s perception of us is the result of our thoughts. This aphorism has deep philosophical meaning: we want to be someone we aren’t. Our aspirations are reflections of our thoughts, and further reflections become reality. That’s why in this life, you need to work hard and believe in yourself to succeed.