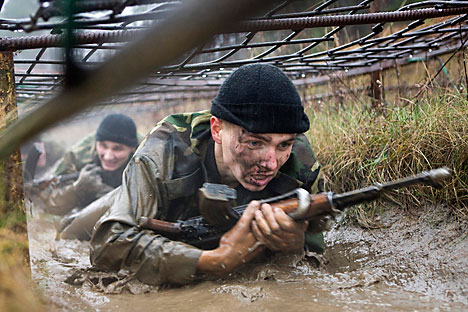 A Russian woman halts a galloping horse and enters a burning building. This is not just an episode from the classic poetry of Nikolai Nekrasov, which Russian children read at school – this is a reality of life. Russian women are intelligent, courageous, ambitious, determined, independent and sincere.

They are not required to do military service and therefore Russian women have no need for cunning, deception or avoidanced they are not forced to forget everything they learned at school, and pare down their intellect and their needs. At least to some extent, Russian girls are able to decide their own fate. Young men in Russia do not have a choice. The Russian General Staff  thinks that compulsory military service for young men, which is currently called “spring” service but actually lasts from the beginning of April to the middle of July, should be extended to Aug. 31.

In Russia, children sometimes start school at age six, but most begin their education at seven. They are at school for 11 years. The army recruits young men at the age of 18. Figures show that it becomes impossible for most young men to continue their education after school. First, they have to do their time in the army.

So young men have two options: Either they join the army in the knowledge that after they have completed their service they will have forgotten much of what they learned at school, and that no one is going to take this into account when they apply for higher education, or they can lie, deceive, wriggle out, escape, bribe their way out, plead with the management at the recruitment office – do everything in their power for the chance to settle down and study.

And this is only half the problem. Today’s Russian army does more than just force young people to forget the peaceful pursuit of knowledge; it drums aggression, mendacity and cruelty into young minds. It is often not possible to survive military service by any other means. In plain terms, Russian youth who happen to have been born at the wrong time are forced to choose: Either they resort to deception or they relinquish their moral integrity. It is an impossible choice.

And it has to be said that more and more young men in Russia are choosing deception. The number of people avoiding military service has reached record levels. And in this way, young people are probably choosing the lesser of two evils. But on the other hand it is hardly a good thing to start adult life with deceit and a flagrant disrespect for the authority of the state.

I would like Russia to have a strong professional army, so that a strong Russia can emerge. I think this would benefit not only Russia, but the whole continent. And when half of the young adult population learn either to use cunning to avoid their duties or to behave in an aggressive or cruel manner the country cannot be strong, and it cannot be stable.

By refusing to recruit a professional army, and by preserving and even expanding the monstrous system of military conscription, Russia is destroying the moral fiber of its men and is continuing to rely on its women. We, the women of Russia, have a tradition of being brave and capable. But we cannot cope alone.