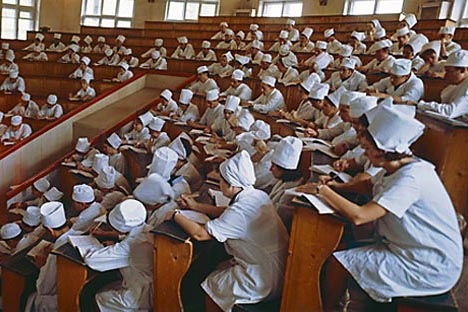 “I used to be very naïve about Russia before I came here to study. When I was little, I loved reading Russian fairy tales in English. I was under the impression that Russia was this snowy wonderland of a place, abound with frozen lakes and people ice skating. Overall, I thought it was this snowy white fairy tale. Later, during the perestroika years, I started finding out from the news that, just like any other country, the USSR had its fair share of problems. But anyway, having lived in Russia, I can say that it is a wonderful country; such an interesting mix of Europe and Asia. I really value the opportunity to get to know the culture”, said Dinesh Chakraborty, a sixth-year student at I.M. Sechenov First Moscow State Medical University.

The USSR used to host the second-most amount of international students in the world; today, Russia is only 9th, or just 2%, overall. The United States is still leading the way (around 20%); Canada, Spain, Singapore and Taiwan are swiftly boosting their numbers as well.

The statistics, however, are improving: the last few years have seen the number of Russia’s international university student body grow by 10%, exceeding 70,000, not to mention another 40,000 part-time students.

Meanwhile, Russia has a lot to offer: its schools of mathematics and applied sciences rank extremely well worldwide. Just look at the number of Russian professors working at American universities. Along with mathematicians and IT specialists, Russian graduates of medical schools are rightly sought after.

“The demand for Russian university education continues to grow. Satisfying the public’s demands for alternative energy, nanotechnology and biotechnology, genetic engineering, space research and new materials will require the relevant background knowledge, including in areas where these disciplines cross each other’s path”, says Boris Derevyagin, Head of the Analytics Department at the Russian Rectors’ Union. “Russia’s educational model is the only one in the world offering both fundamental knowledge and practical research training.”

Value for the money

The main factors that influence international students when choosing a university are the language of instruction, the country's international standing, the prestige of its universities, tuition fees, room and board, transfer requirements, etc.

Russia, however, does have an advantage when it comes to medical school.

Russian universities, in comparison, lack sticker shock. For instance, a foundation course at The Peoples' Friendship University of Russia (PFUR) in Moscow costs $4,000. The standard annual tuition is $5,950 for a course in general medicine, $6,150 for a dental course and $4,500 for a course in pharmaceutical medicine.

Artyom Markaryan, Rector of International Activities and Postgraduate Studies at I.M. Sechenov First Moscow State Medical University, says that a foundation course at their university costs $2,300. Standard course fees range from $3,250 to $5,500 per annum. The least expensive course is in pharmaceuticals, followed by general medicine and dentistry, the last of which is traditionally the most expensive degree.

Expense was the main reason Dinesh chose to attend a university abroad. He says that it would have been much more expensive to study in India.

Most Indians pay tuition in Russia, but getting a free ride is not out of the question. Russia allocates a few state-financed spots at universities each year. This, however, is something available only to the cream of the crop, i.e. secondary school graduates with the best grades. This year 12 Indians received Russian university scholarships.

Dinesh Chakraborty says that entrance exams proved to be easier than he had expected: 40 minutes were all he needed to complete his assignments. “Many of my classmates said that they had found the exams difficult, but I blew through everything, perhaps thanks to having studied chemistry, biology and physics very hard while in secondary school”, notes Dinesh.

Exams in these subjects are taken as part of the admissions process at medical schools. Physics is the only subject you do not have to take an exam on at some universities. A Russian language exam, however, is mandatory for everyone.

If a university offers courses in English, the costs run $1,000 per annum more, but, on the other hand, you can skip your first year of foundation courses. This was the option Dinesh chose.

Foundation courses are intended mainly for international students wishing to learn Russian. A year of intensive studies normally involves 720-970 hours of class. There are no traditional entrance exams for foundation courses. The most important admissions criterion is having a high grade-point average in secondary school. For instance, Gennady Sokolov, the Vice-Rector for International Cooperation Issues at PFUR, says that in order to be admitted to the Department of Medicine, the passing score for specific subjects such as chemistry, biology and physics is 70 out of 100. Having passed, the student is then invited for an interview, which does not tend to be a problem for anyone: it mainly helps professors group applicants in accordance with their level of proficiency. PFUR operates at three levels: strong, medium and weak. Depending on their proficiency level, students are assigned different workloads in order to have a more or less equal chance of being admitted to the university when they have to take entrance exams the following year.

Students choosing English as their language of instruction are not exempt from studying Russian. They have to take a Russian language course starting the very first year.

Once he completes his general medicine degree, Chakraborty is planning to specialise in public healthcare. “This is a new major and involves a lot of administrative work. It does, however, draw on concrete knowledge in practical disciplines.”

Russian universities offer international students three main disciplines. A degree in pharmaceuticals can take 5 years. The degree for this course can feature such majors as pharmaceutics or medicinal production technology.

The general medicine course takes 6 years. General practitioner’s training is followed by a clinical internship and further clinical traineeship (1 year and 2 years, respectively) that allow students to specialise in their chosen field. Internships are normally suitable for specialising in the most popular fields, such as general medicine, surgery, paediatrics, obstetrics and gynaecology. A further clinical traineeship allows students to access a wider range of fields (featuring over 100 majors) including the so-called “elite” professions such as cardiovascular and maxillofacial surgery, as well as psychiatry.

The dentistry course is completed over 5 years. Specialist training, for instance, in periodontology also follows this general degree course.

Incidentally, the Russian and Indian medical training systems not lining up with each other is the main reason why the flow of Indian students to Russian universities started ebbing in the 1990s and the beginning of the 21st century. Experts believe that serious discrepancies between the two systems caused this sharp drop in numbers. In India, general medical training and a bachelor’s degree (Bachelor of Medicine or Bachelor of Surgery) can be obtained in 5 years. The Doctor of Medicine title comes with a degree that takes another three years to complete. As was already noted above, a Russian university course in general medicine takes 6 years and gives you a  MD degree, but the course involves many more disciplines and academic hours.

Following a compromise reached by both countries’ ministries of education, Russian universities are expecting an increase in the number of Indian students. Markaryan notes that many universities are now actively promoting their services abroad.

Russian universities’ popularity among Indians hinges largely on word-of-mouth that alumni spread. Dinesh has mixed feelings about the education system in Russia: “Indeed, the theory courses offered are very high in quality, particularly for such disciplines as anatomy, surgery and ophthalmology; the departments have modern equipment. It seems to me, though, that we do not get enough hands-on training.”

Practical training is normally carried out at the hospital: students start learning the ABCs of working with patients during their very first years of university. At first, this involves the not-so-pleasant work of being a hospital attendant. But every doctor has to be “educated by adversity”. The 3rd year involves feldsher (assistant to a medical doctor) training, followed by years 4, 5 and 6 spent almost entirely at clinics, where students learn to make decisions in more serious circumstances under the supervision of their advisors, who are at the same time practicing doctors. Interns and trainees are said to almost “live” at the hospital while honing their skills in their chosen field.

Still, Chakraborty admits that the language barrier often makes hospital work a tall task for international students: “Despite their being plenty of hospital training, there is not enough direct contact with the patients, particularly if we compare us to Russian students. The language is the main challenge. If we knew Russian as fluently as the Russians, I don’t think we would be facing this problem.”

Kishore Repaswal faced the same challenge 10 years ago. In 2003, he graduated from PFUR after completing his traineeship; he got his doctorate in 2004. He is now a neurologist at the medical centre of the Main Administration for Service to the Diplomatic Corps under the Ministry of Foreign Affairs of the Russian Federation. Here is what he remembers about his studies: “Our practical training was provided at Hospital No. 31. It was very interesting, but, unfortunately, patient contact was a struggle. Sometimes we just could not understand each other. That’s when our Russian professors would come to the rescue. I personally can say that I was trying to get as much out of my studies as possible.” Having finished his education, Repaswal went back to India and worked for 2 years. After that, he found himself in Russia once again: “I like the climate. I certainly admire the Russian culture. I have a lot of doctor friends, which is why it wasn’t difficult to find a job here. I live in Moscow with my wife and 6-year-old daughter. I have to admit, though, that we are planning to go back to India in the future.”

Once they return to India, medical doctors fresh out of school have to get their qualifications verified by the Medical Council of India, i.e. take qualifying examinations. This certainly is not something graduates’ are pleased with, but Indian law mandates it for recognising international qualifications.

Chakraborty would like to return home. Although this is still at least three years away, he is sure that he will miss Russia and intends to maintain all the contacts that he has made while living here: “When I started speaking some Russian and mixing in with Russians, I discovered a lot of wonderful people. I often visit them at their flats and really consider them my friends. I would like to preserve these relationships. When I am back in India, I would be happy to have my Russian friends visit me. Then I would be able to show them how Indians really live.”

If you live frugally, you can get by on $400-500 per month even in Moscow. This includes food, mobile phone bills, transport and everyday expenses. Food at student canteens is not cheap but it is certainly much less expensive than at city cafes. The cost of a proper meal is about 150-200 roubles ($6-7).

The Russian university academic year has two semesters, 18 weeks each (1 September to 25 January and mid-February to the end of July with winter and summer holidays in between).