Russia prepares to add an amphibious assault ship to its arsenal 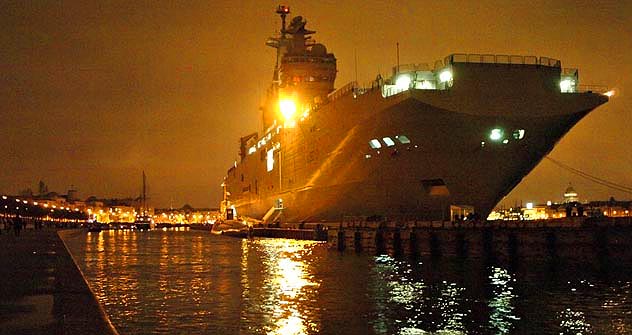 A tender has been completed for the construction of a sea-based helicopter carrier, but to what purpose?

At the end of last year, the winner of a tender for supplying an amphibious assault ship (LHD) to Russia was announced in Moscow. As experts predicted, the choice fell on the French helicopter carrier Mistral.

Vessels of this type are generally known as force projection ships and are used in local conflicts. Bids for supplying one of them were requested as early as Nov. 15 and Russian Defense Minister Anatoly Serdyukov said that several bids – some more detailed than others – from companies wishing to sell an LHD of this type to Russia, had been received. While he did not name the other bidders, the reported alternatives to the French tender proposal were the Juan Carlos of Spain and the South Korean "Dokdo." The winner, nevertheless, had been known all along: Russian President Dmitry Medvedev had reportedly promised French President Nicolas Sarkozy, to buy the Mistral. The Russian defense budget for 2011 has already allocated 720 million euros and 650 million euros for the purchase of the two helicopter carriers.

Russia will buy only two LHDs from France as opposed to four, as was initially suggested. They will be mainly built at the Saint-Nazaire shipyard by the company STX-France and will be based with the Pacific Fleet, confirmed Serdyukov. This will require additional strengthening of the ship's body with extra steel plate in order to adapt the Mistral, a ship built to operate in warm southern waters, to the extremely cold and icy conditions of the Northern Pacific. Moreover, the helicopter carrier's deck will have to be slightly modernized and raised over the hangar.

The truth is that the Russian navy intends to use the Russian Kamov and Mil helicopters rather than French helicopters. They are a meter taller than French choppers and therefore, the flight deck will have to be reinforced and raised in order for the aircraft hangars to be extended. The aircraft carrier's arsenal will also have to be reinforced. The Russian navy believe that the ship is "too feebly" armed: two short-range surface-to-air missile launchers, two 30-millimeter anti-aircraft guns and four heavy-caliber machine guns. As a result, the ship needs a heavy escort that the Russian fleet is not yet in a position to provide. This is another issue that needs to be dealt with imminently, which means reworking the project design estimates. Russia’s Rosoboronexport is currently negotiating the cost of various transactions with France’s DCNS and will only sign the helicopter carrier purchase agreement once all details have been clarified.

Another matter is the delivery of electronic equipment and the ship’s control systems. The Chief of the Russian General Staff, Army Gen. Nikolai Makarov, said that Russia needs three Mistral to be delivered with all the pre-installed equipment except for the NATO operating center communication codes, which, experts believe, are highly classified. How Brussels will react, however, is the big question. Although during a visit to Moscow French Prime Minister François Fillion said that the issue had been resolved, according to Pierre Legros, director of the French state-controlled naval company DCNS, the LHD built for Russia will be slightly different from the French prototype. Legros did not disclose any further details.

This lack of disclosure leaves open the question as to whether the French are willing to fully equip the ship with all standard electronic devices, including a naval tactical data system, communications and navigation systems, and weapons and machinery control systems. The delay in signing the contract may be caused by the issue remaining unresolved for the time being.

Finally, it is worth noting that Russian experts still do not have a clear and firm view as to why Russia needs this Mistral ship in the first place. Opponents of the agreement claim that Russia’s military doctrine does not refer to any expeditionary missions that its navy would need to accomplish using a ship that is, in effect, built for such a purpose. Neither is Russia planning to launch any assaults on any other countries, especially in the Far East. It would certainly be useful to have the technology and gain the experience that come with building such LHDs and that Russia has lost over the past few years, but is it really worth the cost? It is true, as the agreement’s proponents state, that it is expected to be in commission for 10–15 years. A lot can happen during this time. The military doctrine may change, among other things. And then, there is the need to fight pirates; the Mistral is a perfect choice for that.

In order to decide who wins the debate, the Mistral must be commissioned. There needs to be at least one of these ships available to each fleet together with escort vessels. It is only when we have seen them in action that the truth will be revealed.