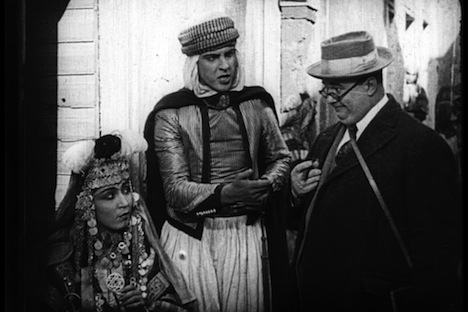 In the 1924 silent film, “The Arab,” a charismatic sheik woos an adventurous ingénue traveling with a group of hapless American tourists.  Part travelogue, part love story, the film does offer up implicit commentary. Part of their tour includes a visit to the resident Protestant missionary, whose words are drowned out by the call to prayer coming from the village minaret.

American film historians had never seen this film until recently. Eighty percent of silent films made during the silver age of cinema from the 1890s to the 1930s did not survive in the United States, leaving archivists with bits and pieces of nitrate reels to try and capture and imagine an entire era.

But some films did survive elsewhere. A copy of the film was one of ten films repatriated, a recent gift from Russia.

Professor A. P. Vershinin, General Director of the Boris Yeltsin Presidential Library, gave a gift of digital copies of ten films to Dr. James H. Billington and the Library of Congress in late 2010.  The gift also included a lost version of “Carmen,” sung by Geraldine Ferrar of the Metropolitan Opera.

Today, film historians are beginning the painstaking process of restoring these films in a 400,000-square-foot concrete fortress in Culpepper County Virginia.

“No one has seen these films in 5O years or more,” said Patrick Loughney, who heads the Packard Campus for Audio Visual Conservation and leads the Library’s effort to preserve films from the 20th century. “The very first step is to recover the films,” he said. “Restoring the films is another process.” The facility, which includes an erstwhile Federal Reserve bunker in the case of nuclear attack, was built in 2007. One hundred and twenty staff members work on preserving millions of feet of film from the last century.

The first step in preserving the film “The Arab” will be to “dis-assemble the Russian film to try to recreate the original film,” according to Loughney.  He is trying to find out if there are any synopses to work from as they try to translate the Russian back to English again. This will be done by a specialist who is familiar with the Paramount pictures of the day.

The main characters in “The Arab” have the stock magnetism associated with silent films—the dashing sheik, the knowing prostitute, the ugly American businessman. Yet some of the cinematography is breathtaking, from North African landscapes to village footage including women in the background wearing traditional Muslim dress, walking the sandy streets and stone tenements; the movie was filmed on location, probably in Algiers.

As the Soviet Union opened in the 1980s, historians began exchanging letters, and found that film archives there held many significant silent films long lost to American culture. Dr. James H. Billington, the Russian scholar and Librarian of Congress, was then teaching a Russian cinema course at Princeton University, exchanged lists with Russian scholars. Loughney is traveling to Russia this month to offer gifts in return, mostly historical American films about Russia. “One thing the Russians are very interested in is [footage] with Rudolph Nureyev and other émigré artists performing in the United States.”

In an interview during his visit to Washington, D.C. last year, Prof. Vershinin said that his staff is developing a Russians in America history project for their digital library.

“We hope to find out more about how Russians came of age in America,“ he said at the time.

Of all the closed materials previously inaccessible to Americans from Russia, the silent films are the most surprising bounty from the new, open exchange between the Library of Congress and the Boris N. Yeltsin Presidential library. “We’ve been letting our cultural legacy rot ourselves,” said Loughney. “Our story will go away if it is not preserved.”