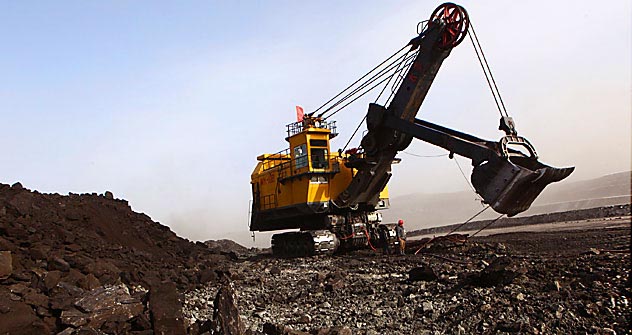 Mongolia, while poor and undeveloped, sits on vast quantities of untapped mineral wealth and analysts say it could be one of the fastest growing economies of the next decade.

Resource-hungry Asian states, including a Korean-led consortium that has Russian Railways as a member, are locking horns with steelmaker ArcelorMittal and miner Vale to develop the world's largest untapped coking coal deposit in Mongolia, scrambling for raw materials to produce steel.

China, Japan and South Korea are scouring the world from Africa, India, Australia and South America and snapping up iron ore and coking coal assets to diversify from heavyweight suppliers such as BHP Billiton and Rio Tinto.

Asian private and state-linked firms are among the 15 bidders vying for Tavan Tolgoi coking coal project, along with the world's top steelmaker ArcelorMittal and the top iron ore miner Vale of Brazil, according to a source with direct knowledge of the matter.

Mongolia, while poor and undeveloped, sits on vast quantities of untapped mineral wealth and analysts say it could be one of the fastest growing economies of the next decade.

The country's fledgling democratic government plans to keep ownership of the mine, estimated to house a total 5 billion tons of coal reserves, and give strategic investors a chance to develop its western block on a contract basis.

Over 20 investment banks will this month submit written proposals for the privatization of Tavan Tolgoi, which could value it at up to $8 billion, The Independent reported Sunday.

"It is the biggest undeveloped coking coal mine in the world, it is strategically important and that's why you see so many interested parties," said Carol Cao, an analyst with Macquarie in Hong Kong.

State-run Korea Resources said its consortium is formed by nine Korean firms, two Russian firms and four Japanese companies to develop the Tsankhi block, which is estimated to have 1.2 billion tons of coal reserves.

"Mongolia has rich untapped reserves, and the block in the auction is very attractive as it is one of the few large-sized coal mines in the world left undeveloped," Korea Resources said in a statement.

Steelmakers across Asia have been scrambling to secure new supply channels after devastating floods hit Queensland — the heart of Australia's coal mining sector — in December and January.

The Mongolian government is likely to decide on preferred bidders in mid-February, after the Lunar New Year holiday, which starts this week, Korea Resources said.

But the auction, which closed on Monday after two weeks of delay, faces uncertainty as Mongolia has struggled to develop a consistent strategy when it comes to overseas companies buying into national assets.

It has long frustrated the global resources industry by dragging its feet on investment decisions. The government, hobbled by indecision and bureaucratic infighting, took years to conclude the agreement to develop the Oyu Tolgoi copper and gold project.

An initial 2009 bidding auction for the Tavan Tolgoi coal project attracted consortia from South Korea, Japan and Russia as well as mining giants such as BHP, Vale, India's Jindal, and China Shenhua Energy.

But the government abruptly announced the auction would be cancelled early last year and said the state would maintain control and foreign firms could bid for licenses to develop and run the mine.

A top executive at a Japanese trading firm said BHP, which previously expressed interest in the project, had pulled out.

Sources told Reuters on Monday that competing Mitsui is leading a Japanese consortium, which has partnered with China's state-run Shenhua Group.

Some investors said winning the deal could add luster to the winner's stock price over the long-term.