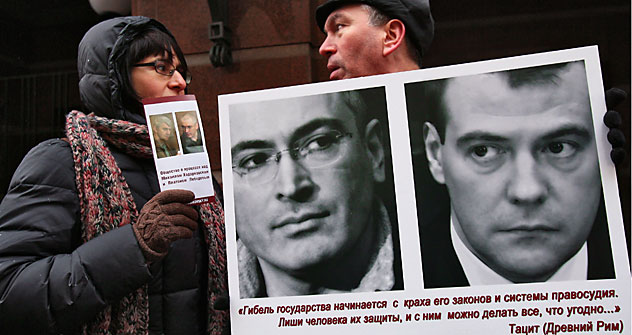 In a letter published in Russian daily Vedomosti, the jailed former oligarch appeals to the president to help fix the system.

Jailed former Yukos CEO Mikhail Khodorkovsky has appealed in an open letter to Russian President Dmitry Medvedev for justice to be restored in Russia and accused the court of “legal nihilism.”

“I find it necessary to appeal personally to the president of Russia in connection with the disgraceful verdict of the court,” Khodorkovsky said in the letter, published by Russian daily Vedomosti.

On Dec. 27, 2010, Khodorkovsky and his business partner Platon Lebedev were each sentenced to 13-and-a-half years in prison in a second ruling against them. They were found of organizing a criminal group in the oil business, embezzling 218 million tons of oil from Yukos’ subsidiary companies and money laundering.

Appealing to the president, Khodorkovsky stressed that he is not suggesting putting pressure on judges. “I suggest saving [the court] from pressure, from that humiliating role of an appendage of the repressive system which manipulates it,” he wrote. The president’s duty under the constitution is to provide independence of the courts, “rather than just declare it.”

Khodorkovsky added: “My conclusion of the dependence of the judge is based not only on the scandalous statement by the prime minister,” referring to Prime Minister Vladimir Putin’s remarks during his annual televised Q&A session on Dec. 16. In the session, Putin compared Khodorkovsky to American Ponzi-scheme operator Bernie Madoff.

Khodorkovsky also hinted at having other information indicating that judges had been pressured, but said he would not reveal it before a new investigation is launched.

He also criticized the courts for “increasing legal nihilism,” including “broad construction of the criminal law.” Khodorkovsky gave several examples of such “nihilism,” citing conclusions from the verdict. “Where could this pseudo-judicial practice lead the country if the court states that a deal, as a result of which a vendor got bullions in profit, was ‘unpaid confiscation’ or a theft?” he wrote.

The jailed businessman believes that the president should send a relevant appeal to the country’s Constitutional Court. “That would put an end to the attempts to artificially criminalize ordinary economic turnover.”

Khodorkovsky added that when the court impudently ignores the law and the president has no opportunity to change the situation, the country is in danger of facing a constitutional crisis. The businessman expressed confidence that Medvedev is aware of the attitude of Russian intelligentsia towards “demonstrative force and court lawlessness.”

However, in an interview with Bloomberg Television, Medvedev said: “A president of any country, including Russia, should not discuss any individual cases, just because it would mean interference in the court system. I believe that all the talk about the shortcomings of our judicial system as well as any attempts to bring pressure, including on me as the president, are totally destructive in this context because they make everyone else think that the judicial and legal system in Russia is so imperfect that you can simply tell the president or someone else ‘change the sentence for Khodorkovsky or someone else, and then we’ll believe that your legal system is not that hopeless, that it is kind of working.’ But that would be unacceptable."

After Mikhail Khodorkovsky appeals to the president in a letter, Medvedev answers, in a way.

Despite his legal training, President Dmitry Medvedev said he did not consider himself an expert in the field of criminal law and procedure, and invited the expert community to prepare a legal analysis of court decisions in the case of Mikhail Khodorkovsky, the former head of the Yukos oil company. He noted that both appeal and pardon procedures could be used in Khodorkovsky’s case, while refusing to comment on the case itself.

“Apparently, both appeal and pardon procedures can be used, but this is another matter,” Medvedev said. He thinks few people are familiar with all materials related to Khodorkovsky’s case. “I think not a single person sitting at this table has read all of the materials related to the cases of Khodorkovsky, [Sergei] Magnitsky or other such cases simply because this is impossible. And yet, we all have our ideas, some think one way, others think differently, some are convinced that courts are delivering the government’s political order, others are of the opposite opinion, there are such people, too, they call for tougher repressive measures, criticizing our government as too liberal. They think such people should be punished to the fullest extent of the law,” Medvedev said.

“But I would be grateful if the expert community prepared a legal analysis of the relevant court decisions. This would be of certain value, because any person willing to sort something out has to rely on expert opinion. Frankly, I don’t consider myself an expert in the field of criminal law and procedure, I have never practiced it. All my life I’ve been doing civil law, commercial law, family law, this is where I know my way around, even despite a 10-year gap in practice, or rather 11 years already,” Medvedev added.

As the head of state, Medvedev said that it was very important to know the opinions of different people on these matters. “This is what I would do for now, without saying trivial things that the case is being appealed,” Medvedev concluded.