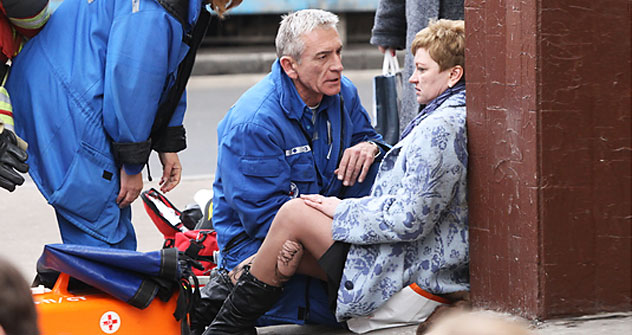 Psychological implications of terrorist acts continue long after the perpetrators have been found.

The Investigative Committee of the Russian Federation reported on Jan. 30 that it had identified the person responsible for the bombing at Moscow’s Domodedovo airport that killed more than 30 people. The investigation reported that the bomber was a 20-year-old from the North Caucasus. Investigators believe that the terrorist attack was aimed primarily at foreigners, which is why the explosion was carried out in the arrivals hall. Most of those killed and wounded in the explosion, however, were Russian.

Identifying the perpetrator is only a small step in the healing process. Psychologists say that that thousands of Russian citizens have been psychologically traumatized by the events, and it will be a long time before they can recover. Even those who had no personal connection to the explosion are also experiencing stress. Sociological data shows that more than 80 percent of Russians fear being a victim of a terrorist attack.

According to Zurab Kekelidze, acting director of the Serbsky Institute for Social and Forensic Psychiatry, the “grief reaction” of people who have lost loved ones in a terrorist act has three stages. The first month is characterized by denial – the person refuses to accept the death of their loved one, and “talks about the deceased as if they were still alive.” Then between a month and a year following the moment of death there is “disorganization” – the relationship that they had with the deceased person is destroyed. In some cases, this is accompanied by personality deterioration and a drop in social status. Finally, there is the “reorganization” phase when the it is accepted that the loved one is gone and life can move forward. “It is impossible not to experience grief,” Kekelidze said, adding that doctors can only help prevent the other conditions that accompany stress, such as stomach ulcers, diabetes and skin diseases.

Those who have been wounded in a terrorist attack or who witnessed one are also affected by stress. For the first three days, people experience an “acute reaction” – feeling either excited or numb. Many are troubled by insomnia, loss of appetite and “vivid recollections of what happened,” said Kekelidze. Witnesses of a terrorist act usually go to see a psychologist on the fourth or fifth day, when their disorders are fully manifested. “Those who did not suffer physically in the explosion also go,” said Kekelidze. “Anyone who says it isn’t affecting their health should be the first to go to see their doctor.”

Some people deliberately keep the fact that they witnessed a terrorist act secret; they are afraid others will think there is something wrong with them, since many believe it is impossible to live through a terrorist attack and remain normal. Psychologists disagree: It is possible to “reprocess” a traumatizing situation. For example, people who survived a house fire will, a few years later, laugh about “how they had run naked out onto the street.”

Stress is also experienced by those who have not suffered personally in terrorist acts. According to data from the All-Russia Public Opinion Research Center (VTsIOM), after last year’s explosions in the Moscow metro, 82 percent of Russians were afraid of becoming victims of terrorism—about the same level of anxiety following the explosions at apartment buildings in Moscow in Fall 1999, when fear of being part of a terrorism attack rose to 80 percent. Muscovites, residents in the southern regions of Russia and pensioners are more afraid than others of falling victim to an act of terrorism. About one-third (36 percent) believe that the authorities are prepared to protect citizens from new terrorist attacks.

At the same time fears of being a victim of terrorism are on the rise, interest in news related to terrorism has fallen. Madrudin Magomed-Yeminov, head of the department of extreme psychology at Moscow State University, said society has become more indifferent to reports of terrorist acts than before. “According to our colleagues’ research from March 2010 after the explosions in the Moscow Metro, 60–70 percent of Muscovites were not interested in news related to the incident and were trying to play down these events,” said Magomed-Yeminov. “That is not to say that people were not afraid of terrorist acts, but reports of these events produced almost no emotional response to them. In the 1990s, about 30 percent of respondents reacted to reports of terrorist attacks the same way. The lack of emotion is a defense mechanism at a time of constant terrorist threats. In the 1990s, people perceived terrorism as a temporary phenomenon. Now they understand that terrorist acts are not stopping, but they are turning their attention away from these events so as not to feel helpless.”