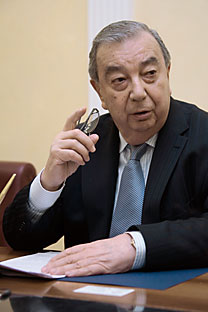 Yevgeny Primakov, president of the Russian Chamber of Commerce and Industry, academic and member of the Russian Academy of Sciences. Source: RIA Novosti

With all the staggering developments – waves of demonstrators are calling for the resignation of President Hosni Mubarak, whose regime, despite rapid economic growth, has not resolved the problems of poverty, high unemployment and rampant corruption – it seems that certain conclusions can already be drawn.

First, the events in Egypt are not religious but social. In our assessments we very rightfully have been focusing on radical Islamism, which has been gaining momentum in the Muslim world, and have somehow forgotten about the possibility of “traditional” social revolutionary outbreaks. Apparently we began to think that the process of revolutions, which topples conservative, authoritarian regimes, became a thing of the past, including in developing countries. The events in Tunisia and Egypt indicate that this is not true.

Second, while concentrating on the danger of radical Islam, we have underestimated the affect modernization has had on socially advanced Muslim countries. In the multi-million-strong revolutionary movement, which first awakened Tunisia and then Egypt, a major role was played by spontaneity “supported” by online and mobile phone communications.

Third, the lack of Islamic slogans among demonstrators in Egypt as well as in Tunisia stands out. And this is despite the fact that the Muslim Brotherhood has fairly strong positions in Egypt. This is a fairly significant indicator, but does not quite guarantee that Islamists won’t try riding on top of the revolutionary wave. Incidentally, just such an attempt was made by the Muslim Brotherhood during the revolutionary events of 1952-1953 in Egypt. Then, Gamal Abdel Nasser was able to suppress the organization’s activities. How the events will unfold this time around, only time will tell.

Fourth, the events in Egypt are of course not unfolding under the same scenario as in the 1950s. Then, the main role was played by the army, with the involvement of the Free Officers organization. Today, the army’s role will, in a best case scenario, be neutral.

Fifth, I am currently in Washington, where meetings concerning the Middle East are being held with US colleagues. Judging by their mood, as well as by US press reports, which include plenty of descriptions of the developments in Egypt, one can at least sense a feeling of caution. Questions are being asked, including how the events will affect Egypt-US relations – after all, the US has considered Mubarak’s regime to be one of its main sources of support in the Middle East. Egypt has been receiving annual aid payments of $1.5 billion, mainly for military needs.

Of course, the turbulence forces the question of whether or not the events in Egypt will influence the situation in the Arab oil-producing states. Questions also arise about how these events will affect the Arab-Israeli settlement – Egypt was the first Arab country to sign a peace treaty with Israel, in 1979. The questions are plentiful, and in time will be answered.

The text is originally published in "Rossiyskaya gazeta"; translated by RT.com