Authoritarian capitalism and the Chinese scam 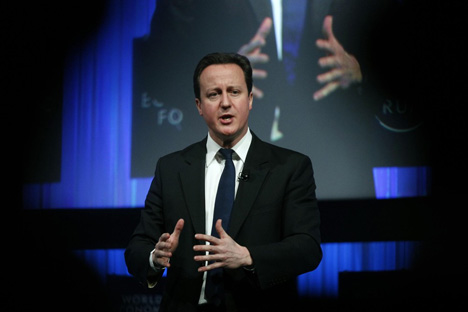 Western leaders are betting that values can trump profits, but chances are, they are wrong.

British Prime Minister David Cameron gave a remarkable speech at the World Economic Forum in Davos on Jan. 29 that threw into sharp relief the clash of economic systems between east and west.

"There's one final thing we in Europe need to have more confidence about - and that is our values. The value of liberal democracy used to be sacred in the west. Now some people are doubting it. They've seen authoritarian capitalism and the way it works. They see political leaders with the powers of juggernauts, forcing decisions through and they argue that against this, our liberal democratic values look outdated, ineffective - even an obstacle to success," said Cameron.

In the west, the divide between the state and private business is axiomatic to the free market system and codified in law. But western leaders are becoming increasingly unsettled because in the emerging markets, this divide doesn't exist.

China is a command economy (one of the last left in the world) and in Russia, too, the Kremlin has, as a matter of policy, largely erased the line between them to create what has been dubbed Kremlin, Inc.

This model manifests itself in many ways. In China's case it means the state can set exchange rates and hold wages down by fiat. The result is turbocharged growth and a relentless siphoning of dollars from west to east.

In Russia, Prime Minister Vladimir Putin routinely calls the leading oligarchs in for one-on-one meetings where they have to present their investment plans to make sure they dovetail with the state's policy. But this is a quid pro quo relationship, as the Kremlin actively lobbies for business interests abroad, linking deals to energy contracts and adding on state-backed weapons deals to create a package that is anathema to western politicians.

China is neither a more productive producer than America, nor are it's goods of better quality. It beats out all comers simply because its goods are far, far cheaper than any other country can possibility produce. Even Russia is unable to compete with China. Russia has signed off on the IMF's Article VIII, making the ruble fully convertible. It has a free labor market and runs a remarkably open trade regime. So, despite the advantages of Kremlin, Inc., Russian companies still have to compete on market terms and things like productivity and cost still count enough to make diversifying the economy difficult.

China's exchange rate is a scam, and in any other age it would have caused a war. But liberal democratic governments are powerless to act, as they are bound by the very rules that the eastern powers are breaking.

The upshot has been a massive transfer of capital eastward, while the east is, in addition to its cheap toys and copious oil, exporting its unemployment and social strife west. As long as these distortions remain tension in the global economy will mount and ultimately it must end in tears.

That said, neither Beijing nor Moscow are blind to the problems they are causing, and both seem well aware that the current set up is unsustainable. Russian President Dmitry Medvedev has mounted a campaign to modernize Russia and repeated this call again during his Davos speech. And the Chinese are actually doing it, investing into everything from computer chip production to wind farms, where it is already emerging as a world power in many of these products. The plan is to be to eventually wind down the imbalances and compete head to head, western-style.

But it will be years before either country is ready to swap "authoritarian capitalism" for the free market kind. In the meantime, western leaders are looking increasingly uncomfortable; Cameron's speech came over more as a plea for help than a call to arms: "It's these [liberal] values that create the climate for innovation. Our values create the right climate for business too. If you're looking to set up a headquarters abroad, are you going to invest where your premises can be taken away from you? Where contracts are routinely dishonored? Where there's the threat of political upheaval? Or are you going to invest where there are property rights, the rule of law, democratic accountability?"

No business likes political instability, unpredictable laws, corruption or bad corporate governance. But to answer Cameron's question, companies will always set up their headquarters first and foremost where they think they can earn profits, and tolerate the rest.