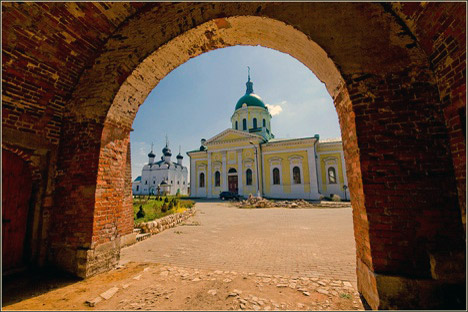 According to legend, the town’s name comes from the death jump (“zaraz”) of the 13th century Duchess Eupraxia. Rather than be taken as a concubine by the leader of the approaching Tatar horde, she threw herself and her baby son from the tallest tower in the battlements. The Russian poet, Lev Mei, whose historical drama, “The Tsar’s bride” was the basis for Rimsky-Korsakov’s opera of the same name, wrote a poem that popularized this story. Calling Zaraisk “a grandfather-city, above Osyotr’s waves,” he describes the town as looking cheerfully from its hilltop into the river:

“As if quite forgetting the tragic old tale

Of how you were founded and over whose graves.”

The bus station is in the old merchants’ trading rows close to the kremlin, whose 16th century walls and towers surround the cathedrals of St. Nicholas and John the Baptist. 17th century St. Nicholas, with its ornate crosses and carved limestone doorway, is closer to the eastern gate. The larger, domed John the Baptist church in the center was built in 1821 and was the local movie theater for most of the 20th century. It has now been restored in vibrant colors with a copy of Alexander Ivanov’s famous “Appearance of Christ to the people” above the stained glass fanlight of the southern doorway.

The Kazyonnaya tower, to the right of the eastern gate, was once the storehouse for weapons and gunpowder. The tower on the southwest corner, near the Yeorgievskiye Gate had a secret underground passage for escaping during a siege. The Karaulnaya tower on the northwest corner was the look out point. From here, the banks and lanes slope down to the Osyotr River.

Going out of the main St. Nicholas gate, visitors pass the site of a prehistoric settlement. Archaeological excavations unearthed some important ice age figurines and a carving of a bison, made from mammoth ivory.

You can see a diorama of Paleolithic Zaraisk in the kremlin museum in the crumbling Trinity Church behind the old trading rows. There is also a great little diorama of the Polish nobleman Alexander Lisowski’s Cossack forces capturing the kremlin in the 17th century. Zaraisk’s Prince Pozharsky (whose statue stands in front of St. Basil’s on Red Square in Moscow) fought against the Poles at the end of the “Time of Troubles.” There are memorials to Pozharsky on the Zaraisk kremlin wall and near the trading rows.

The kremlin museum also contains a collection of local portraits of merchants and noblemen. Some of the merchants’ wives are particularly striking, with their beadwork collars and shrewd expressions. Aristocratic, mercantile and peasant artifacts complete the displays.

Opposite the museum is the war memorial, with a bronze statue and eternal flame. Along Pervomaiskaya Ulitsa, the “main” road, there are several fine old mansions, some badly in need of repair. These 19th century merchants’ houses typically have a brick and plaster lower level and a wooden upper storey. In Zaraisk, Catherine the Great decreed that the streets should be laid out in an orderly grid, as she did in several provincial Russian towns. This grid also contains the early 19th century Ilinskaya church and an old brick water tower.

On Ulitsa Dzerzhinskogo near the statutory Lenin monument, surrounded by blue fir trees, there is a museum dedicated to the Russian sculptor Anna Golubkina, who was born here on Jan. 16, 1864. Golubkina initially worked as an assistant to Auguste Rodin and later produced expressive sculptures of many famous Russian figures. Her most famous public work in Moscow, where you can also visit a studio museum, is the wave relief over the doorway of the Moscow Arts’ Theater on Kamergersky Pereulok. She returned to Zaraisk and died there in 1927. Five years later, Golubkina’s house in Zaraisk became a museum, the first of its kind in Russia. It is now a branch of the town museum and contains a few original works, including a colorful vase and touching sculptures of her mother and grandfather, together with several copies. A third branch of the town museum, in a nearby village, is dedicated to the writer Fyodor Dostoevsky, who lived there in the 1830s.

Down the road, near the cemetery where Anna Golubkina lies buried, there are more 18th and 19th century mansions and the striking, blue-domed Annunciation church. There is a memorial nearby to soldiers killed by Polish forces in 1606. From here, visitors must cross the Monastyrka River, a little tributary of the Osyotr, to return to the bus station.

Buses leave about twice an hour from Moscow’s Vykhino bus station. The journey takes about two and a half hours and costs 240 rubles each way.

The cosy, wooden Izba café on Ulitsa Karla Marksa is close to the bus station and makes a great place to have cup of coffee or bowl of homemade soup before heading back to Moscow.

The three branches of the town museum, in the Trinity church, Golubkina’s house and Dostoevsky’s village, are open 11am-5pm, Tuesday to Sunday and cost 40 rubles each.