Bollywood bridge gets a new sparkle 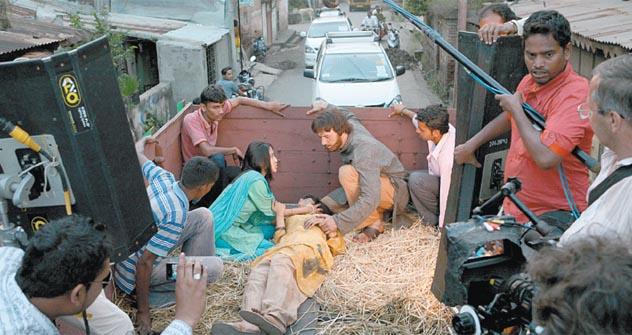 When Medvedev came to India last year, he visited a film studio in Mumbai. Not just stars, but joint ventures flowed from Bollywood. Source: kinopoisk.ru

When Medvedev came to India last year, he visited a film studio in Mumbai. Not just stars, but joint ventures flowed from Bollywood.

In this story, there are no full stops. Russia’s love affair with Bollywood continues. When the youthful Russian President Dmitry Medvedev dropped in at the famous Yash Raj Studios in Mumbai during his visit to India in December last year, sparks flew. A fan of the legendary Raj Kapoor, who enjoyed an iconic status in Russia, it was sheer joy for Medvedev to see his grand-daughter Kareena Kapoor dance with her co-star Shahrukh Khan on the sets of Ra.one, an upcoming Hindi superhero flick.

“We wanted to shoot the song in his presence, but due to security problems, we just showed him the dance steps we were rehearsing,” said Khan while recalling his chat over coffee with the Russian president.

Medvedev spoke fondly about a 24-hour television channel dedicated to Indian movies in his country. “Russians love the bright, original, ethnic-oriented movies made in India. The symbols depicted in the movies are easy to understand,” he said. “We find the way you dance very interesting and fascinating. The love for Indian cinema is long-standing in Russia," he said.

But the brief visit to the film studio was not simply nostalgia and tinsel town talk. Business and diplomacy deftly blended with showbiz. Medvedev spoke about an Indo-Russian venture entitled ‘The Hindu’, starring Indian actress Panchi Bora and popular Russian actors Yegor Beroyev and Marat Basharov, which is doing well in cinema halls in his country. The film is about a great surgeon who tries to create a new implant to make broken bones heal quickly. Russians first saw it in October, 2010 on the Rossiya 1 channel. The film is now going to be released in India, with two channels, having purchased rights to screen it. DD plans to show the film in 150 countries.

Clearly, many film moguls in Russia are thrilled by the prospect of cooperation with the world’s biggest film factory. “We are ready to provide good conditions for the work of Indian film-makers on our market. Incidentally, we are all interested in regulation of the cinema, in the sphere of copyright and financing opportunities being more transparent, more understandable and more universal,” Medvedev said.

Another idea that cropped up during the meeting was to make a sequel to the Soviet-Indian film “A Journey Beyond Three Seas”, based on the travel notes of Afanasy Nikitin, a Russian merchant from the town of Tver, who visited India in the 15th century. “I promise that the love affair between our films and your country that began 60 years ago will continue,” Randhir Kapoor, son of Raj Kapoor, star of Awara (The Vagabond), said.

Awara became so popular in Russia that it continued to shine on the cinema screens until 1986. It was seen by 10 million people. Looking at it as a good alternative to Hollywood, the Soviet government bought 250 Indian films at one stroke. Jawaharlal Nehru, India’s first prime minister, joked that Kapoor was better known in Russia than he was.

Building upon this legacy, film makers are thinking up joint projects. “Of course, India and Russia have very different audiences,” says Sapronov, general director of RWS. “Making a joint project that would interest both you and us is a challenge. But opportunities for cooperation do exist.”

“Russia is looking for various forms of cooperation with India. Because Indian cinema was hugely popular in the USSR, it was decided to start from there. India produces as many as 1000 films a year, more than Hollywood,” says film critic Daniil Dondurei.

"Medvedev naturally believes that India’s leadership could be adapted to our interests even though Indian films are not yet bought for distribution,” he added.