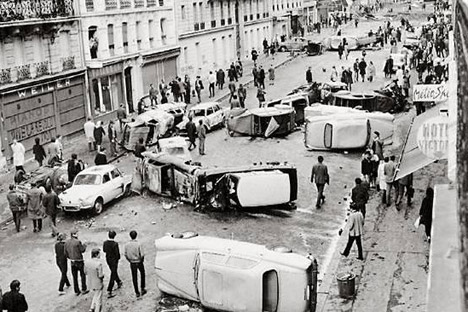 Russia isn't like Egypt - not even by the standards for revolution set out by Vladimir Lenin.

Just a month ago, a Washington Post editorial shared with us some bad news: Freedom is in retreat around the globe.  Helping the Post's editors arrive at such a sad conclusion was a survey by Freedom House that claimed the situation with the world's human rights has been deteriorating "for the fifth consecutive year."  Did it occur to the clowns from the Freedom House that the timing of their supposed trend conspicuously coincided with the George W. Bush administration's policy of advancing democracy at a gunpoint?

It is therefore quite understandable that the eruption of street protests in Egypt has lifted the spirit of thousands of professional democracy promoters in Washington, DC.   And rightfully so: It's not every day that a "pro-democracy" crowd is challenging the rule of a bloody Middle Eastern tyrant.

Yet, at the risk of sounding obstructive, I have a couple of clarifying questions for the folks who are more versed than me in the science and art of democracy promotion.  The first question: What kind of proof do we have that the mob regularly gathering at the Tahrir Square in Cairo represents a bona fide "pro-democracy" movement?  Now, there is no question that this movement is anti-Mubarak, but history provides us with enough examples of anti-movements -- the 1789 French Revolution, the 1917 Russian Revolution, and 1979 Iranian Revolution come to mind immediately -- that resulted in regimes that were arguably more brutal than the ones they replaced.  What exactly did the Tahrir Square protesters do or say to pursuade us that they were not simply anti-Mubarak, but pro-democracy?

And this leads me to my second question.  In democracy, the voice of majority rules.  Do we have any evidence that the protesters' demand for Mubarak's resignation reflects the opinion of the majority of Egyptians -- and not of a particular minority faction, however large, organized and determined?  This is not a fancy question.  We all remember mass protests that engulfed the streets of Tbilisi, the capital of Georgia, in the fall of 2007.  Many, myself included, believed that the days of Georgia's embattled president Mikheil Saakashvili were numbered.  But Saakashvili held on, and the protests have gradually stopped.  Why?  Because as much as Saakashvili was hated by the Georgian intellectuals running the show in Tbilisi, he was equally popular in the countryside where the majority of Georgians live.

I'm not an expert on the Middle East: I don't speak Arabic and my only personal experience with the region is restricted to a short vacation in Morocco.  (Yes, I know that a similar lack of knowledge of the Middle East doesn't prevent U.S. democracy promoters from comfortably issuing labels like "dictator", "pro-democracy", "moderate", "radical", etc.  But I can only speak for myself.)  I didn't plan to write about the Egypt protests and I changed my mind only in response to repeated attempts to bring parallels between the crisis in Egypt and the situation in Russia.

This, of course, shouldn't come as a surprise.  Ever since the glorious times of the Orange Revolution in Kiev in November 2004, every case of mass disturbances in the post-Soviet space -- and now even in the Middle East-- has been exploited as an excuse to stick the proverbial Mirror of the Russian Revolution into Russia's face.

To assess whether Russia is ready for a "revolution," I turned to a man with an impressive track record of launching Russian revolutions.  Obviously, I'm speaking about Vladimir Lenin whose definition of the "revolutionary situation" -- presented in the 1915 article "The Collapse of the 2-nd International" -- still remains the golden standard in the field.

Lenin describes three major conditions characterizing a "pre-revolutionary" situation in a given country.  The first is the inability of the ruling class to execute its authority. It is plain that with the approval ratings of Russia's top two leaders oscillating around 60 percent, the Russian ruling class remains in full control of the country.  President Medvedev's attempts at "modernizing" Russia's economic and political institutions, however clumsy at times, still reflect the ability of the Russian elites to adjust to the changing conditions on the ground.

The second condition identified by Lenin is the sharply increased ("beyond the usual level") impoverishment of ordinary citizens. True, the economic crisis has decreased the living standards of ordinary Russians and further widened the already large gap between the wealthy and the poor.  Yet, at the average per-capita income of about $14,000, it's a huge stretch to call Russians impoverished "beyond the usual level."  Characteristically, over the past couple of years, only two significant mass protests, in Vladivostok and Kalinigrad, have been marked by economic demands, and Vladivstok was obviously a special case.  At least for now, the authorities have enough financial resources to prevent "economic" grievances from reaching the boiling point -- by increasing the pensions and salaries of state workers.

The third condition is the dramatic increase in political activity of ordinary people, their "readiness for spontaneous revolutionary actions," as Lenin called it. This is definitely something that deserves consideration. There is no question that mass political activity is on the rise in Russia.  However, so far, the most prominent anti-government movements, such as, for example, the Defenders of the Khimki Forest, have been alternating their protest actions with clever PR campaigning and occasional talks with the authorities.  And Medvedev is somewhat decreasing the likelihood of "spontaneous" mass actions by holding well-publitized meetings with his Council on Civil Society and Human Rights, where "hot" topics are allowed to be at least publicly articulated.

The close attention the West is paying to the regular episodes of a reality show mistakenly called "the rallies of the Russian opposition" is actually purely self-serving, as it allows the democracy promotion crowd to justify its own existence.  The spectacular clashes between wooden-headed Article 31 strategists with equally wooden-headed omonovtsy may make great news in the Western media, but they can't hide this simple math: 1,500 protesters gathering for such meetings represent less than a two-hundredth of a percent of the 10 million-strong population of Moscow. This is not something that the Kremlin should worry about.

What the Kremlin must worry about is the repeat of the demonstration that took place on the Manezhnaya Square on Dec. 11, when a few thousand youngsters showed up out of the blue (or so it seemed) with the banners "Russia for Russians, Moscow for Muscovites!" and "Moscow is not the Caucasus!"  No efforts should be spared to prevent converting this, so far, one-off episode into another reality show.  For the genre of this show won't be Russia's "democratization."  It will be Russia's disintegration, something that even the evil Lenin didn't want happening to Russia.

Eugene Ivanov is a Massachusetts-based political commentator. This article is abridged from the original version, which appears at his blog, The Ivanov Report.