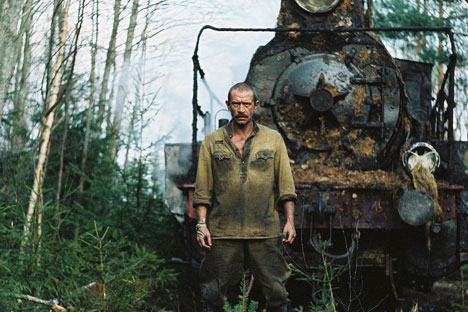 Several recent Russian films have involved the Gulag, but only as scenery. Is it possible to make a good film about the Gulag itself? And, more importantly, is it necessary?

In September, the Russian Oscar Committee selected Alexei Uchitel’’s new film, The Edge, as their official entry for the Best Foreign Language Film. The film did not make the Academy’s shortlist, although it did become a finalist for the Golden Globe, losing to the Danish film In a Better World.

The Edge is an unusual film for several reasons. Set in late 1945, it tells the story of a war veteran suffering from concussions who arrives in a Siberian labor camp populated by deported enemy nationalities. The veteran, Ignat, wants to pursue his passion for working on locomotives. He slowly gets involved in the workings of the camp and disturbs its delicate balance when he discovers a German woman who has lived through the war on a nearby island. Known mostly as an art house director, Uchitel’ received backing from Pervy Kanal for his film and declared in interviews that he had made a “Hollywood-style” movie. Daria Goriacheva of gazeta.ru proclaimed that the film was “the best in the history of our new cinema to Russify the form of the Hollywood blockbuster.” In doing this, The Edge nearly became the first Gulag blockbuster.

Uchitel’’s Edge is the latest in a small group of recent Russian films about Stalinist camps. In May 2007, Russia’s leading film journal, The Art of Cinema, published a roundtable that declared the lack of Gulag films represented “a significant absence” in Russian culture. Daniil Dondurei, the journal’s editor, worried that “that our country has not outlived the tragedy of Stalinism as a national catastrophe” because too many Russians treat the Stalinist past, particularly the Gulag, with indifference. In the same forum, historian Alexander Daniel argued that Russians have not yet atoned for Stalinist crimes. A good Gulag film, the participants agreed, might help matters.

The journal’s editors convened the roundtable because Nikolai Dostal’’s television series Lenin’s Will, based on the life and work of Varlam Shalamov, had just aired. It was once of a handful of serials set in the Gulag. Lenin’s Will followed on the heels of Dostal’’s Penal Battalion (2004-2005), which explored the use of Gulag prisoners as cannon fodder during World War II.  Its scriptwriter, Eduard Volodarskii, had also penned a television adaptation of Shalamov’s Gulag stories, 2005’s Major Pugachev’s Last Battle. In January 2006, the Rossiia television channel aired a 10-part adaptation of Alexander Solzhenitsyn’s First Circle, which led the ratings and attracted a lot of media coverage. These small-screen explorations also won awards. Lenin’s Will received the Golden Eagle, Russia’s equivalent of the Golden Globes, for best television series of 2007 and Penal Battalion captured the TEFI, Russia’s Emmy, for best series of 2005 (Major Pugachev’s Last Battle was nominated). First Circle picked up a special TEFI bestowed by television critics for becoming the “tele-event of the year” in 2006 and Solzhenitsyn won a TEFI for best script. Some of the best television series to appear in the last 10 years have been adaptations of Russian literary classics. Certainly these productions attest to this characterization: the episodic nature of many Russian works, including Shalamov’s Kolyma Tales and Solzhenitsyn’s novels, make for good television.

Big screen Gulag films have not proven as successful. Vladimir Iakanin’s 2006 Lucky was about a young naval officer sentenced to 25 years in the camps. When he arrives, the officer—nicknamed “Lucky”—gets involved in a “bitches’ war” between two rival criminal gangs. He manages to survive and even earns early release. The film was anything but lucky at the box office: It received a limited release and appeared on only 26 screens. Dostal’ continued with the Gulag theme, shooting a 2009 feature film, Petya on the Way to Heaven, about a mentally handicapped teenager who pretends to work as a transport policeman in a prison camp near Murmansk. Scripted by Mikhail Kuraev and based on his 1991 novella, the film won the St. George Prize at the 31st Moscow International Film Festival. The movie, whichcost $2 million to make, earned a paltry $22,000.

One year ago Nikita Mikhalkov’s Burnt by the Sun 2: Exodus seemed like a sure thing for Russia’s Oscar bid. The film, which debuted for Victory Day 2010, famously flopped, leading Mikhalkov to announce he did not want the committee to consider it. It, too, entered the world of the Stalinist camps. Mikhalkov’s protagonist, General Kotov (played by the director), survived his death at the end of 1994’s Oscar-winning Burnt by the Sun. He was instead sent to the camps. The film opens with the disgraced officer escaping from his camp after Nazi planes strafe it. Kotov eventually joins a penal battalion.

Burnt by the Sun 2 became a press sensation because it performed so poorly at the box office, taking in only $2.5 million in its opening weekend despite a bloated $55 million budget and a massive marketing campaign. It eventually earned $7.5 million. At the same time, it earned more money than any other post-Soviet film that involves the Gulag. Uchitel’’s Edge, by comparison,earned $5.1 million back of a $11 million budget.

Burnt by the Sun 2 and The Edge perfectly capture the state of the big screen Gulag film. It is no longer possible to state that there is a significant absence—the two films garnered a great deal of press coverage. Uchitel’’s film, however, is not as much about the special settlers as it is about the trains Ignat races. The deported prisoners provide mere backdrop to the thrilling sequences featuring locomotives. The fact that Burnt by the Sun 2 opens in a camp is just a convenient way to explain Kotov’s remarkable resurrection. It’s more about Mikhalkov’s belief that God returned to Russia during the war. The films employ blockbuster special effects on train races or battle sequences. Both are in many ways as indifferent about the Gulag as the roundtable participants believed most Russians are. As a result, the new Russia still awaits its first truly good Gulag movie.