Discussions with Yevgeny Shestakov: The many faces of Islam 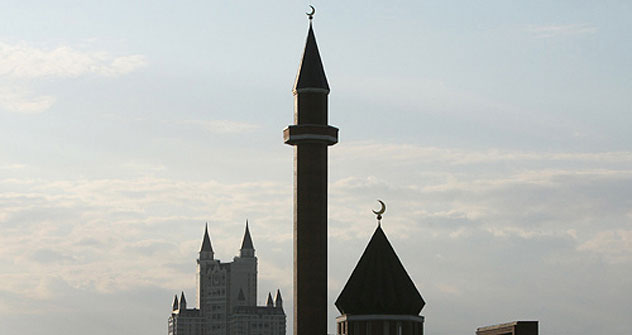 RBTH launches a new feature: Yevgeny Shestakov talks about today's most important issues with respected scholars and analysts. In this discussion, he debates Islam's role in the world today with Alexander Ignatenko, head of the Russian Institute of Religion and Politics.

As Muslims become an increasingly prominent part of Europe’s social landscape, sociologists and politicians try to understand how non-Muslim Europeans and Muslim communities can co-exist.

Yevgeny Shestakov: Why do you think Islam arouses so much controversy among non-Muslims in Europe and the United States?

Alexander Ignatenko: It’s true that anti-Islamic sentiment is quite widespread in Europe these days.  But there are Islamophiles out there, too. For instance, 66 percent of France’s population have a negative attitude toward Islam, whereas about a quarter (23 percent) feel positively and 11 percent have no opinion.

On the other hand, consider the attitude of Europe’s Muslim communities toward their non-Muslim fellow citizens: In France, 41 percent of Muslim residents have a favorable attitude toward non-Muslims while 58 percent have an unfavorable attitude. In the UK, this gap is much wider: 23 percent and 62 percent, respectively. It is important to realize that the animosity in Europe between local populations and immigrants from Muslim countries is on the rise.

According to Chancellor Angela Merkel of Germany, the “multicultural approach, saying that we simply live side by side, and live happily with each other, has failed, utterly failed.”

What we’re facing in reality is a clash of cultures rather than their harmonious and meaningful co-existence. As a result of globalization, a burka-clad girl from a village in Afghanistan or Turkey and a female student with a bare midriff can find themselves walking on the same street in Paris. The culture clash has nothing to do with one set of values being right and the other wrong; it happens because the two girls were shaped by different cultural milieus.

There are several reasons why sociologists and politicians are so concerned by European attitudes toward Islam and Muslims’ attitudes toward European culture. First of all, the percentage of Muslims – both immigrants and native-born converts to Islam – has increased sharply in recent. Another reason, I think, is the emergence in Europe of anti-Islamic and anti-immigrant parties and movements, such as [Geert] Wilders’ Freedom Party.

Also, it seems that immigrants from across the Muslim world are more reluctant to integrate with the native population of their adopted countries, in comparison with representatives of other traditions

Y.S.: Why do you think the term “militant” used these days mainly in reference to Islam?

A.I.: In my view, this and other epithets – including “fundamentalist,” “radical,” “extremist,” “orthodox,” and “moderate” – all stem from a desire to see Islam as a multi-faceted religion divided by inner conflicts.

It’s also important to note that the term “militant” makes it possible for politically correct Europeans to avoid accusing Islam per se of extremism. So when speaking of recent terrorist attacks in Paris, London and Madrid, Europeans can make it clear that those acts of terror were committed by militants who hijacked Islam to achieve their own political ends.

Y.S.: Would you agree that radical Islam has turned into a social, rather than religious, phenomenon?

A.I.: We could assert that the traditional form of Islam was integrated into European culture, or coexisted with it peacefully. Later on, due to globalization and as a result of targeted operations by Islamic centers of power, other forms of Islam were introduced into Europe. As a result, both among traditional Muslims and new converts, extremists have emerged who are ready to commit acts of terror against non-Muslim fellow countrymen.

Y.S.: Can a secular, democratic state resist radicalism? Or this is a threat that only a totalitarian state can handle?

A.I.: That’s a good question. A good example to use would be a comparison of Iraq under Saddam to post-Saddam Iraq. There was almost no radicalism in the country under his watch, but the introduction of “democracy” there triggered a fierce sectarian war between Sunnis and Shiites, as well as an anti-Christian genocide.

Pakistan is another revealing example. Under the heavy-handed General Musharraf, the military was able to keep local Islamic extremists at bay. But the Taliban resurged after a democratic leader, Asif Ali Zardari, was elected president of Pakistan a few years ago, and there have been almost routine suicide bombings ever since.

Y.S.: How can we deal with the problem?

A.I.: Europe is now involved in a painstaking search for solutions to the many problems it faces. Admittedly, not all the solutions proposed have proved workable, and we’ve seen expressions of Islamophobia. Having said that, I believe the European Muslims have a big role to play in resolving the existing conflicts. Many of them hold that Islam and terrorism are incompatible because Islam is a religion of peace. To quote the Holy Koran, “Produce your proof if ye are truthful” (Surah 2 (al-Baqarah), Ayah 111).

Dr. Alexander Ignatenko is the head of the Russian Institute of Religion and Politics and a member of the Presidential Council for Interaction with Religious Associations and the Council for Foreign and Defense Policies. He specializes in Arab and Islamic studies and has written extensively on various aspects of Islam.