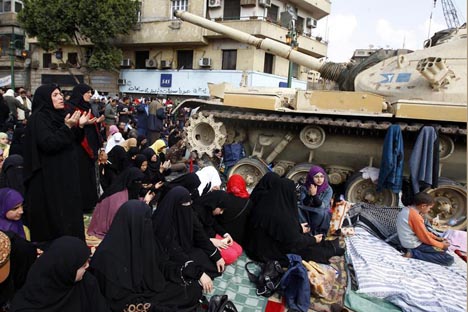 Russian sociologists and political observers wonder if there are lessons for their country in the Middle East, but the situations are quite different.

The spate of uprisings in Tunisia, Egypt, Yemen and other Arab countries has been dubbed a number of things, the “Facebook Revolution” and the “Wikileaks Revolution” among others. By bestowing labels on the events, people have tried to get to their core, to define who or what it is that drives these mass movements and inspire millions of people to take to the streets. But it is useless to try and dissect these uprisings. First of all, unrest begins spontaneously; secondly, the main driving force is young people; and thirdly, people are called to revolt through online social networks and mobile phones. At the same time, the motivations are also clear: paradoxically, the authoritarian Arab political regimes place significant value on education, seeing it as a form of immunization against Islamic extremism; at the same time, a younger and more educated generation cannot find fulfilment in the political conditions of authoritarian, corrupt regimes where social mobility is impossible and there are no functional judicial systems to encourage honest careers. Dissatisfaction soon turns into protest.

In Russia, political analysts are becoming increasingly attentive to the events in the Arab world. The reason for this is simple. Many Russian analysts have tried to project the situation onto their own country, asking: Could the same thing ever happen in Russia?

When answering this question, it is first important to acknowledge several fundamental differences between Russia and the Arab countries. The first difference is demographic: Russia does not have the same demographic pressures as Egypt, for example. Until recently, when the government started an initiative to boost the birth rate by providing material incentives, Russia’s birth rate has been falling. The working-age population is decreasing, and the number of pensioners is growing. As a result, unemployment levels are low in Russia. As the state plays a more active role in the economy, a growing number of young people are finding themselves jobs in the public sector, by definition a more stable option, where there are large number of law enforcement and security agencies.

The second difference is that Russia does not have a powerful ideological force to informally counter the secular authoritarian regime, a void that in Egypt is filled by Islam. In Russia, the Russian Orthodox Church adopts a steadfastly statist position. In general, young people in Russia are not overly concerned with politics, and Russian society as a whole, contrary to relatively widespread belief, is more focused on individual concerns than banding together to help the whole.

At the same time the youth of Russia are not without their own problems. In recent times the Russian youth have not been immune to the influence of radical right-wing and extremist ideas. According to information from the Prosecutor General, there are more than 200 extremist organisations in Russia, with a combined membership of about 10,000 people. It is mainly young people between the ages of 16-25 who make up these extreme groups. The majority of them do not belong to the fringes of society; they are either in higher education or studying at mid-level special professional institutes. In the past two years, there has also been growth in the number of crimes committed on nationalistic grounds as well as the number of extremist acts committed in public. This tendency was made especially clear at the rally in the center of Moscow in December last year. At the same time, the threat of nationalist extremism in Russia, including extremism amongst the young, is one that should not be exaggerated. The basic, predominant aim of the younger generation is still the aim of adapting to existing conditions, and to use these conditions for their own personal benefits, such as self-realization, building a career, improving their quality of life and making full use of our “consumer society.”

According to independent analysts the subculture of nationalist-extremists (skinheads) is embraced by no more than 60,000-70,000 people throughout Russia as a whole, and in reality, those with a tendency to violence actually number no more than 25,000-30,000. At the same time “youthful hot-headedness” is often replaced by a more moderate outlook with age. According to studies by the Levada Center, if extreme nationalistic views are shared by 15 percent of youth, this figure decreases to 4 percent among older respondents.

However, long-term success in stamping out extremism and extreme nationalism will not rely on the relatively high level of tolerance for other ethnicities – a legacy of the Soviet Union. Instead, it will depend on how successfully Russian youth are able to find a place and opportunity for creative progress. When viewed in these terms, the general situation in Russia still does not look as bleak as the one in Egypt.