A Quantum Center in Skolkovo 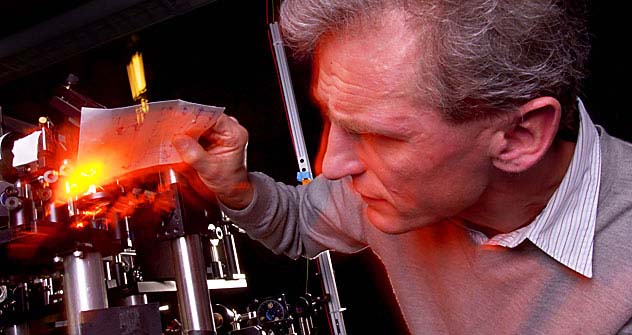 After the world learned about the construction of the Skolkovo Innovation Center in Russia, top class scientists from around the globe began frequenting our country, which, in the past, to be frank, was a rarity. But a visit from Nobel Laureate, Wolfgang Ketterle, stands out even against his background. He received the Nobel Prize in Physics at an obscenely, according to today’s standards, young age of 44 years. Who else, could one say, had first opened a new field in physics, and then closed it, without leaving any questions unanswered in the field?!

Wolfgang Ketterle arrived to Moscow, accompanied by several other young professors. Most of them work at the Massachusetts Institute of Technology (MIT), where the number of Nobel laureates nearly reaches a hundred. Why leave the global capital of science and rush to the cold and provincial, in terms of scientific breakthroughs, Moscow? Professor Ketterle told Izvestia that he is interested in the Skolkovo project, which, among other facilities, provisions the construction of a new Center of Quantum Optics and Quantum Technologies.

“The world is standing on the verge of a quantum revolution, when fundamental accomplishments in physics will be actively used to produce materials with fundamentally new and not-yet-attainable properties,” wildly fantasized Nobel laureate Ketterle. “A super-fast quantum computer, which is referred to as a revolutionary breakthrough, will soon be a reality. Quantum technologies promise huge commercial benefits in all areas – from informatics and energetics to medicine and transport. We came to Russia because it continues to provide excellent education in science. For example, the proposal for a topological quantum computer was formulated by Aleksey Kitayev of the Physical Institute of the Academy of Sciences, who has long been working in California. I am confident that knowledge and science must have many geographical points of growth. The Quantum Center in Skolkovo, the capabilities of which we would like to determine during our trip, will help not only Russia, but the entire global science community. We will visit Russia’s science centers and hold talks with the First Deputy Head of the Presidential Administration of the RF, Vladislav Surkov, and President of the Skolkovo Foundation, Viktor Vekselberg.”

As a result of this meeting, it was decided to create an International Center for Quantum Optics and Quantum Technologies, which will focus on the development of one of the most promising research directions. Ketterle’s group includes two American professors, who were educated in Russia: Mikhail Lukin and Eugene Demler. They graduated from the Moscow Institute of Physics and Technology, just as Nobel laureates Andre Geim and Konstantin Novoselov. The scientists had not worked in Russia. Immediately after graduating the Institute in the early 1990s, at the time when science was on its way out in Russia, they left to the United States, where they gained recognition, but did not forget about Russia, which, today, has given them an opportunity to reach new heights.

“In the famous MIT, 10 per cent of physics professors are from Russia, which is more than from any other country – but Russia cannot rejoice over this occasion,” says Professor Mikhail Lukin, winner of a half dozen prestigious American awards. “The Skolkovo project and the Quantum Center – are a unique idea. After a long stand still, science is being given a chance for rebirth in Russia. Soon, we will start seeing benefits from groundbreaking fundamental research in quantum physics. If we manage to create conditions for doing science in Skolkovo, the new Quantum Center will employ not only Russian scientists, who will have forgotten about emigrating, but also scientists from other countries, which, today, is still inconceivable for Russia.”

“Global science is enriched by the interaction of many cultures and many scientific universities,” says Professor John Doyle, with citation index that is even higher than that of Wolfgang Ketterle. “Russia has one of the world’s highest standards in physics education. Many young scientists come to the United States, but Russians – are the best. But, I think that if Russians get the opportunity to do physics at home, in Russia, then both the global science community and the Russian scientists will benefit.”

The only non-American in Ketterle’s team is Italian Professor, Tommaso Calarco, who is no-less interested in us than all the American researchers. The professor works in Germany and is a coordinator of the European Union’s quantum informatics programs. Unfortunately, admits Professor Calarco, currently Europe does not have any joint projects with the Russian institutes, though there are plenty of personal contacts. “Creation of a Quantum Center in Skolkovo,” said Professor Tommaso Calarco, “is creation of a powerful structure, which opens doors to joint projects. There are many successful examples in the world – the Max Planck Institute in Munich, the Center of Quantum Optics in Barcelona, and the Center for Ultracold Atoms at MIT. Skolkovo should be a part of this list”.

Incidentally, the idea of a quantum computer was first, many years ago, proposed by Yury Manin, a Moscow State University graduate, who defended his doctoral dissertation at the age of 26, received the Lenin Prize at 30, and has been living in the West for already 20 years. Yury Manin – is an academician of nearly all the academies of the world, except for the Russian Academy of Sciences, because he does not have the time to go through our bureaucratic processes. The difference between a quantum computer and a classical one is that the classical computer is built based on the “zero-one” principle, and a quantum computer – is not restricted to the “either 0 or 1” principle, but can be both zero and one at the same time. This is due to wave-particle duality of the photon, information carrier in a quantum computer, which operates with quantum bits, or quibits, which enable the use of more than one calculation at the same time – thus, immeasurably increasing the power of the computer.