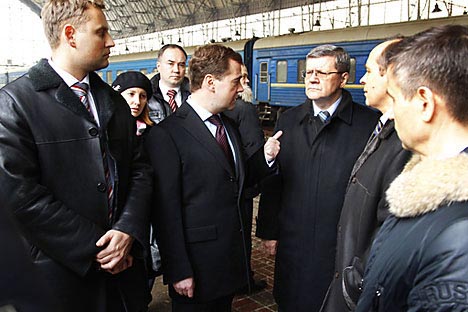 Three weeks after the the Domodedovo bombing, there are few signs that any significant changes to improve security in Russia are in the works.

Three weeks after the bombing of Moscow’s Domodedovo airport, the Kremlin is increasingly impatient with the inaction of its security agencies.

When Russian President Dmitry Medvedev paid a surprise visit to one of Moscow’s main train stations on Feb. 10, he found no metal detectors for passenger screening and also failed to encounter a single police officer along the way. Seventeen days after the attack that left 36 people dead and wounded another 200, Medvedev was forced to concede that the security promises made to the Russian people have not been implemented by law enforcement and security agencies. Exasperated, the Russian president said heads would roll and gave the CEO of Russian Railways three days to “restore some order to Moscow’s stations and come to my office to explain himself.”

This visit wasn’t the first time Medvedev has expressed frustration over the past two weeks. The president has already sacked top officials in the transportation branch of the Interior Ministry as well as certain officials within the FSB for negligence and corruption.

Yet Russian authorities took pains to project an image of responsiveness following the Domodedovo tragedy. On Jan. 28, four days after the airport bombing, the state Duma approved a new color-coded terror alert system. The system will alert the population to the current risk of terror attack using blue for low level risk, up to red for the most serious threats. The vote came two days after the United States stated their intention to abandon their own similar alert system for terror threats. U.S. Congressman Bennie Thompson, who made the announcement, said: “the color-coded system only taught Americans to be afraid and not to be prepared.”

Russia has already committed enormous sums to the fight against terrorism, mainly directed at major military operations. According to statistics published by the country’s Anti-Terrorism Committee last October, in 2010 Russian Special Forces killed 301 terrorists and arrested another 468 during some 4,500 raids against extremist groups.

Observers are highly skeptical of the solutions put forward by authorities. “There is a lot left to do,” said Oleg Orlov, director of the Russian NGO Memorial Human Rights Center. According to him, the solution to Russia’s terrorism problem can only be found at its source, in the North Caucasus region. “Solving social problems, fulfilling society’s expectations, that’s the solution,” he said. Carrying out raids to attack terrorist cells has clearly not contained the problem, and Russian authorities are slowly realizing that the “full repressive” method hasn’t worked. Mikhail Margelov, who represents the ruling United Russia party on Russia’s Security Council, admitted the difficulty authorities have in comprehending the overall question of terrorism during an interview on Radio Svoboda. “The problem is that we do not understand the phenomenon of radicalism and religious fundamentalism. If we cannot fight against the sources of terrorism, we will cure the cold and not the virus that started it. And, yet it’s the virus that must be destroyed,” he said during the broadcast. The show’s second guest, Vladimir Evseev, a research director for the Russian Academy of Sciences and the former head of research at the Carnegie Foundation, said that, in his opinion, there are “numerous technical solutions that can be undertaken.” Describing the situation in the Middle East, the expert noted that “Israel’s experience in fighting terrorism should be used because it is very rich.”

Finally, on Jan. 31, Kommersant correspondent Olga Allenova noted in the weekly newspaper Vlast that in order to implement a real anti-terrorism program, authorities must “officially recognize the failure of their policy in the Caucasus.” She added: “It’s precisely this policy that has caused terrorism to enter our lives.”

In reality, the Domodedovo tragedy was only the latest in a long line of such acts. Since 1999, Russia has suffered many deadly bombings, including two planes destroyed in mid-air, explosions on trains, in the Moscow metro, and hostage takings that have ended in bloodbaths. Authorities can at least boast that they’ve identified the enemy. Following the 1993 and 1999 conflicts between Russian forces and rebels in Chechnya, the Chechen war spilled over its original borders into many areas of the North Caucasus. Russian police and civilians are regularly targeted in attacks in the region. Doku Umarov, the self-titled Emir of the Caucasus and leader of Chechen Islamism separatists, has claimed responsibility for the majority of attacks against Russian civilians, including the Domodedovo attack. In early February, Umarov promised a “year of blood and tears” and said he had 60 suicide bombers volunteers ready to sacrifice themselves for his cause.

How much presidential anger will it take to defuse the suicide bombers in the Caucusus?

After the attack, Medvedev said that terrorism remained the “main threat to our security” in Russia. But the country still seems to hesitate when it comes to evaluating its own internal security priorities. In fact, terrorism was ranked 10th in overall threats in the military’s official doctrine published in February 2010; NATO took the first place.